The LCS Championship pitted TSM and Immortals against each other in a do-or-die series.

After two weeks of competition, the LCS Championship is only one week away from its climax. Cloud9 and Evil Geniuses took to Summoner’s Rift yesterday in a match that was much more one-sided than many expected. Today, TSM and Immortals (“IMT”) had to go head-to-head in hopes of finding a win to keep their post-season, and Worlds, hopes alive. Could TSM bounce back and find their form? Or would IMT show up as the underdogs and cause an upset? It was all on the line here and the teams were ready to bring it all in this best-of-five!

In a battle between first and seventh seed, Game One went as many expected. The early game was incredibly slow, with only a dragon taken within the first 12 minutes. Eventually, the action did come in the form of a tense team fight in the mid lane. Here, IMT got First Blood but had to trade a kill back to TSM for it. As a result, things stayed at a stalemate for a while longer, though Huni did carve out a nice lead for himself by dominating the side lanes.

With the Baron and Ocean Dragon spawned at 24 minutes, both teams were feeling more eager to fight. An inevitable team fight broke out in the bottom side IMT jungle, where TSM outplayed IMT to trade up four-for-two in kills, securing a third dragon for themselves in the aftermath. Another few minutes went by until TSM collapsed on Revenge in the top lane, killing him before rushing towards Baron. Without much of a contest, TSM claimed the Baron buff and even two kills afterward.

Against a Baron-buffed TSM, IMT had no real answers. TSM crushed IMT’s towers and Inhibitors across the map, putting IMT in a poor spot. The final nail in the coffin for IMT came at 30 minutes, when IMT tried to fight at dragon to stop TSM’s Soul. But TSM was more than ready, engaging onto IMT and slaughtering four members. Taking three Inhibitors on the back of that, TSM had everything they needed to make one last push, demolish IMT’s Nexus and claim Game One. 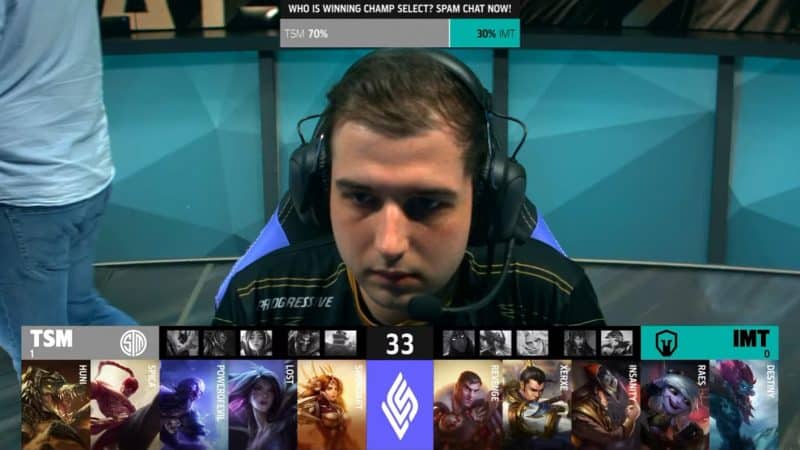 Despite a rough loss in Game One, IMT showed some much-needed signs of life in a very close Game Two. It started off well for IMT, as Destiny and Xerxe ganked mid to secure First Blood on the TSM mid lane. But TSM struck back during a team fight in the IMT jungle, where they found one kill. IMT managed to secure a Cloud Dragon but TSM was coming out ahead with a Rift Herald take and the First Tower bonus. Regardless, it was still close, with TSM winning a skirmish three-for-one, then IMT winning one three-for-one only a minute later.

If Game One lacked some fighting, the teams made up for it in the mid and late game in Game Two. Between 19 and 23 minutes, TSM won three separate team fights and eventually claimed a Baron at 23 minutes. However, IMT effectively curbed TSM by killing two TSM champions, then stalled their Soul by slaying an Infernal Dragon, though they lost four members for that effort, leading to TSM knocking down an Inhibitor too.

It seemed like TSM was in the driver’s seat but IMT wasn’t going down easily. At 30 minutes, TSM started up the Baron, but IMT collapsed on the play and found a miracle team fight to pick up two kills while losing none of their own. They seized their opportunity and took Baron to boot. But when IMT went to Baron, TSM went to dragon and took it, but IMT tried to chase them down for it. Sadly, they went too far and TSM ended up forcing them into a bad fight to kill four. After TSM grabbed Infernal Soul, it only took them one team fight to kill five from IMT and push down mid to end the game, bringing the series to TSM 2-0. 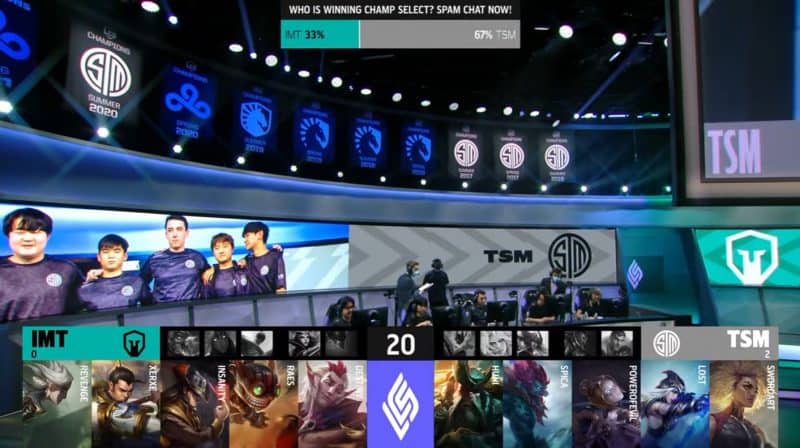 IMT lived up to their namesake, refusing death in Game Three. In the early game, it was the Xerxe show, as the IMT jungler absolutely ran over the game. He ganked top to claim First Blood onto Huni, then grabbed more kills in a top lane skirmish, and even dove Huni and Spica under their tower with the help of his team to procure two more kills. By just seven minutes, Xerxe had a 5/1 KD, which grew to 9/1 by 14 minutes after he killed Huni once more.

Meanwhile, the IMT bottom lane duo was putting on quite a show themselves. They killed Lost in the 2v2, and though Spica showed up to kill Raes to equalize the play, Raes really got off the ground because of this. With some setup from his team, he threw perfect Ziggs ultimates around the map to secure even more kills for his team so they could snowball even harder. In the mid game, TSM wasn’t safe anywhere. In lanes, in jungle and under towers, IMT found and obliterated any TSM member they got their hands on.

At 24 minutes, IMT found the pick they needed. They killed off Spica and instantly went to Baron, at first turning off of it to kill Lost, then returning to claim the Baron buff. With this, TSM crumbled under the pressure, letting their mid Inhibitor fall before losing a team fight top and conceding their entire base eventually to the eager IMT. After TSM’s Nexus fell, IMT breathed new life into this series and began the potential reverse sweep. The potential reverse sweep was on the cards for IMT, but bizarrely, they decided to choose a late-game scaling composition despite being consistently outplayed and outmacroed in the later stage of the game. Regardless, IMT wasn’t ready for the funny level one TSM had, as the five-man squad simply walked down mid, and with a good Flash hook from SwordArt’s Nautilus, secured First Blood at only 30 seconds into the game.

This was just one play but set the tone for the rest of the match. TSM only had to go towards the IMT champions and it seemed the kills came to them. A 2v2 went their way at two minutes, then TSM found another kill top at eight minutes and they even slew Rift Herald to claim the First Tower bonus at 10. In addition, Spica was right on with the dragon control, accumulating three by 18 minutes, setting themselves up for a 23-minute Soul.

Before they got to that point, however, TSM forced a fight onto IMT in the top lane, cutting down three members with no issue. Afterward, the squad picked up an easy Baron. Unfortunately, IMT’s scaling comp never got to their item spikes and were helpless against the TSM onslaught. By 26 minutes, all three Inhibitors fell, and it was a matter of time until TSM Aced IMT then blast their Nexus to take the series in a rather expected 3-1 fashion.