On the final day of MSI, everything was on the line for PSG, MAD, and Cloud9.

With only two sides able to progress, PSG went into the day in good shape, needing just one win. As for MAD, it was in their hands, especially if they beat Cloud9. As for NA, Cloud9 needed to win both matches and still face a tie-breaker in their best-case scenario.

Royal Never Give Up vs DAMWON KIA

It was an ideal start for RNG as they took the First Blood in a match they wanted to win to ensure they’d have a chance at the top spot. A hectic start saw RNG pick up the first drake, while kills were two-for-two by the 7th minute. By 10 minutes the game is close, with RNG having a tiny 500g lead thanks to a first tower take.

The game got its first big fight in the mid lane at 17 minutes. It started off well for DK but RNG was able to trade back a kill. Not wanting to risk too much, both teams lost steam and walked away. Afterward, it’s another five minutes of relative calm, with RNG claiming the third drake as they attempt to bait DK into a Baron fight. They did secure the Baron and managed to claim two early kills but DK flipped it on its head to Ace RNG. So RNG lost all their Baron buffs and DK closed the gold gap to 3k. The next fight was massive, as DK was the team to force a drake play this time. DK did claim it but RNG killed three members after an excellent Gnar engagement. With only two left to defend, RNG was free to demolish the mid lane Inhibitor.

Next, Baron respawned and RNG threw away their advantage as DK got a crucial pick, knocking down two members of RNG. With this, DK took control of the map with the sixth drake spawning. DK forced a fight again at the drake but it was RNG that won the fight. Taking down all the members of DK, they strolled into the base to take an important victory. The result saw the two sides tied at 7-1 meaning an end-of-day tiebreaker looked likely. To kick off the second match of the day, First Blood went to PSG after a 3v3 in the bottom lane dragged in mid laners to the fight. Despite multiple Flashes being used, just two kills are picked up, both of which went to PSG. Sadly for PGG, it continued to get worse, losing two more kills in the middle of the map as it started to get out of control for PGG. They finally managed to get a kill on the board, but it was instantly traded back as PSG moved to 3k ahead.

PGG managed to get a few more kills, but PSG’s lead grew to 6k by the 15th minute as they shifted to cruise control. With PGG needing to force plays across the Rift, PSG was able to get a pick ahead of the Baron. PGG re-engaged to contest and somehow managed to take down two members of PSG, losing just one in return, as PGG stopped PSG from taking a Baron. With everyone returning to the Rift, PSG decided to stop playing with their food, force a team fight and Ace PGG. They broke open the mid Inhibitor, then claimed the Baron and Soul Drake.

With Baron, PSG moved into the PGG base. During their siege, Doggo got a little greedy and killed himself in the process. With just four members left, PSG engaged, and even against only four PSG members, PGG couldn’t handle the damage. PSG eventually blasted the Nexus and secured their spot in the Knockout Stage. Just one spot remained at this stage to be claimed by MAD or C9.

Royal Never Give Up vs MAD Lions 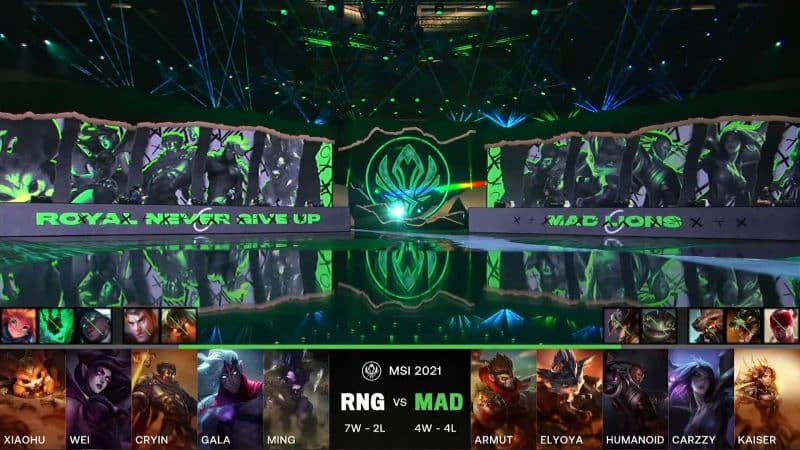 The perfect start for MAD saw them pick up a level one, 4v1 kill onto Cryin who got caught out in the MAD jungle. A one-for-one skirmish is next up after Cryin was able to get his revenge on Humanoid. MAD then sprung a trap in the bot side of the map, with Humanoid picking up yet another kill for himself as MAD moved to 1k ahead. Shortly after, there was another big kill for MAD as the EU squad continued to pick up kills. Then, of course, another kill in a bot lane 3v3 but RNG managed to trade one back.

It was one of our most active early games of MSI 2021. As the clock ticked 12-minutes, the kills were 4-8 for MAD, with MAD picking up the first tower and first drake, as they moved to 3k ahead. Now in the early-mid game, there was another massive fight in the MAD jungle. RNG engaged the fight but Armut just did far too much damage as he and MAD took down two members of RNG and moved towards the Baron. MAD left Baron on the map and instead opted for another 5v5, though somehow no one died. So MAD simply moved to the third Drake.

Baron was up on the map and MAD took the opportunity to take it down and Ace RNG when they showed up to contest. With all members down and Armut in the base, MAD looked to take down the RNG inhibitors. After resetting, MAD made one last push into the RNG base, where they cut down all of RNG’s champions and ultimately their Nexus. With that win, MAD secured the final spot in the Knockout Stage. 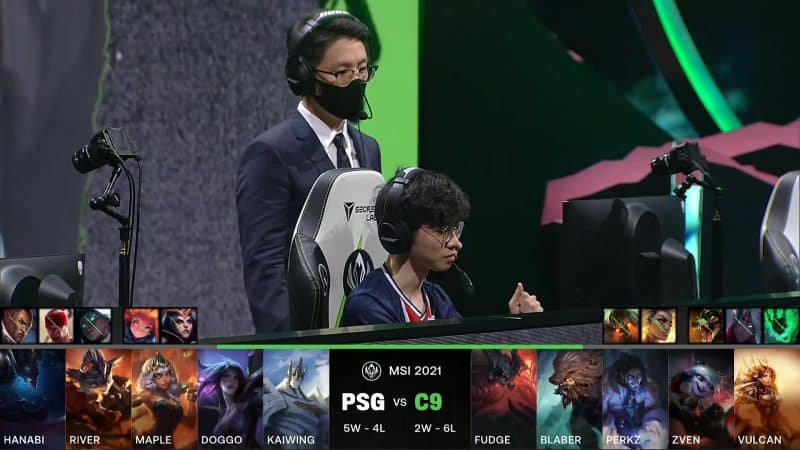 While the result meant nothing to C9 anyway, as MAD already secured the final Knockout spot, losing First Blood inside four minutes probably wasn’t in the C9 playbook. But C9 fought back, ironically it comes from a good scuttle fight on the part of C9, as they picked up two kills. That good work is slightly undone after Doggo is able to win a 2v1 under his own tower.

While the game calms down by the 15th minute, the action always seemed like it was just a flash play away from kicking off. The inevtiable 5v5 kicked off in the PSG jungle and it’s a messy two-for-three in favor of C9 as they built up a small gold lead. With Baron spawning, another 5v5 started up but this time it’s PSG that came away ahead. Two members of C9 fell early. Chasing them out of the river, PSG took down another but Baron remained.

A 5v5 again broke out in the river, and it was messy but despite C9 getting close, they ended up losing three-for-two as PSG rushed down the Baron. It was quiet on the Rift for the duration of the Baron, but with the next one spawning, it all kicked off. PSG was able to take it, but the follow-up fight went C9’s way, to begin with, taking down two members of PSG. While the final two members of C9 held firm, they got Aced as PSG moved onto the Nexus towers.

PSG grouped up with Baron falling off and charged into the C9 base. Despite their best efforts, C9 just couldn’t do anything to stop them as they bowed out of MSI with a whimper. 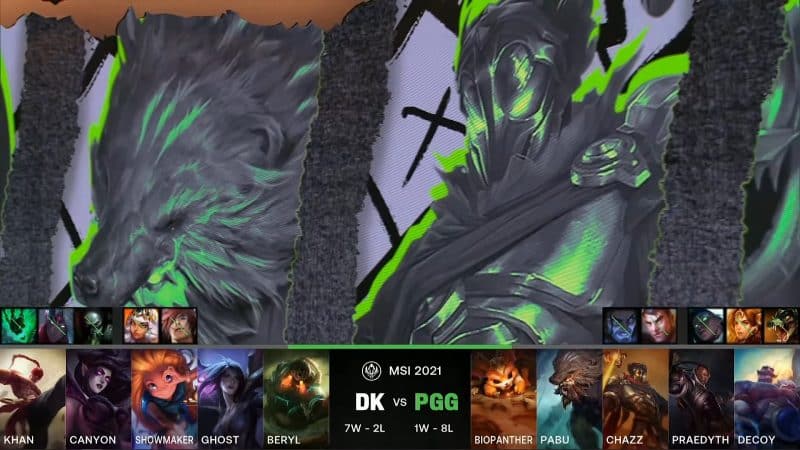 In a match that didn’t have any meaning either, PGG was able to get First Blood, though DK was quickly able to get one back. That early 1v1 was all the fighting we got in the first 12 minutes, though DK’s Rift Herald saw them claim first tower and a 2k lead. They then moved around the map to take more and more. With most of the outer towers down, DK’s strength started to get out of control as they looked to turn the screw on PGG.

PGG looked lost, with DK aiming to end the Rumble Stage 8-2, PGG looked unable to counter what DK was bringing to the game. As a result, DK continued to grow their lead to 6k as they were able to pick off members of PGG indiscriminately all over the Rift. With Baron up, PGG tried to find picks but DK had way too much power. DK picked up the Baron buff as they began their siege of the PGG base.

DK pushed into the base via the bottom lane and PGG did their best but simply couldn’t stop the rampage. With another easy win, DK moved to 8-2 as PGG head home with just one victory. 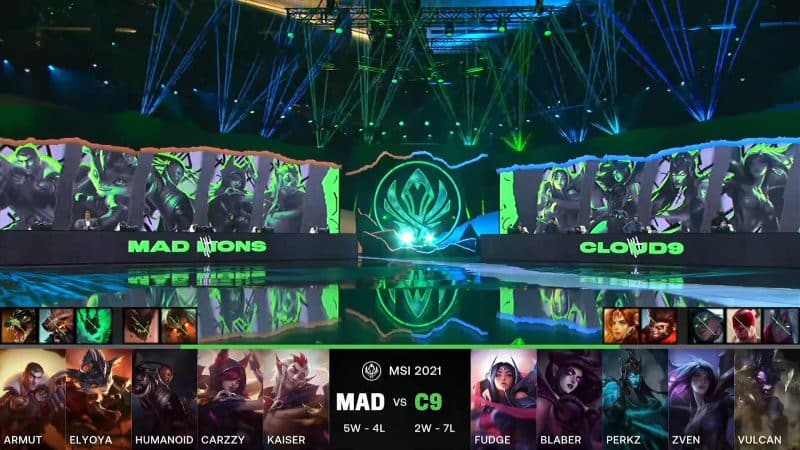 Though there weren’t any tournament stakes on the line, the NA vs EU rivalry games are always for pride. And it was MAD who made the first move, picking up First Blood in a top lane 2v1. While the game meant very little for either side, the early game at least showed we’d be in for a match as MAD picked up a quick second kill. C9 bounced back with two kills of their own after MAD tried to pull off a few limit-testing duels and failed.

The back-and-forth continued with C9 being at a two-kill advantage by 13-minutes, though MAD had a slight 2k lead. It looked like C9 was starting to get back into the match, until they suddenly weren’t. MAD picked up some big kills around the Baron pit as they cemented their lead. C9 remained in the lead on kills and the game was still close at the 23rd minute with both teams clearly itching to fight. We got our Baron fight and it went the way of C9 as they finally showed up in the match. With four MAD members down, C9 claimed the Baron as they moved into the gold lead.

C9 had the damage and it appeared like they had the game too. They won a 5v5 team fight four-for-zero as they crashed into the MAD base. C9 took down the first Nexus tower but had to retreat hastily when MAD respawned and forced a reset. C9 managed to knock down the MAD base at the second time of asking as C9 at least heads home having a 1-1 record against EU.