Everything you need to know about Yone, the Unforgotten.

Following in Yasuo’s footsteps, Yone slashed and dashed into the game last year and instantly became one of the game’s biggest champions. Releasing with the Spirit Blossom event, Yone entered the game with significant lore implications and potential. Plus, he’s another high-skill cap champion with flashy mechanics, outplay potential and awesome character design. Because of all of this, many players have decided to learn to play him, meaning there are even more people needing to learn how to play against him. Whether you’re an aspiring Yone player, want to smash his face in in-game or simply find him a cool character, there are more than enough reasons to learn more about Yone!

Yone was a long-awaited champion release in the LoL universe. He’s the half-brother of Yasuo and hails from the land of Ionia. However, despite being Yasuo’s brother, he had quite a different personality. While Yasuo is reckless and hard-headed, Yone is patient and disciplined, and overall the one his people respected. But still, the two brothers were very close, and though Yone had to encourage Yasuo with an act of humility to do so, they both trained under a master of wind technique, Elder Souma.

The two both had somewhat different fighting styles but excelled and were incredibly gifted. Yone mastered sword technique, while Yasuo bettered him in wind technique. Their excellence was important, as eventually Noxus marched into Ionia and war broke out. As the more responsible brother, Yone went to the front lines, whereas Yasuo was tasked with protected Elder Souma. Yasuo resented his duties, and during the course of his assignment, Elder Souma was found dead, killed by his own wind technique. When Yone rushed back home, he was devastated as he learned his brother Yasuo fled immediately after Souma’s death.

Yasuo was on the run, an outlaw and a murderer in the eyes of many, including Yone. Because of this assumed betrayal, Yone hunted his own brother down with all intentions of bringing him to justice, whatever the cost. A duel broke out between the two, their blades flashing in a one-on-one deathmatch.

In the end, it was Yasuo who prevailed with his superior wind technique.

From death, to life

Somehow, death was not the end of Yone. No, it was a new, dark beginning. Angered by his failure to stop his murderous brother, he attracted an evil spirit in the realm of spirits, where he passed on to. Filled with spite, he barely had time to block the strike of a malevolent demon, called an azakana, who lunged forward to slice into him. But he did manage to block the attack and he once again was flung into a duel. And like before, his swordsmanship was unmatched but was losing to the demon’s magical prowess.

It was a close fight, but fueled by his anger, Yone forced the demon’s blade away and cut him down with his own sword. After that, he heard the azakana’s hideous laughter once more before he found himself in the material realm, whence he originated.

However, he was not as he was before his death. The face of the azakana he slew affixed itself to him in the form of a mask. Through it, he could see other azakana and malevolent spirits that wandered the material plane. With it, he learned how to combat the demons, and while he was burdened by his past and defeated to Yasuo, he set out to destroy any azakana he finds in the hopes of learning more about the azakana that remains to haunt him.

And through his travels, he does at some point reunite with Yasuo briefly. This encounter, as well as the entire brothers’ backstory, was marvelously laid out in the “Kin of the Stained Blade” cinematic Riot Games produced alongside Yone’s release. It’s definitely worth the watch. 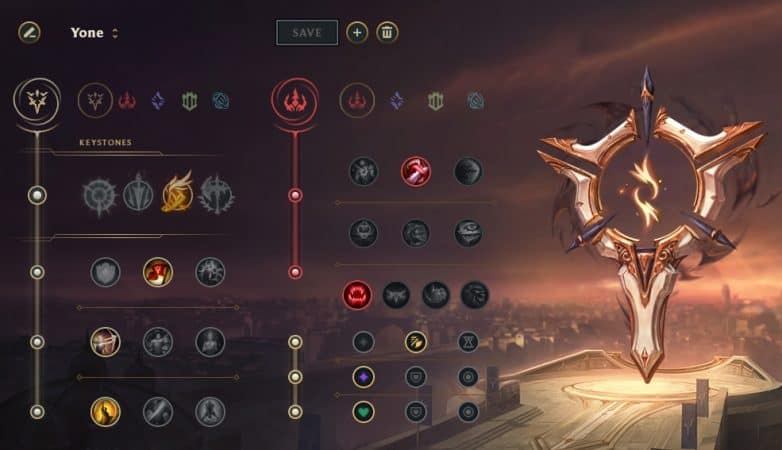 Yone thrives in extended fights and has great consistent melee damage. But as a melee champion, sometimes he needs a bit extra sustain in lane to survive tough matchups As such, his keystone rune goes a long way in providing him with what he needs to thrive.

Fleet Footwork is the ideal option in situations where you expect to be bullied in the early game. In the mid lane especially, there are a ton of ranged champions, so staying healthy against them is crucial. Fleet’s healing, paired with the other healing runes and his item build, gives him more potency in the early game, which in turn helps him gain the gold he needs for his coveted two-item power spike.

Conqueror, on the other hand, is for most melee matchups and generally scales better. The stacking damage and healing in long fights is nothing to be trifled with and makes Yone that much harder to duel on a side lane. Honestly, this is the rune that Yone wants to take, while Fleet Footwork is a rune that he has to take in certain situations. So if you’re confident in the matchup, go Conqueror. If not, Fleet Footwork is the way to go.

Other than keystone, everything else should typically be the same, always. They synergize with him and his playstyle well and are simply optimal. However, some may decide that Resolve secondary is useful in some particularly difficult matchups, so maybe keep that in mind. 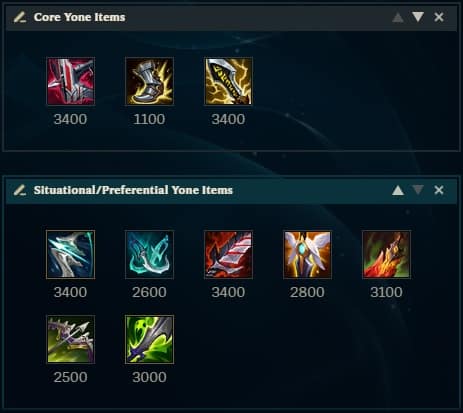 If you’re familiar with playing Yasuo, the itemization for Yone will feel very similar. His first three items are almost always the same, due to how effective they are for him. Berserker’s Greaves is the ultimate first item, as it gives him an early power spike he can abuse in lane. After that, building Immortal Shieldbow is the norm, since it gives him Critical Strike and healing, with the shield that can turn fights in his favor. Infinity Edge is next on the menu because with it Yone can reach 100% Crit chance, plus it has the Crit damage amplification.

While this is the average, and usually ideal, build path, some players choose to go for Galeforce with something like a Phantom Dancer, Bloodthirster, or Infinity Edge afterward. It gives another cheeky dash and more mobility to an already mobile champion. While it’s an option, new Yone players should stick with the Shieldbow and IE build.

After the first two main items and boots, you can go in a lot of different directions. It all depends on what you need to deal with the enemy champions. Guardian Angel gives you a revive, with Death’s Dance giving more sustain for long fights. Quicksilver Sash/ Mercurial Scimitar is necessary for getting out of heavy CC, which is important against many teams comps in later stages of the game. Finally, Executioner’s Calling/ Mortal Reminder cut down enemy healing, useful in dueling and team fights alike. 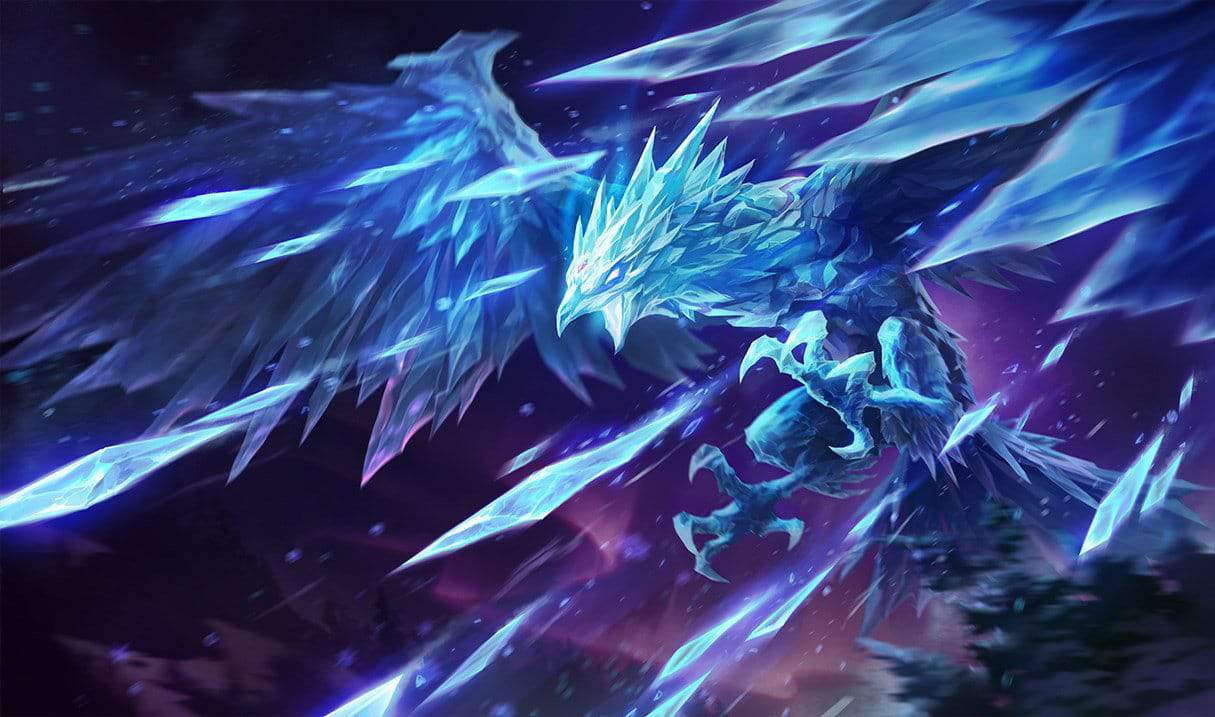 While Yone can be incredibly strong in many situations, there is definitely a good deal of champions that give him a hard time. Essentially, they’re split into two categories in the mid lane: control mages with easy-to-hit CC and assassins with high burst potential and mobility.

First off, the control mages. Anivia shines the brightest here, due to her wall that can stop Yone’s advance and fast wave clear. Others that counter Yone are Lux, Malzahar and Lissandra. All have different ways to CC him, which is when he becomes most vulnerable, and safe and effective wave clear. Without his ultimate, Yone pretty much just has to run at people in his Soul Unbound (E), so champions that can sit outside of his Mortal Steel (Q) dash range and CC him when he goes into his soul form are reliable counters.

However, assassin types champions tend to be even better. Yone thrives in drawn-out fights where he can stack Conqueror and the true damage portion of his E, so assassins who can one-shot him do quite well. Plus, these kinds of champions usually have decent mobility, so that helps to dodge out of Yone’s dash and ultimate. Zed, Katarina, Wukong, Nocturne, Jayce and Ahri are six of the top performers in this category.

Though he’s played far less in the top lane, it’s relevant to name some counters in that position too. Honestly, most of the meta top laners perform well into him, which is why he’s not played there as much. A few of the worst matchups for Yone here are Riven, Shen, Urgot, Ornn, Sett, Jax, Kled and Sion. 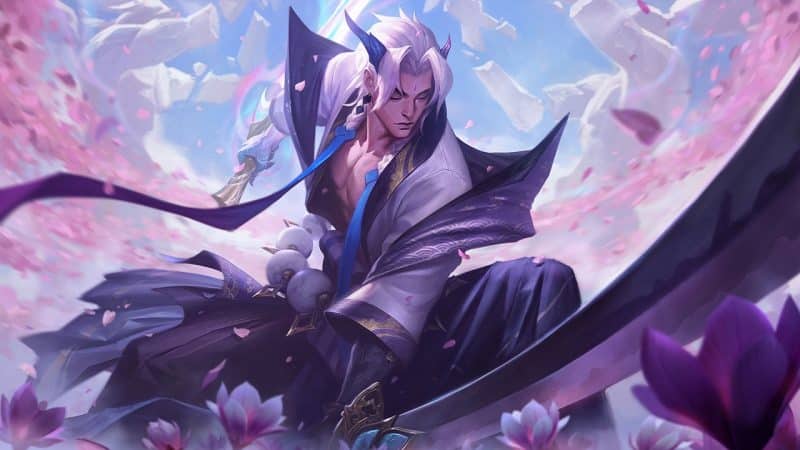 Still being a rather new LoL champion, Yone doesn’t have too many skins. Thankfully though, he’s incredibly popular and a champ that Riot will probably give a skin to every year at least. If you want some variety from his dark, edgy default theme, the futuristic, anime-like Battle Academia Yone skin may be up your alley. Besides that, the pictured-above Spirit Blossom Yone is an exquisite take on a Japanese warrior from fable. But if neither of these tickle your fancy, or you simply want a bit more variety, don’t worry! It’s safe to expect more cosmetics in the not-so-distant future.