Welcome to the world of Babylon’s Fall

Greetings, Sentinels! Clem here from the Babylon’s Fall community team. It’s been a while since we showed the game, so I hope you enjoyed the new trailer we just revealed at E3!

If you haven’t seen it yet – we’ve got you covered!

Launching on PS5 and PS4, Babylon’s Fall is an online co-op action RPG set in a high fantasy world that lets you fight powerful enemies and bosses while exploring the mysterious Tower of Babylon.  Create your character, defeat gigantic foes, collect loot, and craft equipment to customize your own build and play style!

The good news: you’ll be able to team up with friends and fight as a party of up to four Sentinels! The even better news: you will do so in absolute style.

That’s right, Babylon’s Fall follows in the steps of the previous PlatinumGames masterpiece NieR: Automata and will let you fight your way through the tower with elegant, frantic, and absolutely devastating non-stop action. Before we dive into some specifics, let’s take a moment to talk about the Gideon Coffin – a key item not only for the story but the gameplay too. 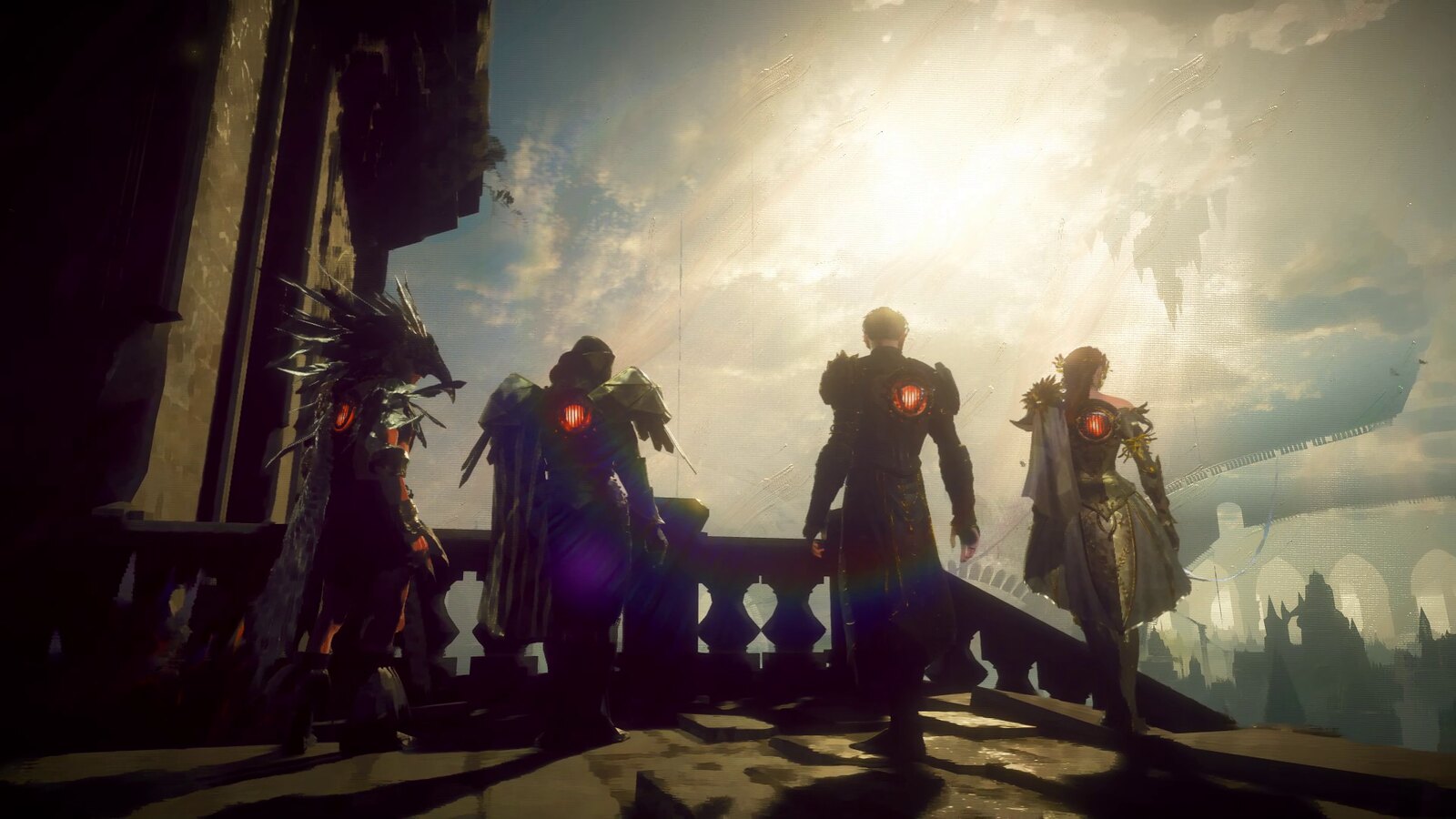 Four Sentinels with Gideon Coffins on their back.

This mysterious device implanted in the back of your character will allow you to use the Gideon Gut, a series of spectral tendrils that burst out of the Gideon Coffin enabling a range of different abilities. Not gonna lie, the best of these powers is certainly the Gideon Arms. While you can normally wield two weapons – one per hand – the Gideon Arms let you equip two more! Yup, you read that correctly: you can wield four weapons at all times! Pretty mad, especially when you can mix and match weapons to your liking. 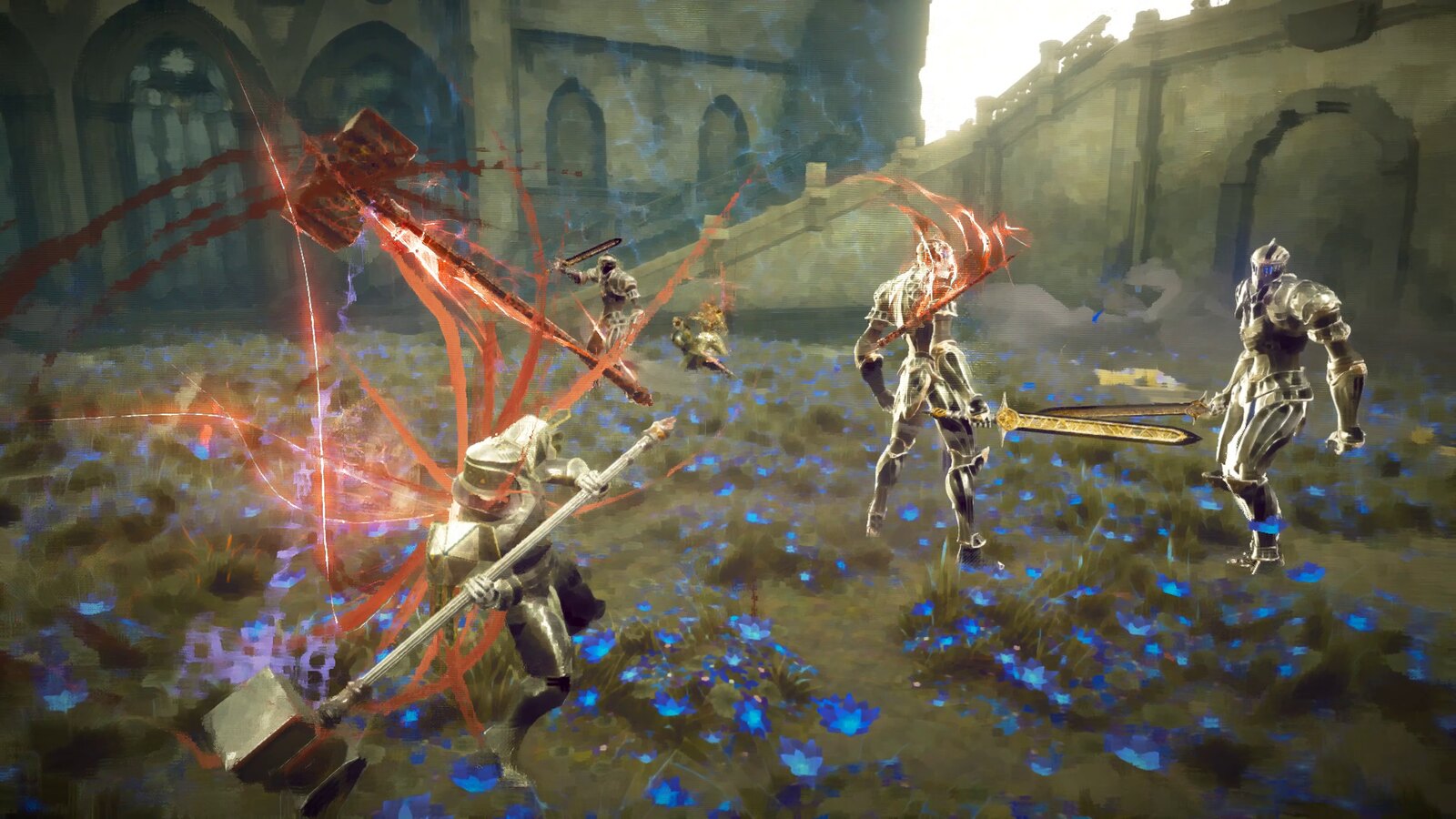 A sword and a hammer equipped as Gideon Arms.

When the game releases, five types of weapons will be available: swords, hammers, bows, staffs, and shields. These will allow for a great deal of loadout customization, for you to build your ideal Sentinel!

Do you like close combat and heavy weapons? Equip two hammers and two shields! Want to be a balanced fighter with two swords, a bow, and a shield? Go for it. You’re more the careful sorcerer type? Three staffs and a shield, you got it. You really, really, really like bows? Use four bows! Why not – it’s your build after all! 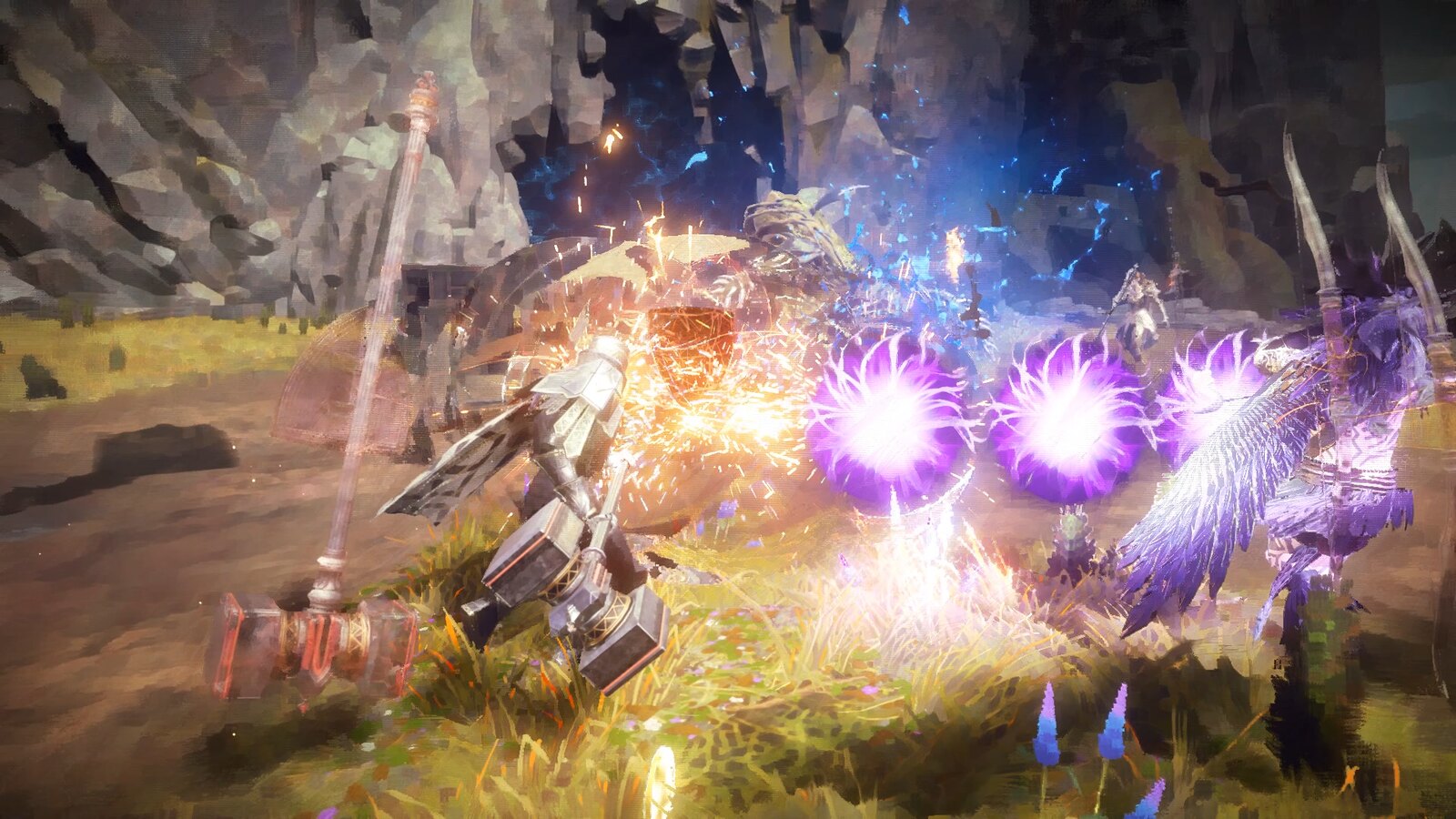 A balanced combination of shield and hammer.

With that in mind you can give yourself totally renewed gameplay experiences simply by trying out different builds! What if… we all equipped four hammers and power through the tower, ha ha… joke… Unless? 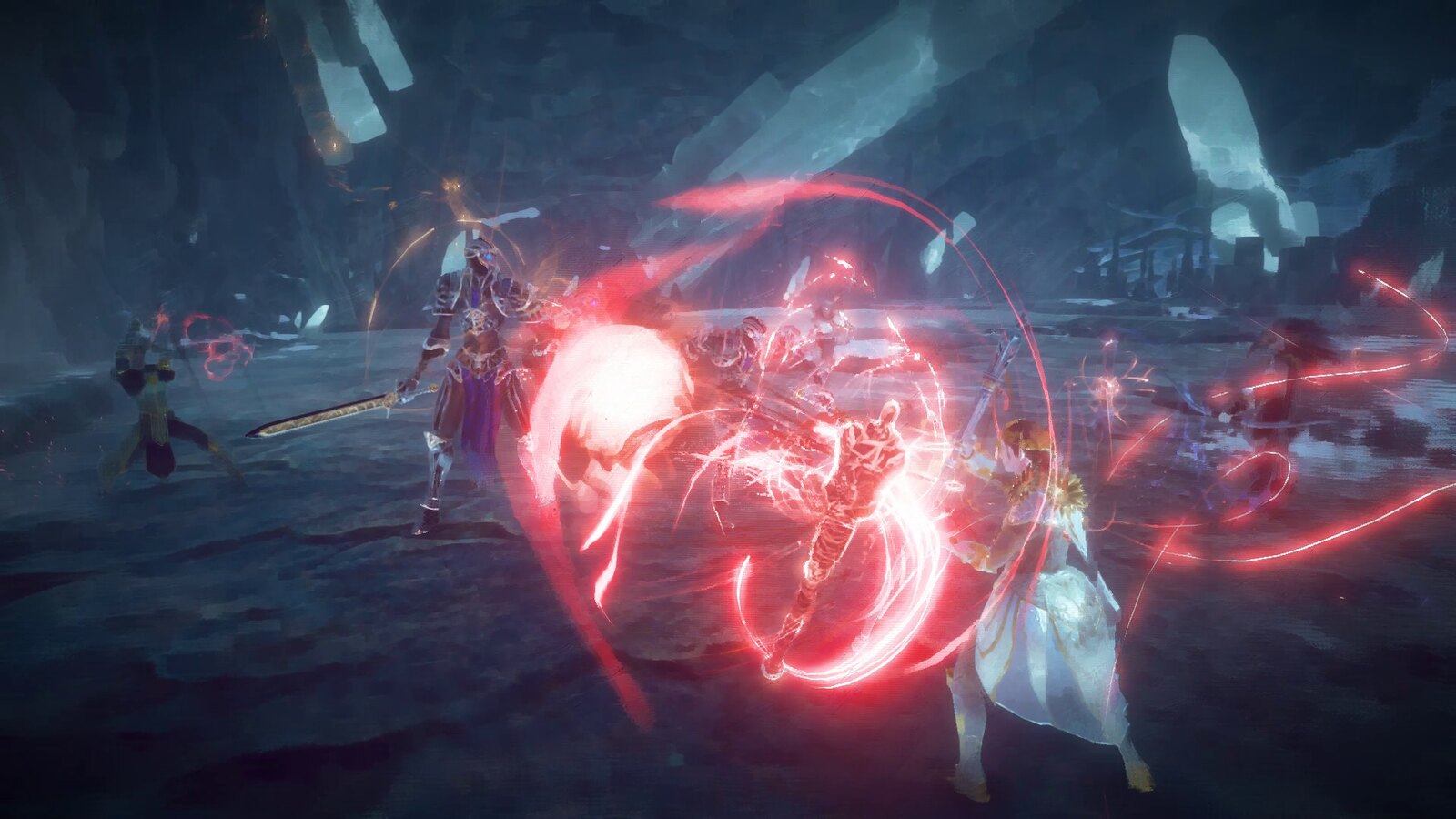 Depending on what weapons are mounted on your Gideon Coffin, different combos and actions will be available, which will in turn activate unique skills – and that’s when PlatinumGames’ mastery of fast-paced, stylish action comes into play.

For instance, dodging an enemy’s attack at the last moment will allow you to sneak in your own counterstrike. You can patiently wait to bait the enemy, then evade and counter it like a boss while your friends are getting ready to unleash their attacks as soon as the enemy is knocked out. Or, if you’re more of an acrobatics enthusiast, you can launch the enemy in the air with your sword so that your friend who really likes bows can shower them with deadly arrows like there’s no tomorrow. 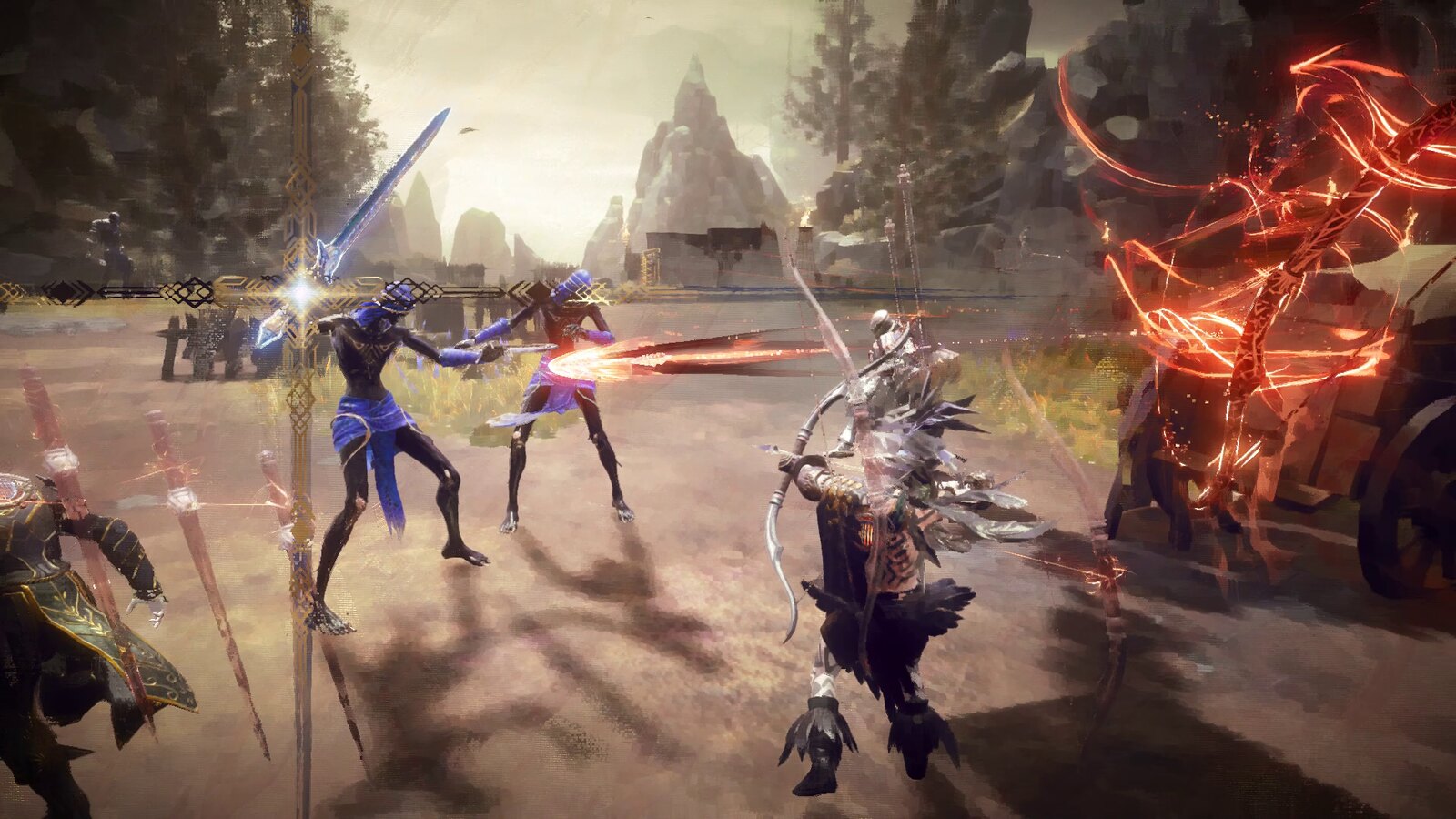 That one friend who really, really likes bows.

If you missed the show at E3, it also featured a special Developer Interview that gave an inside look at the teams and their vision behind Babylon’s Fall.

We have plenty more of Babylon’s Fall to show you later this year–sorry to make you wait a little longer! See you soon in the tower, Sentinels!