How To Eliminate Trespassers In Fortnite Season 7

Fortnite Chapter 2 – Season 7 week five is underway with plenty of new challenges for players to accomplish. We recently covered the CB Radio challenge, so be sure to check that out. Epic Games had more in store as week five continues. One quest tasks players with eliminating Trespassers — the new aggressive alien characters introduced in Season 7. Today, ESTNN provides a rundown and guide on completing this week-five challenge and earning 30K experience points (XP).

Where to Find Trespassers

The easiest way to find Trespassers begins when you enter the Battle Bus. Once onboard, open your map and look for any locations with purple lettering, which indicates that Trespassers are flying overhead. The map above highlights Believer Beach, Boney Burbs and Steamy Stacks in purple. These points of interest are your best jumping-off point. Trespassers typically spawn in threes, and all NPCs pilot Flying Saucers. Now that you know where to find Trespassers, let’s break down how you can quickly eliminate them.

How to Eliminate Trespassers 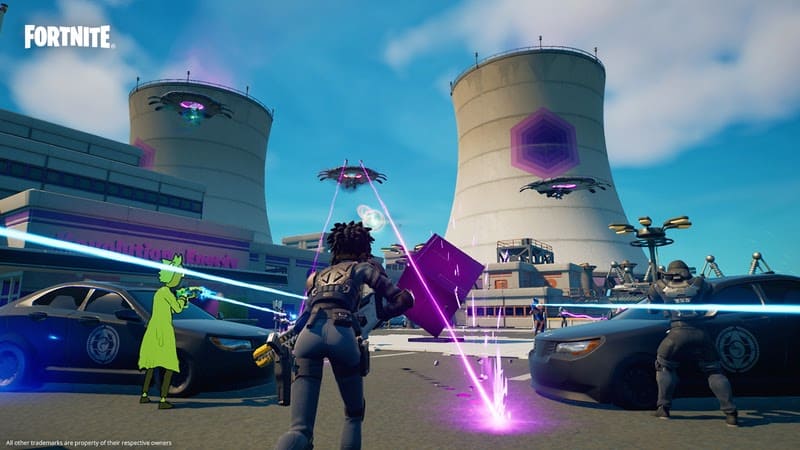 After touching the ground, you’ll need to find a weapon, preferably a long-range Assault Rifle. The next step is to turn your attention to the sky and fire upon one of the Flying Saucers. After inflicting enough damage, the vehicle will crash, causing the Trespasser to exit the UFO. That is your chance to attack and eliminate the extraterrestrial being. Repeat that process a second time, and that completes the week five “Eliminate Trespassers” quest.

It’s crucial to avoid heavily-populated POIs like Lazy Lake since many other players will land there, which could ruin your plans. You may want to focus on a less-populated location or one that is far off the Battle Bus path. That will give you ample time to find a weapon and complete the challenge with little resistance.

That covers this week five Fortnite Battle Royale challenge. Be sure to capitalize on these opportunities to progress through your Season 7 Battle Pass!

The post How To Eliminate Trespassers In Fortnite Season 7 appeared first on Esports News Network | ESTNN.