Only one can advance to meet Team Liquid in the Semifinals, who will it be?

The 2021 LCS Championship Grand Final weekend is off to a roaring start with Cloud9 (“C9”) and 100 Thieves (“100T”) taking to Summoner’s Rift in the Semifinals. These teams have fought tooth and nail through their opposition thus far and are so close to a potential LCS title. Though Team Liquid will be a formidable foe for either team, they had their minds fully on this match first. All eyes were on top performers like Closer and Zven to carry their teams to the Finals. But in the end, it’s always a team game, and the better team came out on top today!

With two different compositions with opposite win conditions, Game One set the pace for an exciting series. The opening few minutes were fairly quiet, with the first play happening on the top side, as 100T took Rift Herald and used it for the First Tower bonus top. In response, Cloud9 claimed the Cloud Dragon and sprung a trap soon after, where they piled onto Huhi, killing him for First Blood. Funnily enough, a minute later 100T did the same thing to the C9 support, catching and killing Vulcan.

Moving into the mid game, it was all about picks. It started off with Abbedagge blowing Zven’s Flash mid. In response to that, C9 ganked the ultimate-less Orianna in the bottom lane, killing her before 100T could defend. But 100T struck back in another way. Abbedagge Flashed on the Flashless Zven to kill him in the mid lane. The pendulum swung back, as C9 ganked Abbedagge again and tower dove him for the kill. Shortly after that, C9 caught out Closer and had the 4v5 advantage, so they rushed over to Baron at 22 minutes.

However, it wasn’t what they wanted. As a team fight broke out, C9 clumped up and a beautiful Aphelios Infernum from FBI eviscerated multiple C9 members, leading to 100T securing four kills and the Baron. With this Baron, 100T managed to knock down the bot Inhibitor but C9 held the line. But a disastrous team fight at 27 minutes led to a three-for-one team fight win for 100T, which allowed them to take all three Inhibitors. All 100T needed from here was one uncontested Baron and a prolonged siege to finish off C9 and take the first game of the series. 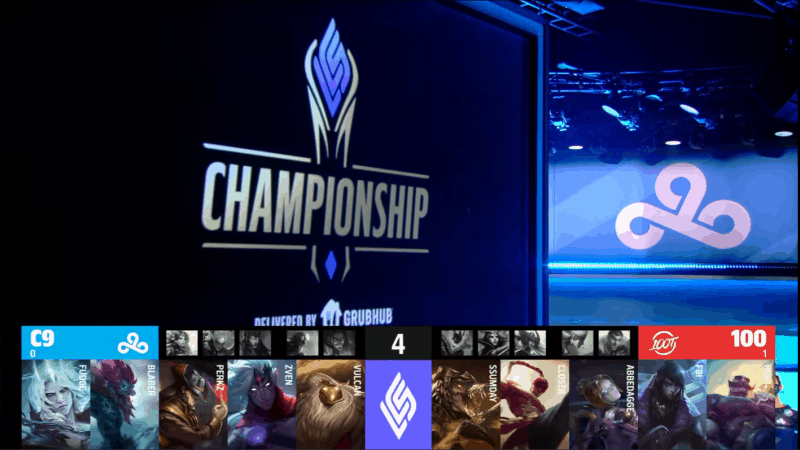 Another back-and-forth grind of a Game Two for both teams as they opt in for the same strategies as in Game One. It all started off fantastically for Cloud9, as Blaber and Vulcan ganked Abbedagge to kill him for First Blood. Then, a three-man unit from C9 moved top to slay Ssumday’s Renekton too. To top it off, C9 won a crucial skirmish in the mid lane to pull ahead with three more kills. Its important to note though that 100T had strong objective control, with a Herald and two dragons, meaning they weren’t out of it yet.

At 22 minutes, C9 pulled even further ahead by outplaying a team fight to secure three more kills and an Ocean Dragon of their own. Five minutes later, C9 had a second one. With this, C9 was in a good spot, but then Perkz made two huge mistakes. First, he was caught out and killed trying to flank in 100T’s jungle. Then, he was killed again when he was positioned too far forward in a mid lane team fight. After this second death, C9 secured the third Ocean Dragon but had to watch 100T pick up the Baron.

Back and forth and back again

100T appeared to be in the driver’s seat now, but C9 threw a sucker punch when 100T sieged the bottom lane. Here, C9 pulled off a miracle fight to Ace 100T while only losing one of their own. With C9 now on the offensive, Zven’s poke on lethality Varus was oppressive, and it helped them to get a one-for-one trade and a Baron buff of their own at 40 minutes.

Using their side lane threats, C9 made some headway with structure destruction during the Baron. But then Closer made a miracle play in the mid lane, Lee Sin kicking Zven into the 100T squad for a swift execution. Seeing their opportunity, 100T rushed towards the Elder Dragon and claimed that objective. Relying on Zven’s accurate arrows, C9 was somehow able to keep 100T at arm’s length and defend their base. For a while anyway. At 48 minutes, 100T won a team fight mid and pushed forward. It became a bloody brawl in C9’s base, but thanks to another fantastic play from Closer, 100T routed C9 and blasted their second Nexus.

Down 0-2 in the series, C9 had to show something new or be forced to make an early exit. On the other hand, 100T’s 5v5 drafting style was working wonders with coach Reapered at the helm, who was surely looking forward to a potential 3-0 sweep of his former organization. 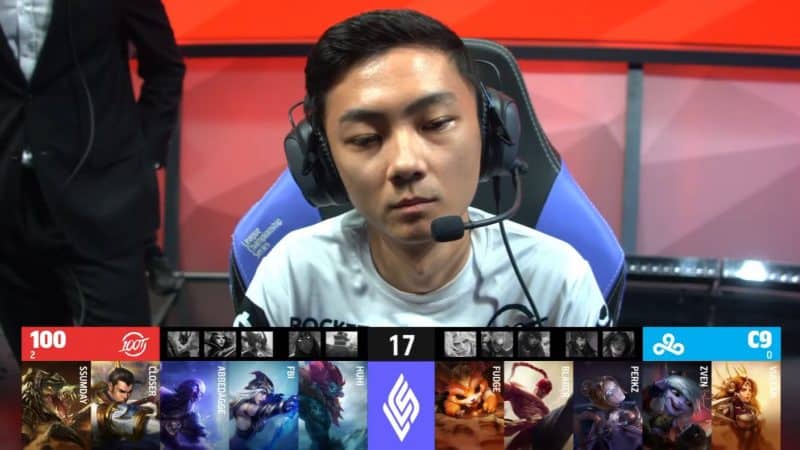 In a potential series-finishing game, the train went off the rails. The opening minutes of Game Three were an absolute bloodbath. It started at level one in the bottom lane 2v2, where the duos fought and C9 secured the first two kills. At almost the same time, 100T tried to three-man dive top, but C9 collapsed and punished them, picking up another kill. Then, pretty much as soon as FBI returned to lane, the C9 duo killed him again, but 100T ended up getting one back. Pan back to top lane and 100T dove and killed Blaber this time. By the time the clock ticked seven minutes, there were 14 kills altogether, seven to each side.

The game did slow down from its breakneck speed but was still fast. 100T moved mid to kill Perkz at eight minutes, then punished an overeager dive from C9 in the bot lane to go two-for-one in kills. In addition, 100T claimed Rift Herald and the First Tower bonus. At 14 minutes, a one-for-one kill trade happened, then a tower trade with C9 coming slightly ahead with a Herald on top. All the while, C9 was accumulating dragon, and after a pick onto Huhi, grabbed the third one at 19 minutes.

C9 was finally online, and though 100T did strike back with a pick onto Fudge and a kill on the back end of the play, their time in Game Three was nearing its end. At 24 minutes, C9 perfectly played a mid lane team fight, with Zven hard carrying on his fed Tristana. They took the Ocean Soul right after this and a Baron not too long later. With both buffs, C9 pushed top, where another team fight saw three 100T champions dead, and with renewed vigor, C9 pushing through straight to the Nexus to make this a real series. 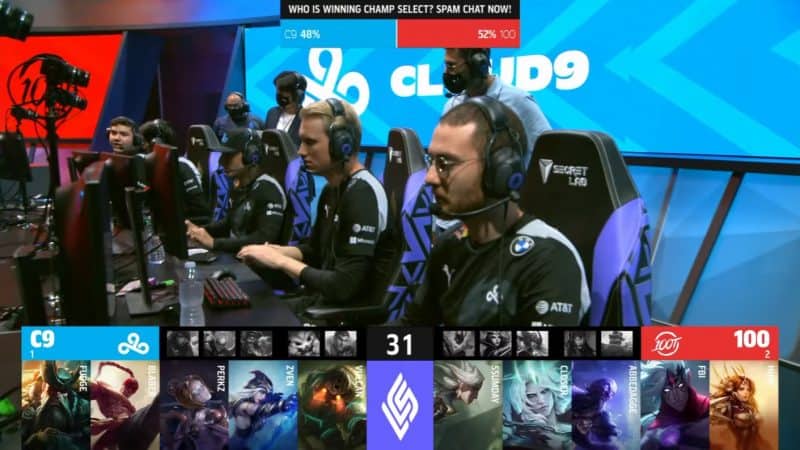 Now that C9 finally had some wind in their sails, it was time to go. After the insanity of Game Three, the teams seemed to agree it was too much and dial back for Game Four. The first thing slain was Cloud Dragon at six minutes by Cloud9, then 100T took Rift Herald at eight. During their rotation to the Herald though, 100T made a pit stop mid to kill Perkz for First Blood. A minute later, C9 made a top lane dive, but it was a bit messy and only a one-for-one. All the while, FBI was smashing the bottom lane, and after a Herald got some damage off, FBI took all the First Tower bonus for himself, putting him incredibly far ahead in gold.

A decisive moment in the match was at 15 minutes. Here, 100T secured the second Herald and a pick on Vulcan to boot. With the kill, 100T forced a dive top where a full blown team fight erupted, with 100T coming out ahead three-for-one in kills. This put 100T very far ahead, and by 17 minutes, their gold lead was over 5k. But they were overconfident for a moment, as after they found two picks, they went for Baron, which they were forced off of, but tried to force a fight anyway in which they simply gave over two free kills.

That was okay though, as at 25 minutes, 100T managed to kill off Blaber in a team fight and easily secure the Baron. To their credit, C9 pushed 100T away from the siege once and protect their base. As a result, the game stalled for a few minutes. Finally, the game shattered open when a team fight broke out at 33 minutes. In it, 100T showed their team fighting proficiency by killing all of C9 without losing a single member of their own.

Immediately, they ran down the mid lane and busted C9’s final Nexus to claim victory in the series. Now, for the first time since 2018, 100T will make their way to the Finals to take on Team Liquid.