The LCS Mid-Season Showdown returns this week as the Losers Bracket begins! Second-seeded TSM takes on sixth-seeded Evil Geniuses, who comes out on top?

The Mid-Season Showdown sees TSM take on Evil Geniuses in the first round of the losers bracket. This is a closer series than many would have predicted given the level of experience on the side of EG.

This was the definition of ‘not even close’ as TSM ran away with this game in an under thirty-minute win. Despite some early kills for EG, TSM was able to counter everything Evil Geniuses threw at them. With an even footing in the game, Evil Geniuses over-forced a team fight at the 14-minute mark, losing multiple members and the second dragon of the game. The game was all but confirmed to be over at the 18:20 mark as TSM won a 3-0 fight that saw them also take down the infernal dragon. At the 22:20 mark, EG made a last-ditch attempt onto Spica, and while they were able to kill the TSM jungler, TSM was quick to the punch and ended up winning the fight.TSM was able to secure the Infernal Soul, the Baron and push for the win. While EG had solid aggressive plays, TSM was in a position to counter them and would punish every single play EG would make. Evil Geniuses managed to one-up their opponents with an even more dominant display in Game Two. Once again the Ignite/Teleport Camille was punished, as at 2:47, Svenskeren on Lillia immediately pathed topside for the first blood. The game started to swing heavily in Evil Geniuses’ favor around the ten-minute mark, as they were able to turn around a TSM play to pick up a double kill. A minute later, EG again countered a play from TSM in the bottom lane, where EG once again picked up two kills.

By the time the game reached the 19-minute mark, TSM’s base was almost exposed, as the tier-three tower in the mid lane was missing 75% of its health. By this point, EG was out of sight and out of mind with just below a 6k gold lead. A fight erupts at the 23:00 mark, which sealed TSM’s fate, as EG was able to pick up the Baron. The nail in the coffin was at 24:30 when Deftly was able to secure a quadra kill on Tristana. EG pushed for the win and ended the game quickly. 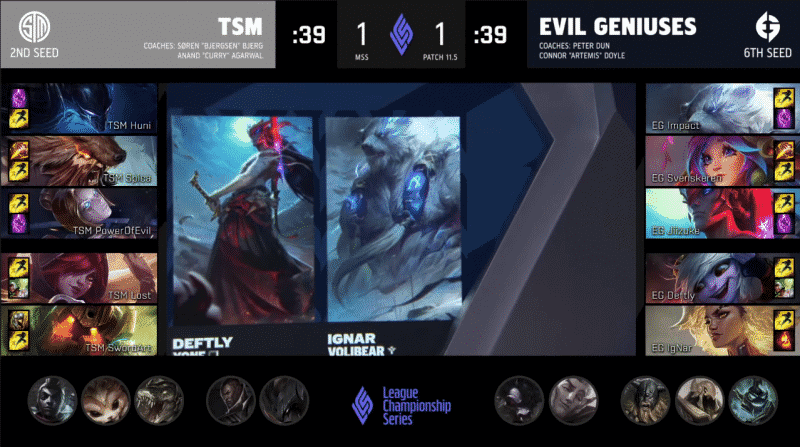 Evil Geniuses fans should look away after this game. This had a victory written all over it for EG but it was in fact TSM who walked away with the win. Evil Geniuses started out this game the same way they started Game Two, securing kills left right and center as they raced out to an early 5-1 kill lead by nine minutes. Where EG started to falter as they have done in so many mind-games was at 14:18 where an overextension in TSM’s top side river saw Jiizuke shutdown. Trade kills followed until 22:20 when TSM was able to find the perfect engagement onto Deftly to kill him. Jiizuke tried to re-engage but this resulted in Lost picking up a Quadra Kill.

TSM was able to secure the Baron off of this fight and the game swung in their favor. At 27:13 EG went for a last-ditch fight just outside of their base, though it was not enough, as TSM were too far ahead at this point and went up 2-1 in the series. Game Four was back and forth, but in the end, TSM pulled out the win. It all started with a 2v2 in the top lane, where TSM stormed off to a lead with two kills. However, EG did make some good moves. SwordArt had an unnecessary death in the mid lane to Jiizuke, then EG won a team fight three-for-one in kills near the Rift Herald. For the next 10 minutes, there were a few skirmishes, but both teams went relatively even in kills.

That was until 25 minutes. Here, a mid lane team fight saw EG go up two kills. They went to Baron afterward, but Spica stole it away from them with a well-timed Smite. EG did take two kills as revenge though. From this point, the game seemed even again, but that proved to be untrue at 32 minutes. It was at this time that TSM claimed their third dragon and forced a team fight, which led to five kills and the Baron. After that, EG couldn’t withstand the pressure. They tried to mount a desperate defense but four EG champs were slain, giving TSM free reign to charge the base and claim EG’s final Nexus.