It’s time for the LEC Summer Split Grand Finals. Despite a rocky season for both, Fnatic and G2 find themselves going head-to-head again.

It probably wasn’t the predicted Final on the final weekend of the regular split, yet here we are. Fnatic (“G2”) and G2 Esports (“G2”) are both at seven LEC titles apiece, and the winner of this series is moving on to eight and becomes the undisputed champion of EU. Will we see G2 continue its dominance of Europe by picking up their eighth title or will FNC be able to re-assert their claim to the EU title? Below is our full recap of the LEC Summer Split Final between FNC and G2.

G2 secured the win to begin with, though made it look difficult, even from a position of comfort. First Blood goes to FNC as Selfmade moves bot side and Rekkles is able to pick up an easy early kill. G2 took us into the mid-game with a 2k lead as Jankos, on Shen, is able to nullify everything FNC is trying to do in the jungle. While FNC is able to make plays as a group, individual mistakes by Nemesis cost them.

With the game hitting the 20th minute, G2 continued to snowball the lead as Caps began to get fed. With a 4k lead already at this point, G2 looked to make a statement early on in the series. Baron was up, so G2 closed their fist on FNC. It looked all but over at this stage with G2 rocking an 8k lead. As G2 pushes the FNC base, FNC is able to get some big kills, picking up kills in both bot and top lane. Unfortunately for them, they’re always traded back one-for-one as FNC continued to just try and survive.

FNC finally found their fight as G2 caught Hylissang but out he just refused to die. While he does drop, FNC does so much damage on the backside that they win a four-for-one trade and claim the Baron. G2 trade back upon respawning by getting Soul point and picking up a two-for-one. G2 picked up Baron and charged the base as they tried to end. FNC yet again pulled off another miracle defense as they lose one but claim three G2 members in return.

As G2 pick up Elder Drake, FNC catches out Caps yet again. As he drops and Shen tries to save him, he also drops. With Selfmade getting caught out in the jungle, he hands the game back to G2 and they claim Game One. G2 takes a big Game Two as they come from behind to beat FNC and aim to 3-0. First Blood goes to G2 as FNC makes a mistake in bot lane, which they’re unable to recover from due to the lack of Heal. A much closer Game Two sees gold slightly FNC sided, though G2 picks up Rift Herald. The first drake also goes over to G2 as the gold lead evened out as we moved into the mid-game.

FNC then pulled the trigger on a fight in the top lane. The drawn-out fight sees FNC pick up two kills as G2 is unable to do anything in reply. As the drake spawns, Selfmade is able to steal it, however, G2 puts down the damage as they take down four members of FNC and they move top side to take the Baron as the gold lead levels off. FNC forced the 5v5 and they clean house. G2 just cannot handle the damage after Perkz is caught out. FNC take an Inhibitor and then move to claim the Soul.

With Baron in play, FNC continued to try and end but kept getting caught out as the game simply refused to finish. Nemesis is caught out this time as he gives over the Elder buff to G2 and they look to end. G2 is able to do it yet again, while Hylissang tries to base trade he’s unable to do it as G2 goes 2-0. 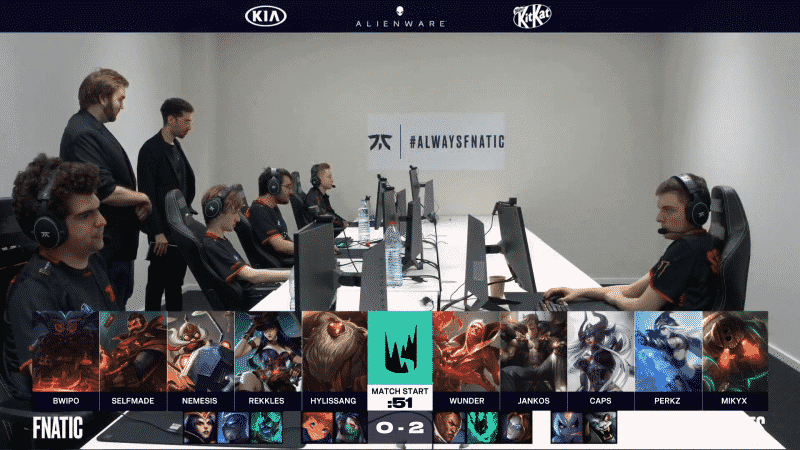 G2 is able to secure the 3-0 as, despite a near collapse in Game One, they’re able to claim their eighth LEC title. First Blood goes to G2 as they catch out Nemesis in the mid lane. FNC counter-collapses and picks up a kill in return. The gold remains fairly close, with G2 taking a slight lead having used the Rift Herald in the mid lane.

We get the first mid-game fight at 16 minutes as Rekkles gets a kill but his team loses two in reply. As Nemesis joins the fight they even out the kills. The following fight sees G2 claim a free drake and two kills, as FNC falls. G2 forces yet another fight, where Nemesis is able to pick up two massive kills but Rekkles can’t get involved. As a result, FNC can’t put down enough damage and they lose three members.

With the fight at Infernal Soul, G2 pulls the trigger and collapses on FNC. While they lose two, they take three in the main fight. As they secure Soul, they’re able to take down Rekkles and Ace FNC. They secured the Baron afterward and continued to assert dominance across the FNC lanes, taking down the top and mid inhibitors as they moved bot lane for a potential end. FNC fight back once more with a deep TP behind enemy lines. Nemesis is able to secure big kills on the G2 backline as FNC claims three kills and loses only Nemesis in return.

With FNC looking to take the Elder Drake to try and win the match, Caps TPs into the FNC base alongside Wunder and they take down the FNC Nexus and claim a huge confidence-boosting 3-0 victory.