The battle of the Kings of Europe comes to Round 2 of the LEC.

It’s always going to happen in the LEC. Fnatic (“FNC”) and G2 Esports (“G2”) will always end up meeting in the finals, and in Summer Split this could be just the first time they meet. With the winner heading to the Grand Finals and the loser heading to the Semi-Finals, the rivalry is what’s really at stake. With both sides having already locked in a spot at Worlds.

FNC starts off the series with a big win, as they dominate the mid-game. First blood goes to G2, with FNC pushing in their lane, Wunder is able to TP behind them a claim first blood for himself. FNC instantly finds a time to reply with two kills of their own. They catch out the G2 bot lane as Nemesis and Selfmade join the fight as the G2 bot lane falls. FNC is able to follow it up with a pick onto Wunder as they drop Rift Herald bot Lane and take a 1k lead at the 12th-minute mark.

FNC is able to stretch the lead to 4k by the 22nd minute. With them looking to slow the game down as early Baron prep happens. 1 minute later FNC finds the fight. With Bwipo securing the Drake, FNC makes a play behind Baron and is able to win an extended 4v5 after they picked off Jankos early. They ace G2 and lose no-one in return as they secure the Baron and move up to an 8k lead.

G2 makes the push to try and hail merry the win, while they get the first kill FNC is able to eventually win out in the play. Perkz is able to drop Nemesis which stops G2 from losing the game. FNC picks up the next Baron and slowly drop the G2 squad as they claim an emphatic victory in game 1. 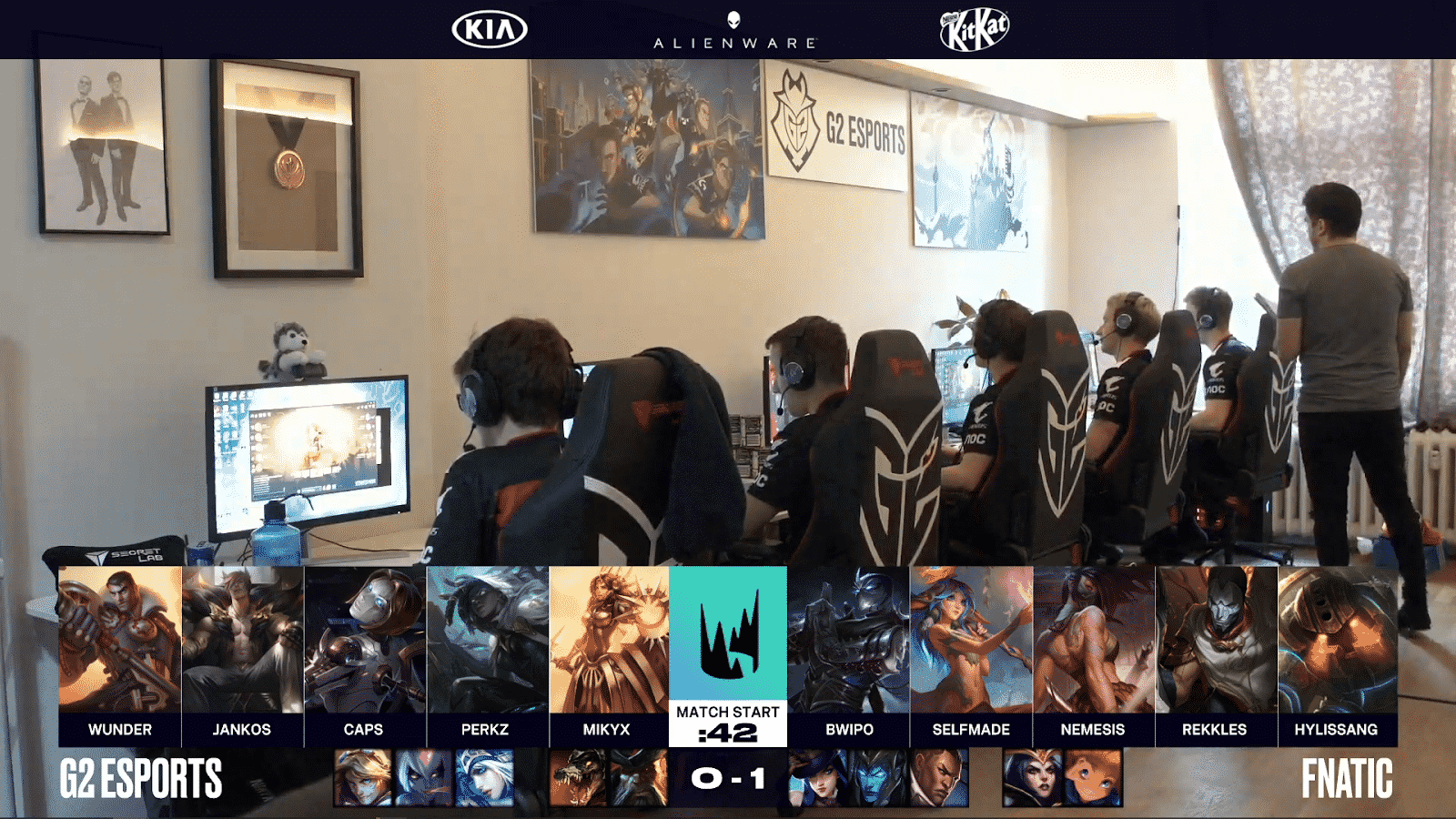 First blood goes to FNC, with Selfmade ganking top, while they fail in the initial dive they pick up the kill onto Bwipo’s Shen in the extended fight. With 14 minutes on the clock, G2 started to look to claim a hold on the series. While a fight goes their way in bot Lane and they secure the Drake, they do lose two in reply and in turn, see FNC reclaim the gold lead.

The back and forth continued as this G2 finally make a play that works out. They drop Rift Herald mid lane and catch FNC sleeping as they swing the gold lead back to an even position. With the Soul up on the map, G2 began to pressure it and Hylissang is caught out again as Bwipo moves to bot Lane. Nemesis goes in too early and drops fast. G2 pick up 3 kills, take the soul then moved to claim Baron.

G2 push for the win at the 29th minute. With Baron buff on them, they push the base, ace FNC and take the series to 1-1. 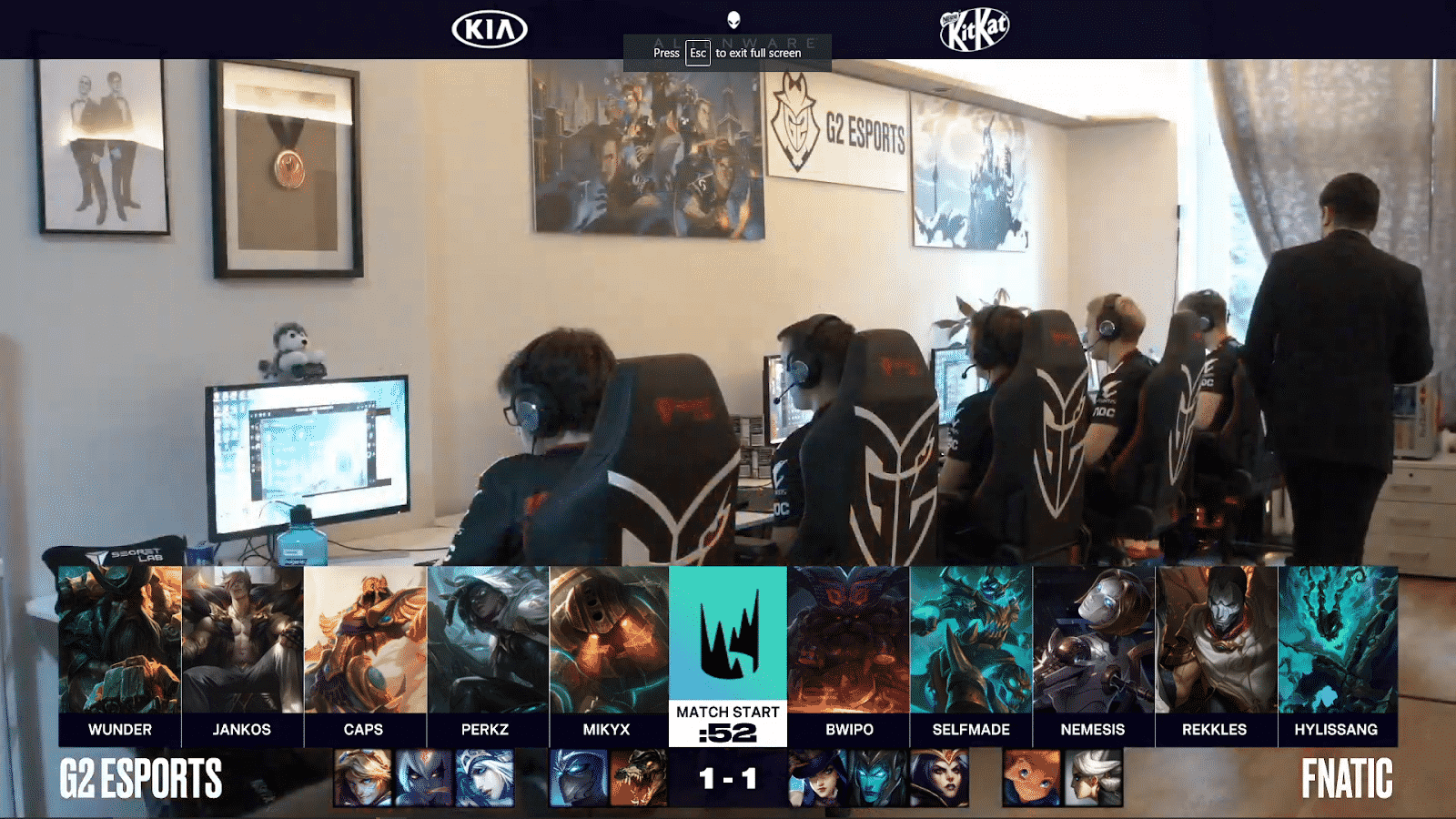 FNC makes a statement in game 2, after losing the early game they pounce on a G2 misplay and take the series to 2-1. First blood goes to FNC again with Selfmade repeating his earlier gank to get an easy kill for Bwipo. G2 sees the “waterfall” effect in full effect. They claim a kill in mid lane then 4 man dive Bwipo and claim a first tower and all five plates.

By 16 minutes, G2 started to close their fist on the game. They chase FNC into the jungle and some amazing work from Caps helps G2 secure another three kills and move onto soul point and a 3k lead. G2 use Rift Herald and push open the FNC base. Meanwhile, FNC kills off Perkz as their base is opened up. G2 overextend and FNC aces them in the base.

FNC used the time to push Baron, they claim the buff just as G2 members rejoin the fight. FNC, however, is able to claim the fight victory killing off three more G2 members as FNC finds themselves flipping a 4k deficit into a 3k lead. They picked up the second drake off the back of another misplay by G2. They then used the buff to push in the lanes and claim a massive second game in the series and put themselves onto match-point. 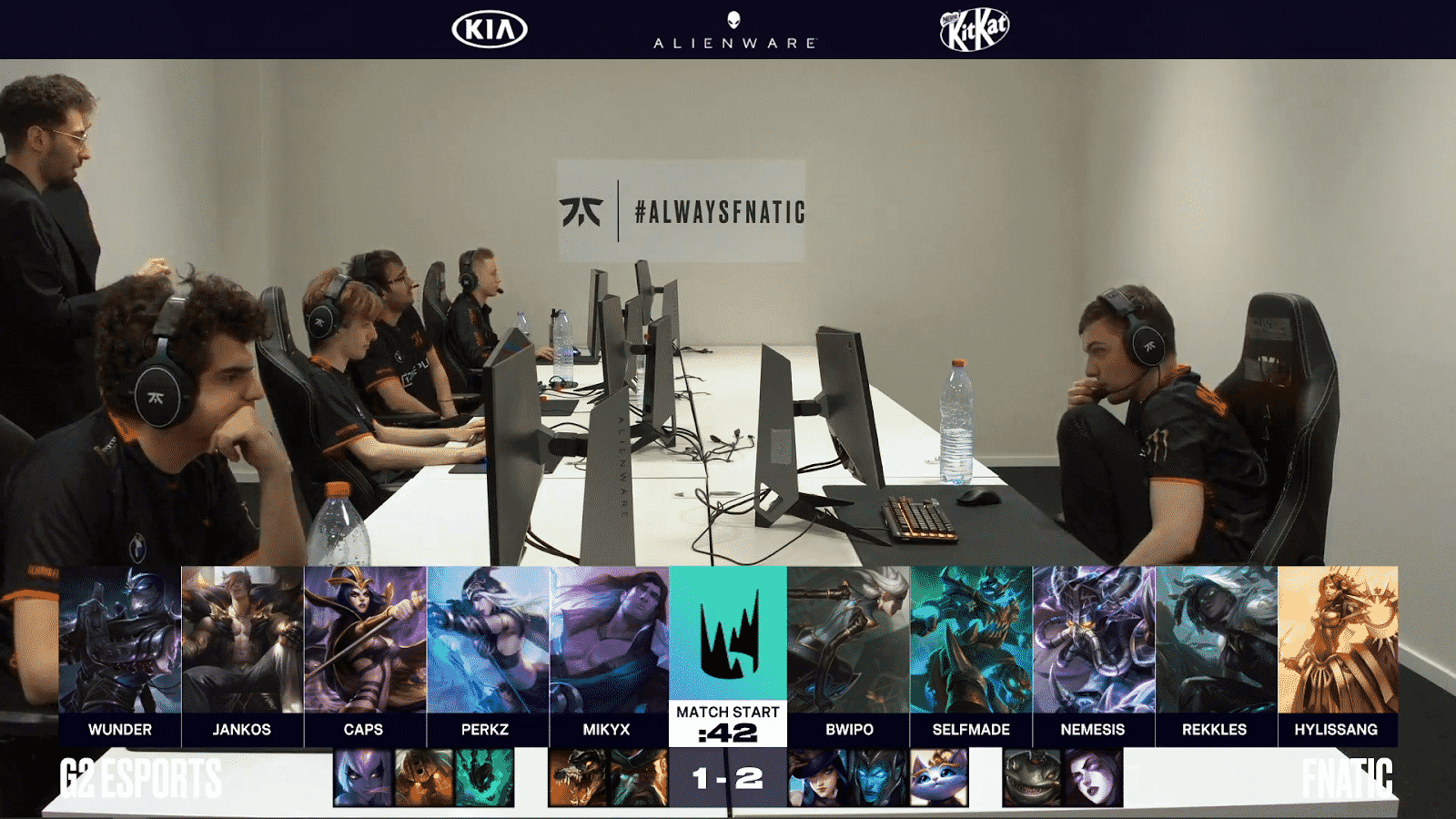 G2 takes the game to the fifth game with a clean win against FNC. First blood goes to FNC as Bwipo and Jankos get into a 1v1 and the FNC top laner is the one who comes out on top. In what was a very top focused early game, G2 takes an early lead but the game remains on a knifes edge.

G2 continued to keep on the pressure in the game. With the match hitting the 20th minute G2 had a near 5k lead while Bwipo was still yet to complete a full item. FNC makes things worse for themselves as they throw away two more kills to G2 as they begin to look at closing out the game. G2 move onto the Baron uncontested as try to close out the game.

With the Baron buff, G2 pushed into the base and claim three Fnatic players’ lives. After the throw in game three, G2 take a clean victory as the series heads into game five. 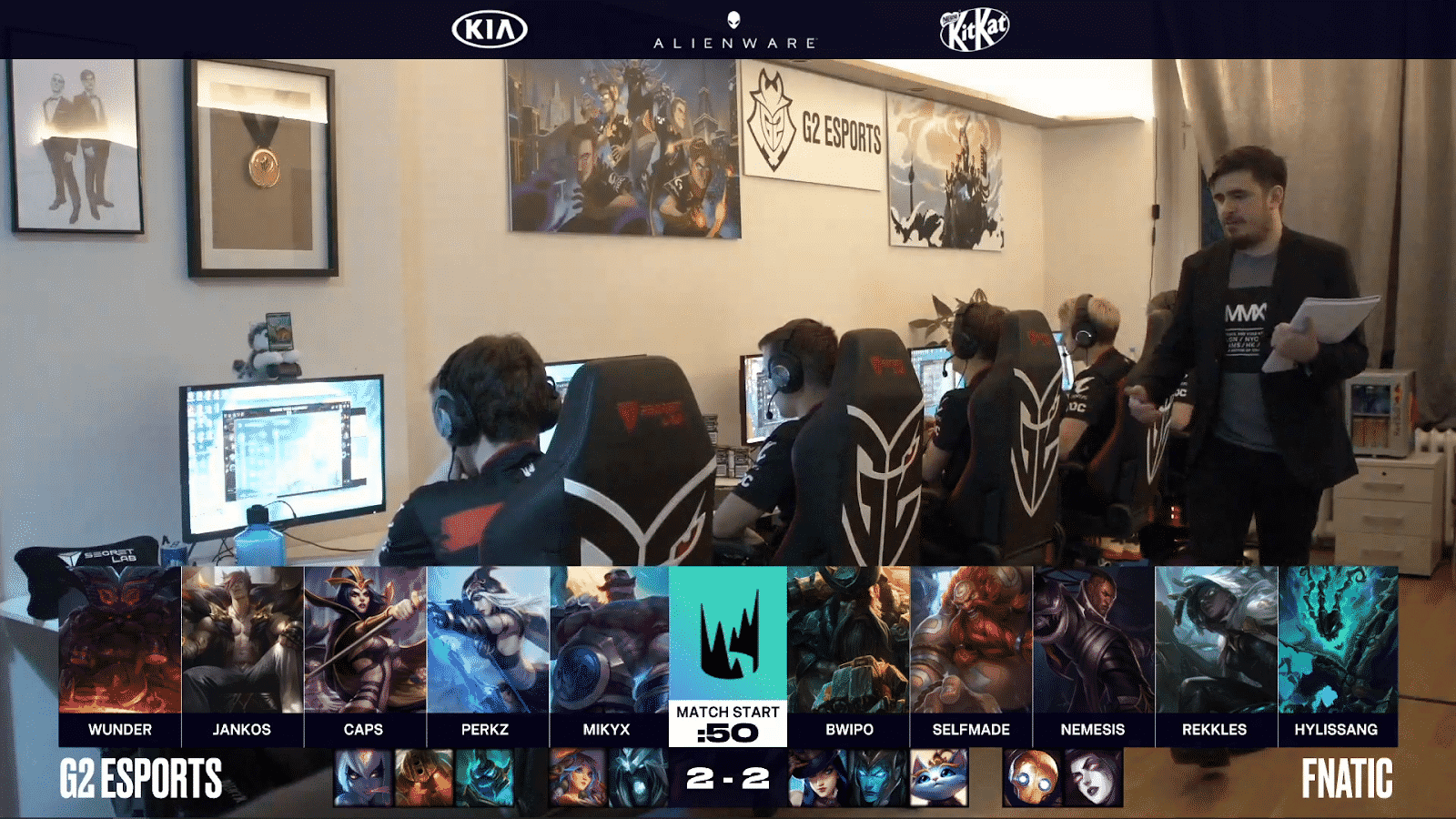 FNC is able to take the series in a base race as they beat G2 in a best of 5 for the first time since 2018. First blood goes to G2 as Jankos moved mid to punish Nemesis who had already burnt his flash in a prior fight. Gold lead remains close to even as G2 force a gank on bot side. Some fancy feet from Selfmade and a quality hook from Hylissang means it’s FNC that gets the kill and the Drake.

The 17th-minute mark saw a drawn-out fight break out in FNC jungle. While FNC is caught out at the start, they turn the initial fight and claim a kill. G2 chase down and secure two of their own, however smart play from Rekkles sees FNC trade back agile the gold lead stays even. The following fight again starts with a G2 engage but its FNC again who comes out slightly ahead. With Baron about to spawn the game is completely even.

The fight breaks out over the drake. G2 grabs the drake but the fight is split up and FNC gets the picks. Selfmade makes a huge pick and FNC collapse to get the ace. With FNC pushing the base Jankos is able to delay the FNC win but with members recalling Caps tries to stop them but gets deleted in the process.

FNC reset and claim the Baron as they try to end the series by sieging the mid lane. G2 managed to get a huge pick in mid lane and take out two members of FNC as the game continues. Another crazy fight sees G2 take down 3 for 1 as they try to push to win. Caps tried to 1v1 Nemesis in the top jungle but he can’t do it as FNC gets the soul. Perkz tries to back door but Nemesis is able to defend as FNC claims victory and moves them into the Grand Finals.