Game two of the LEC Playoffs gets underway as G2 took on MAD Lions.

In a repeat of the 2020 Spring Split First Round series, G2 Esports (G2) faced off against MAD Lions (MAD), with the winner set to secure a spot at Worlds. Below is our full recap of the series. You can catch our recap of SK v Schalke 04 here.

G2 gets off to the perfect start to the series, picking up an impressive game 1 victory. They picked up first blood in the mid lane, Jankos barreled into the mid lane and he picks up an easy kill with the help of Caps. G2 continued to pile on the pressure. By 9 minutes G2 had won their third fight, as they gained a nearly 4k gold lead. G2 kept up the lead, moving onto soul drake point with little resistance from MAD.

The big mid-game fight happened and MAD found a chance back into the game. The extended fight saw Shadow pick up three major shutdowns as the gold flew back to MAD. G2 managed to pick up two kills in return as they maintain the gold lead with soul spawning. The following fight at soul drake sees Perkz get one-shot but it all fell apart as they dropped four members for only two in return. G2 picked up a clean 23-minute soul.

G2 took down the first inhib after a fight breaks out in bot lane. It quickly goes from a 1v2 to a 5v5 as MAD won early, with Perkz hanging back he’s able to clean up. The final fight breaks out and it was just like the last. Mad win early but Micky, Perkz and Caps are too much to handle. G2 secure game 1 in a comfortable fashion.

G2 make it 2-0 despite a valiant late-game fight back from MAD. MAD managed to pick up the first blood, though it’s misplayed by Shadow who just picks up the kill before falling to the tower. Minutes later the next big fight sees everyone head mid with Micky starting out the fight as G2 pick up the first kill as it quickly becomes a 4v4 and G2 take the gold lead.

The blow-for-blow continued into the 13th minute, with both sides continuing to fight and trade kills. Though G2 was able to pick up both early drakes. With four drakes down and the gold evening up MAD looked to make the play. MAD grab two kills in the top lane and move down to secure the Baron which G2 don’t contest.

MAD was unable to make anything of the Baron as Caps continues to show up when it matters. Shutting down MAD and keeping the base secure. G2 pick up soul and head to Baron, it took some time but G2 is able to clean up on the next fight and secure game 2.

The MAD Lions give us a series, as they win game 3 and take us to a fourth game. First blood goes to G2 again as Shad0w fails to kill Caps as Jankos aids Caps to pick up first blood. G2 continued to force ganks bottom, but Lulu proved to be too much to handle as MAD fight off two back to back ganks. MAD go into the 12th minute with a 2k lead and looking in a much better position than the previous games. 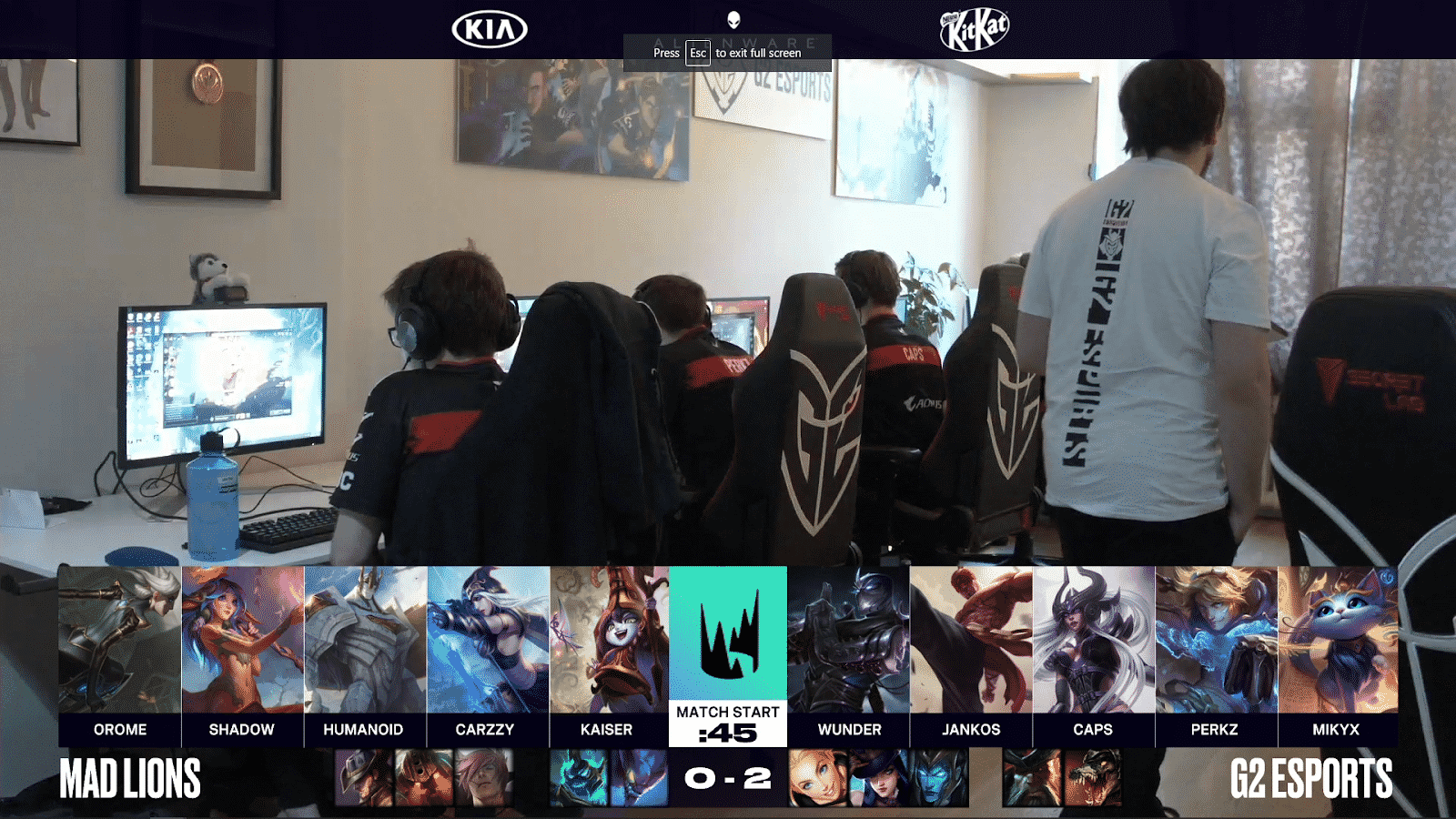 MAD looked to be turning the screws as we move deep into the 20th minute. While game 3 was slower than the first 2, MAD slowly tightened their grip on the game as they claimed the first three drakes and a 5k lead. With the fourth drake spawning, the game felt in the balance.

MAD make the play. They aced G2, claim the soul and pick up a Baron. MAD played the end game slowly, taking down inhibitors while taking out G2 members as they closed out the series and giving us a game four.

G2 is able to claim game 4, after a big lead early they pick up victory out of nowhere to claim a spot at Worlds. First blood goes to G2 as Kaiser is unable to escape the G2 bot lane as Braum walks him down. G2 was able to build upon their lead into the 13th minute, with 4-1 on kills and a 3k hold lead things looked good in the early game for the LEC’s reigning champions. 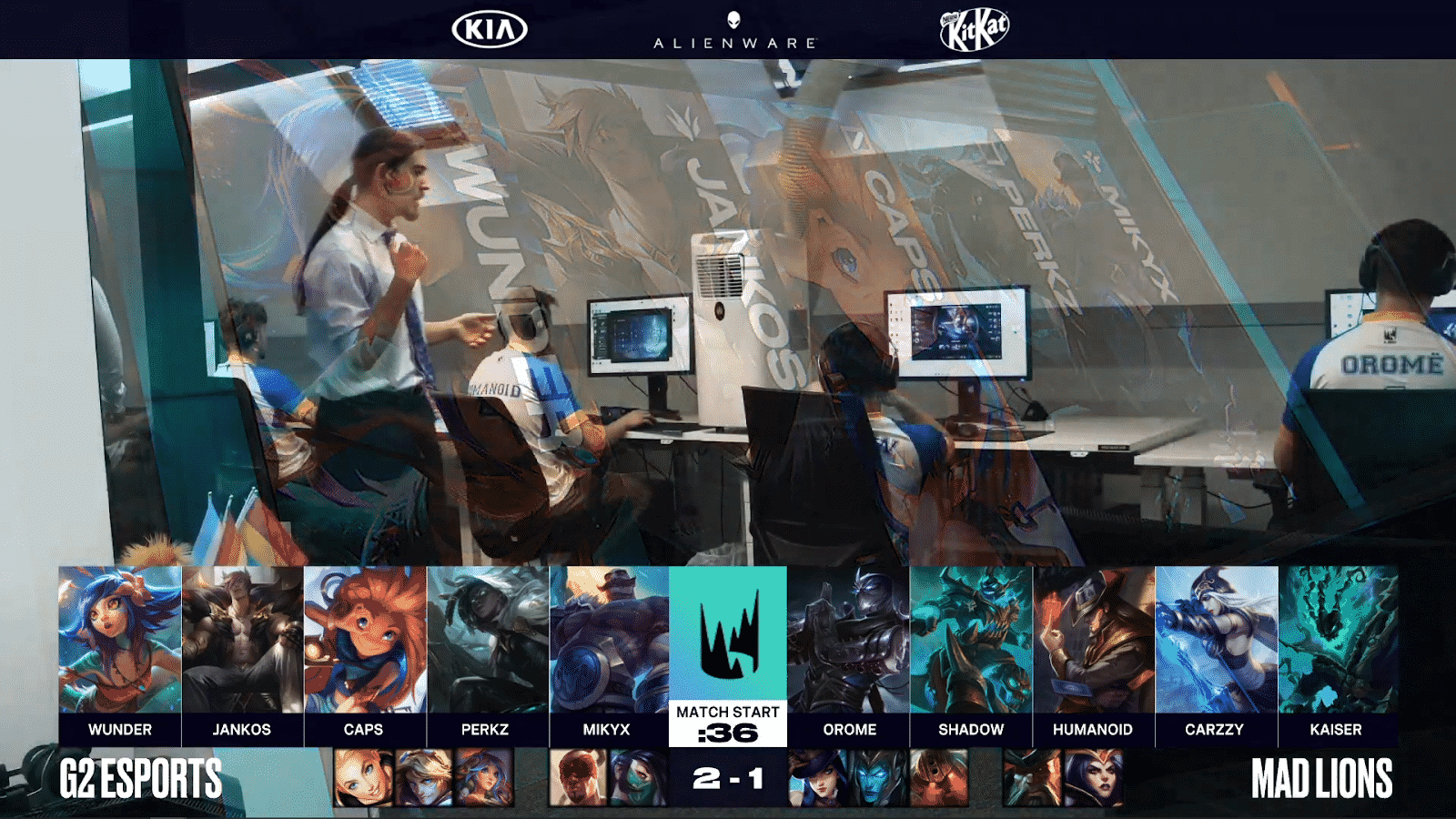 MAD just refused to give up! A fight starts in the mid lane as MAD punish the poor positioning of Caps to claim a 3-0 in kills and pick up their second drake of the game. With the lead in G2’s hands at this point, however, MAD still trail…

And that’s all she wrote. Out of seemingly nowhere G2 pull the trigger and destroy MAD and their base along with it. With that, G2 secure a place at worlds, as MAD move into the lower bracket.