The LEC Summer Split Grand Finals weekend is finally here, and it starts with a Semi-Final cracker.

With a spot at Worlds secured for both teams, the match is all about a place in Sunday’s Grand Final series against Fnatic. Can G2 Esports (“G2”) bounce back from their 3-2 defeat to Fnatic in the Upper Bracket Final? Will Rogue (“RGE”) continue the dominance we saw against MAD Lions and sweep aside G2? Below is our full match report from this epic clash.

RGE pick up the first game and give themselves a huge confidence boost for the rest of the series. First Blood goes over to RGE, as Inspired picks up a flawless gank top side, even making Wunder burn his flash. Ganks were aplenty in Game One, with the top lane being the popular hangout spot. At 10 minutes RGE held a 1k lead as the early game goes their way. At the 16th minute, RGE continued to grow their lead, which stood at over 3k at this point, with their second Rift Herald yet to drop.

G2 are able to make their first big play and it came as a counter to an RGE play. As RGE makes a play top side, G2 is able to flip it and chase down two members. In the process, the lead closes to just 2k, with RGE still in the lead. The very next play, however, saw RGE retaliate. They pick a stun on Caps and collapse on him. That kill opened up G2 and allowed RGE to Ace them under their mid-tower. RGE uses the free time to secure Baron as they re-secure their gold lead.

RGE made the play to secure Soul point. G2 are able to steal it away but lose two members in return as RGE easily secure their second Baron. G2 tried to set up a brush gank but it completely fails. Braum is able to block so much damage as the rest of RGE clean up as they prepare for the soul. Before it was able to spawn, RGE pulls the trigger early and walk over G2 as RGE took a shock Game One victory. 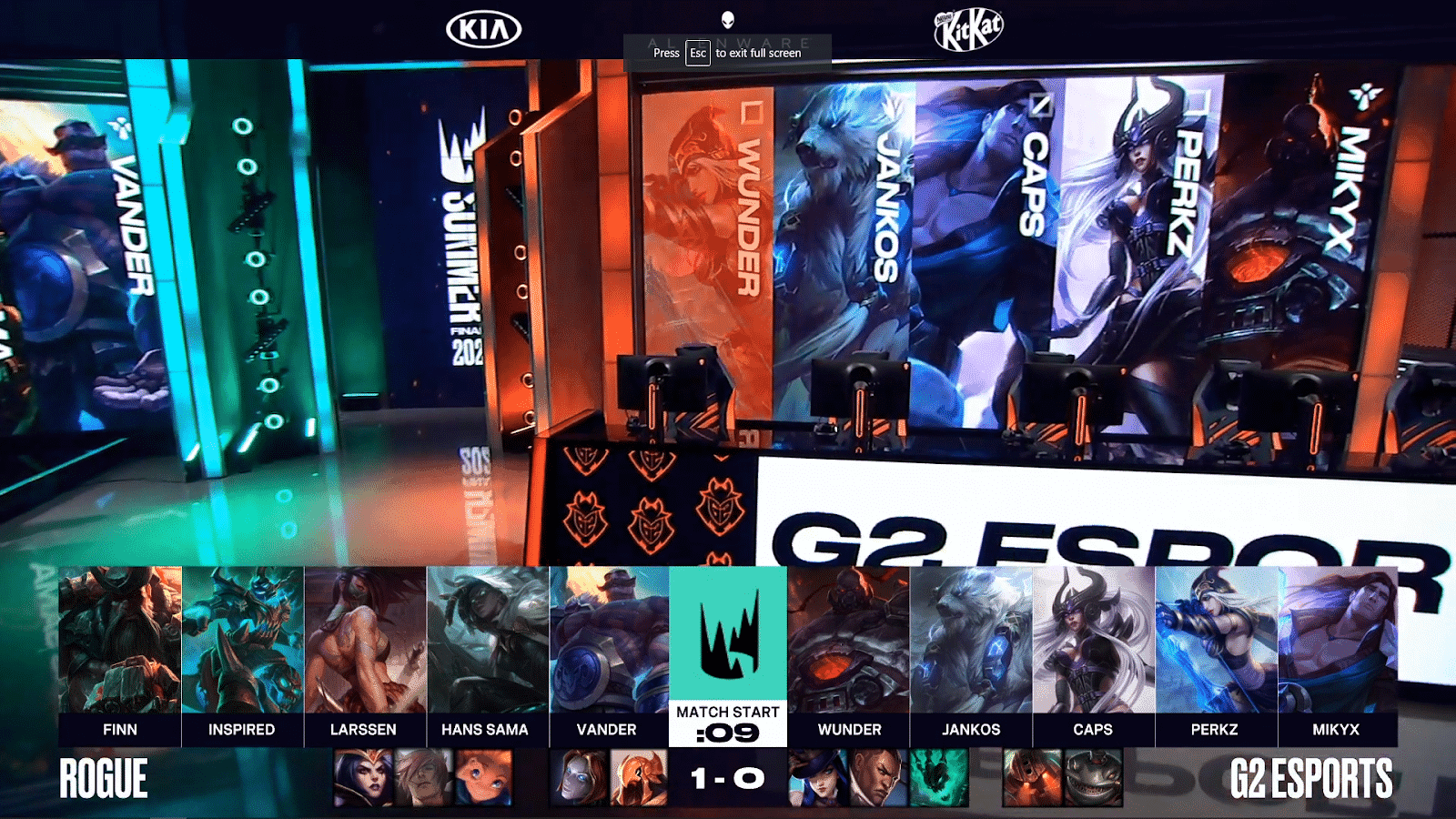 G2 bounced back quickly from their Game One loss as they end this game in sub-thirty minutes despite a rocky start. First Blood goes over to RGE again as they catch out Caps in the mid lane. With his flash burned, a repeat gank was highly likely. While the early lead goes to RGE, Game Two is much closer than Game Two at this same stage. RGE makes a play bot side but fumbles the execution as G2 sends in two TPs to claim a kill in return. Two members of G2 escape on low HP after Larssen fails to execute either.

As the game passes the 17th minute, G2 has canceled out the RGE gold lead as they try to regain their hold on the game. G2 then make a play as the Drake spawns as they’re able to take the tower and pick a kill on Inspired. G2 looked a different team in Game Two as they counter an RGE engage at bot River and destroy Inspired. With him dead, they move to Baron and take it nearly uncontested. With everyone respawned, they move to the Soul point drake and picked that up too.

Right after the drake secure, G2 pick up two more kills as they knocked down the RGE inhibitor. RGE makes one big play to try to win the game but they’re unable to make it stick. They take down Wunder’s Sion but lose Larssen in return. G2 secures all three inhibitors with Soul drake about to spawn. G2 regroup and march down the RGE base, making it look easy in the process. 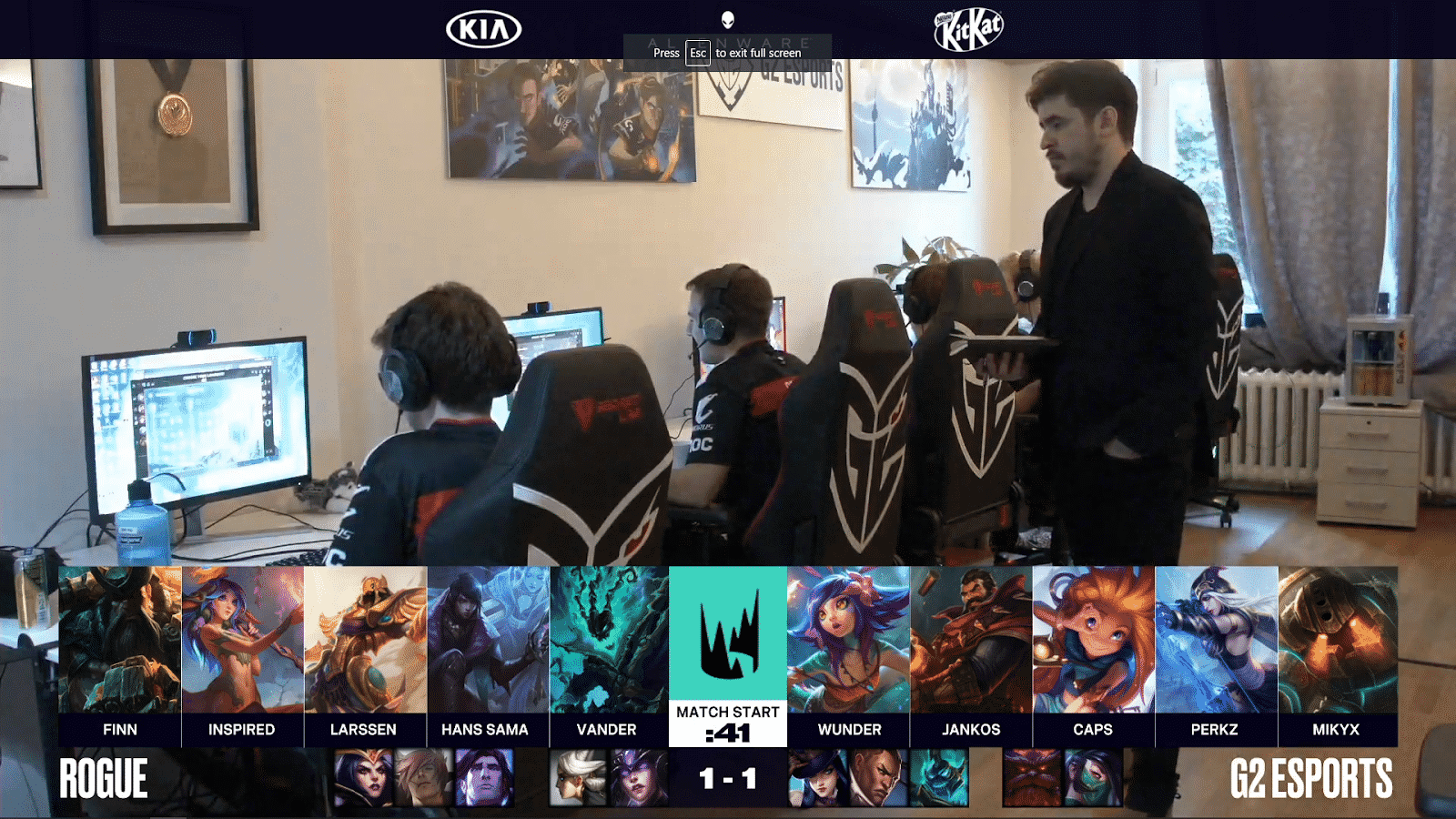 G2 takes series point as they give us our fastest game of the series, with Caps looking unstoppable on Zoe. First Blood goes over to RGE yet again as the bot lane 2v2 comes up trumps for RGE. RGE tries to make a play on the bot side of the map but quick thinking from Caps by TP’ing into the lane turns the fight. Caps arrives just in time and he picks himself up a double kill, as G2 takes a 2.5k lead.

While RGE pushes bot Lane to use Rift Herald, Caps was able to harass four RGE members on his own, even managing to pick up a kill at the tail end of the play. G2 move into the 18th minute having just picked up soul point and a 5k gold lead for their trouble as G2 looked to have fully come online. With Rift Herald used top side, G2 claims the top and mid tier two towers as they look to pile on the pressure.

A fight happens in the top lane, and while RGE picks up one kill, G2 eventually gets the delayed Ace as they look fully in control. G2 pushed mid without Baron as Caps just picks people off. Larssen almost rescues the game for RGE as he picks up three kills for himself and Finn. Perkz is able to survive and RGE managed to hold on.

With G2 now securing Baron they start to make the game-winning play through the jungle. They catch out RGE who were unable to do anything about it. G2 is able to grab the Ace as they take an easy Game Three victory. 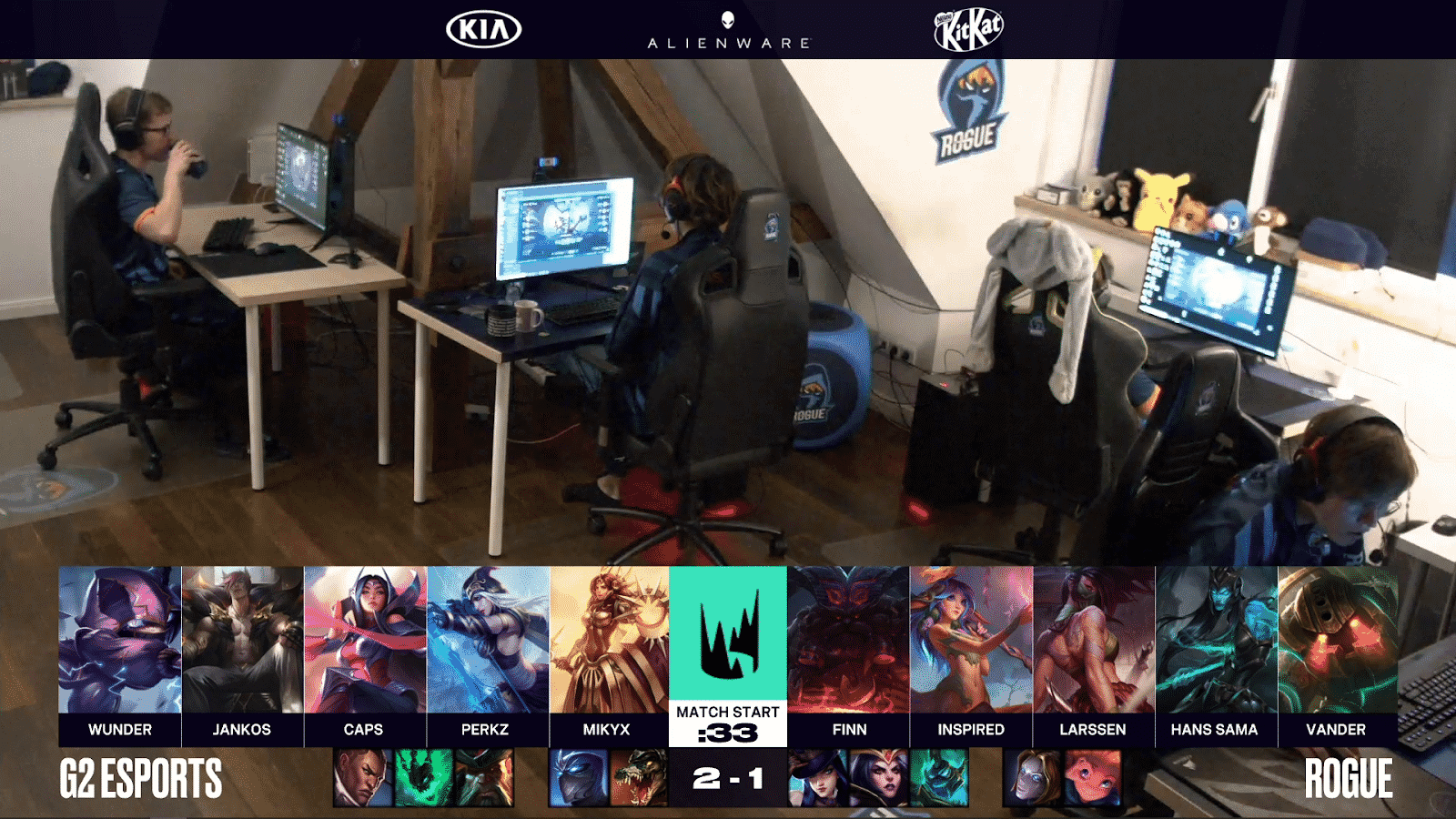 RGE takes the series to a fifth game as they take down G2 for the second time. First Blood goes to RGE yet again, as it’s another bot lane 2v2. Vander picks off Mickyx with a hook and he drops. Jankos heads bot side slightly after and is able to secure a quick follow-up kill for his side.

RGE not looking to get 3-1’d in the series has turned up in the early game. Larssen picks up two kills mid lane, while Hans Sama picks up kills in the bot lane. RGE then extend their lead nearly 3k as they win another fight topside, with Larssen picking up two more kills. RGE shows no sign of slowing down as they dive G2 under mid lane tower picking up three more kills with ease. Just 15 minutes into Game Four, RGE moved 4k ahead.

RGE slows the game down before picking up the Baron at the 25-minute mark with G2 unable to contest. With Baron ticking off, RGE made the play and flawlessly take down G2 to take the series to the full five games. 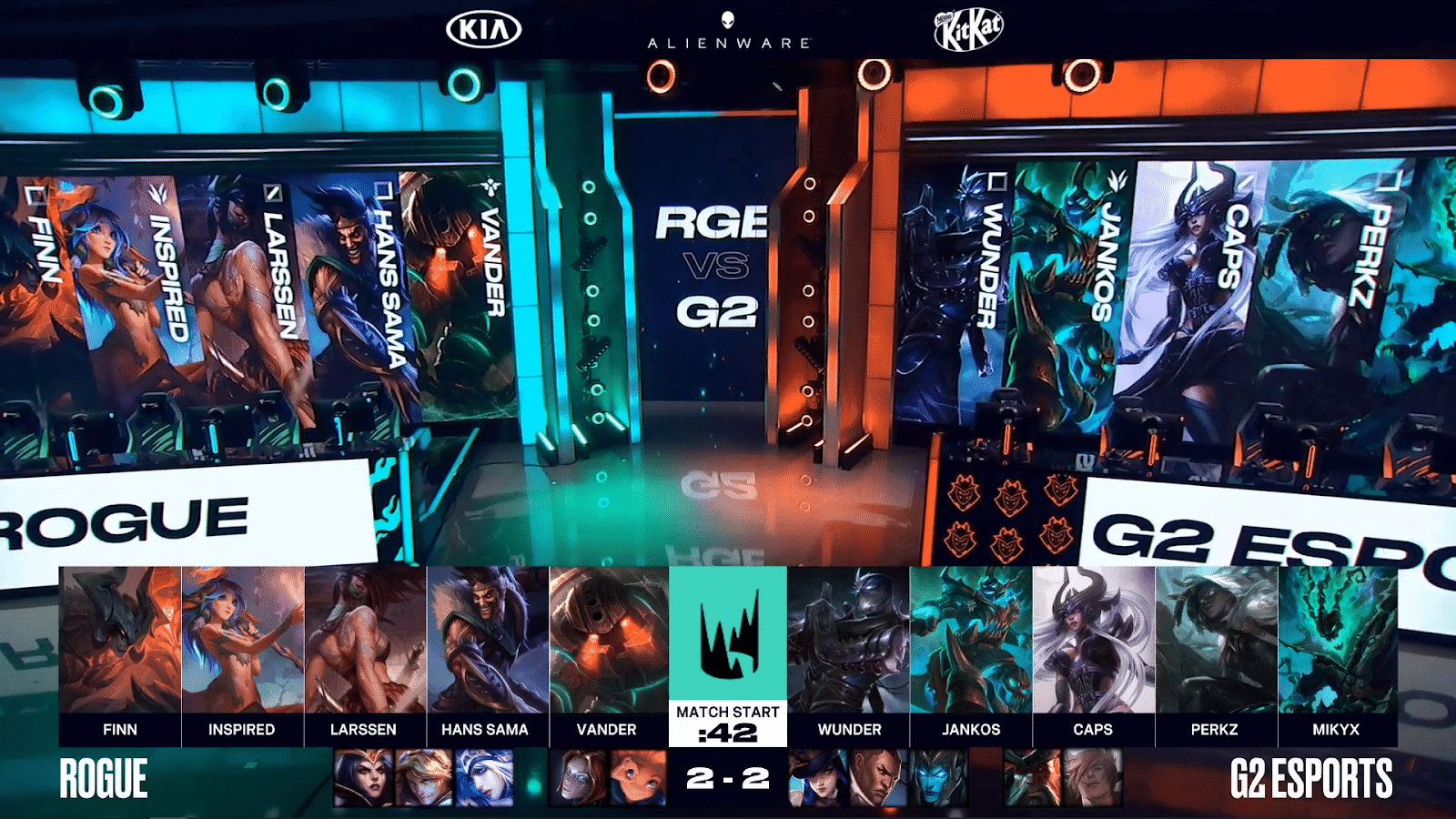 G2 takes down RGE in a nail-biting match to secure their spot in the Grand Final. First Blood goes to RGE as the Draven & Nautilus bot Lane proves too much to handle as they claim a kill in the 2v2 again. RGE continued to try and dictate the pace of the game, especially as they looked to get Hans Sama fed. G2 goes into the 13th minute with a tiny gold lead as the match evens out.

As RGE pick up their second drake, they see G2 take a small 1k lead, however, Hans Sama continued to farm up as he looked to become unstoppably fed on Draven. G2 finally started to go through the gears, as they took a 3.5k lead as RGE started to look lost and lacking a win condition. RGE finds a massive team fight as G2 tries to pin the RGE bot lane RGE quick thinking sees them TP into the lane. G2 isn’t able to get a 5v5 fight as RGE turns and fights 5v2. They collapse on Caps and knock him down as they kill four members of G2 and keep their hopes alive with the gold lead now level.

The Soul fight is started by RGE but Jankos is able to steal it, securing his team Mountain Soul. No one dies in the follow-up engagement but G2 rush to Baron while RGE reset. RGE arrives late as G2 claims the buff. The ensuing fight sees the teams trade 1-for-1. G2 hold their nerve as they collapse on the RGE base and claim a spot in the Sunday Grand Final.