With two sets of knockout games already played, it was the turn of the LEC to enter the Rift.

With both China and Korea already playing and already having teams progress, it was finally the turn of Europe and their top bracket hopefuls Fnatic (“FNC”) as they took on TOP Esports (“TES”). TOP is one of the favorites to take the entire tournament, so FNC had it all to do if they were to advance to the Semifinals.

With all that said and done, and all the hype before the game, it ultimately came down to this. Five potential matches of LoL action as the top team from the LPL took on the second seed from Europe. It was a great start for FNC as Rekkles and Hylissang were able to take down JackeyLove in the 2v2. The early game action continued with TES picking up a kill in the top lane, and a one-for-one trade happening in the mid lane. Yet another fight breaks out on the bot side and Rekkles again picks up two more kills for himself, though the gold lead remains even.

Fnatic mix it up as Singed comes out on top

A little later, FNC overreached on a fight in the top side, and cannot do anything in the 4v3. As a result, they dropped two members and TES took a small early lead. With towers dropping, FNC was able to pick up a massive two-kill team fight win in the mid lane. Although there were no objectives on the map, they evened out the gold lead once more. FNC did it yet again as they engaged onto TES and picked up three kills for nothing in return. Next, they picked up Baron on the tail end and moved 4k ahead. FNC got yet another pick on JackeyLove as they moved to Baron. They pull off from the buff and engaged onto TES, in a 4v5 they win out, picking off four members with JackeyLove rejoining the fight.

With only Knight able to defend the base, FNC is able to walk through the TES base and knock down the Nexus as they make a huge statement in Game One of the Quarterfinal. 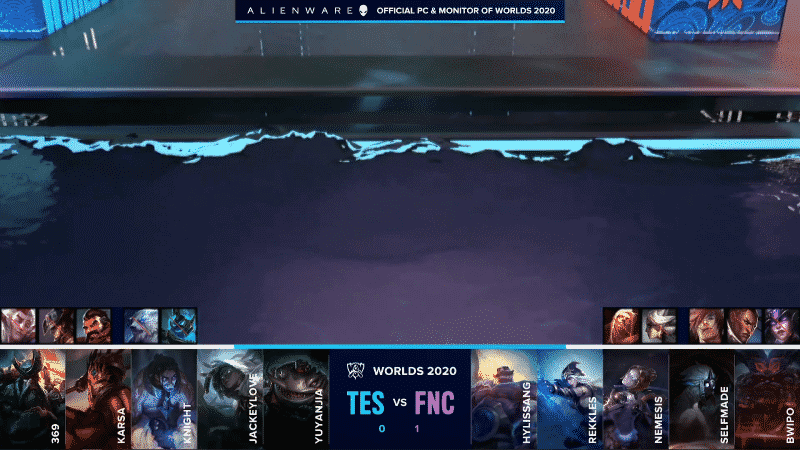 After a huge upset in game one, TES needed to get their heads back in the game after the loss. On the other hand, FNC went into Game Two with the mental edge. Given all the pre-game bot lane talk, JackeyLove especially needed to show up here, since his bot lane was previously dismantled by Rekkles and Hylissang. To kick things off, FNC picked up the First Blood but with four TPs coming into the lane, it’s TES that take a 1k gold lead as they took down three members of FNC.

Fnatic show up as they move to match point

FNC continued to punish the TES bot lane as they evened up the gold lead, though TES used the Rift Herald to soak up some plates in the mid lane to regain their lead. The game began to slow, with both sides posturing over the third drake. While TES claimed it, FNC was able to get more pressure across the Rift and at 20 minutes TES still held a 1k lead. FNC managed to find the huge fight as the map was split into bot lane and mid. FNC dropped four members with just one loss in return, claiming a free Baron after. Now, FNC had a 2.5k lead as they looked to try and close out Game Two. FNC again found a huge fight as the Infernal Soul spawned on the map, where they took down two members and claimed the Soul.

With Baron on the map, FNC instead moved to take down members of TES. First, FNC took down the TES jungler before the fight started then moved back to the Baron. Shortly after, Elder spawned on the map and it’s FNC that took it down. They managed to pick up a kill on the tail end of the ensuing fight, so FNC charged down the mid lane and tried to close it out. They didn’t hesitate at all as they took down the TES Nexus and moved to match point. 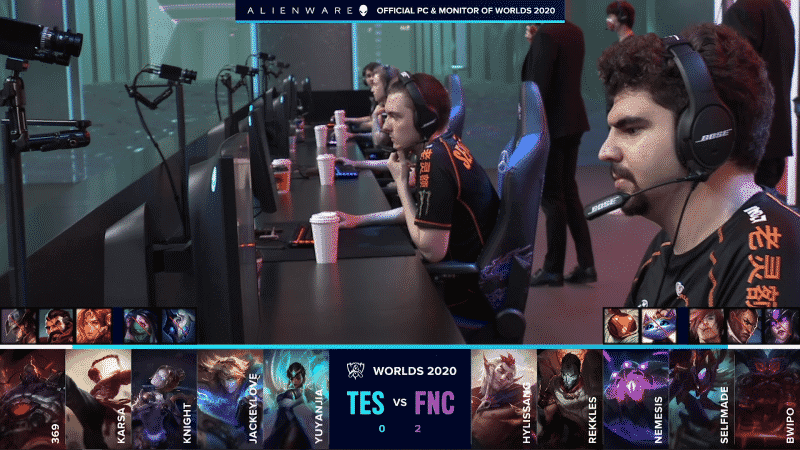 WIth FNC going 2-0 in the first two games, it was all on the line in Game Three. TES went into the series as favorites to win Worlds but they now needed to win back-to-back-to-back games to keep that dream alive. As for FNC, they were just one game away from a shock Semifinals place at Worlds 2020.

TES this time picked up the First Blood as 369 is able to 1v1 Bwipo and also manages to pick up two free turret plates. This helps TES take an early 1k lead. FNC finally got onto the map as they picked up two kills on the bot side, though Hylissang did die in return.

TES made huge plays across the map as they picked up two towers on the top side of the map and picked up two more kills for themselves without even dropping the Rift Herald. The play saw TES take a 3k lead. FNC took the second drake of the game but it cost them two kills in return with TES finally coming online in the third game of the series.

TES continued to dominate the early to mid game, claiming six towers by the 19th minute and taking a 6k lead over FNC. FNC and TES trade buffs as FNC moved to Soul point. In the fight that happened after, FNC takes two quick kills onto members of TES, picking up a third on the back end of the fight. TES did manage to take down two members of FNC, however, so they stay alive and FNC finds a win condition if the game goes late enough.

Selfmade and Hylissang tried to steal the Soul point drake but both die in the process despite their best efforts to claim it. With the death timers ticking down, TES claimed an uncontested second Baron Buff. FNC tried to make an engagement but TES is able to ignore it and take down the mid and bot lane inhibitors as they looked to close out the match. Finally, TES pulled the trigger and managed to take down the Nexus as they come online in the series. 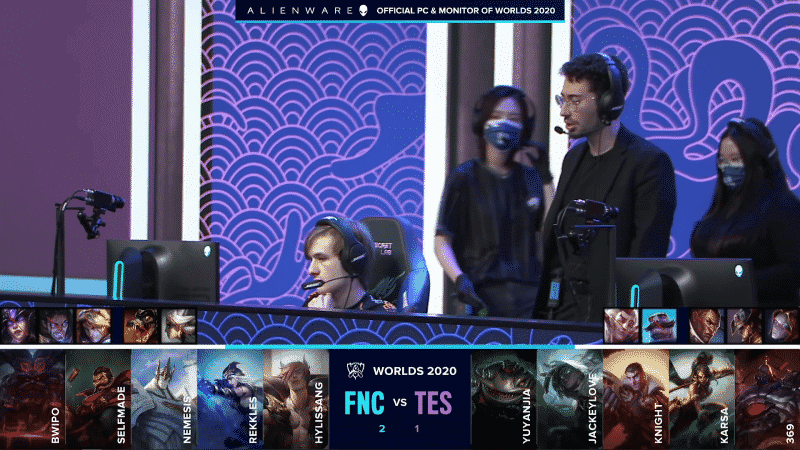 After dropping Game Three, FNC had to go into Game Four and get the win that would send them to the Semifinals. For TES, the victory was a momentous one and could be exactly what they needed to get back into the series.

First Blood goes to FNC as they grab a kill in the top lane, before also grabbing a kill in the bot side as they take a small 1k lead early. FNC again made a play in the bot lane to claim a kill, however, this time TES did reply and picked up a kill for themselves as they kept the gap at 1k. Just a minute later, another 3v3 happened in the bot lane and a two-for-two trade went down. On the other side of the map, FNC’s Rift Herald was able to secure the bot lane tower as FNC grew their lead.

TES takes us to Silver Scrapes

Then, a big 5v5 happened in the mid lane. The early fight was a one-for-one trade but both teams looked to disengage from the fight because of the second drake spawning on the map. But FNC doesn’t wait as they go in early and take down two members of TES early for the loss of only one. With the fight going even longer, FNC yet again took it four kills to three to maintain their lead. After all this, FNC used the Rift Herald top side, then took the top two outer TES turrets and chunk down the inhibitor tower.

As Baron spawned onto the map, FNC held onto a slight 1k lead. With the fourth drake spawning, a crucial fight starts. TES snags two early kills, as FNC didn’t have the damage to take down the members of TES. As a result, TES moved toward the Baron and tried to close out the game. FNC do, however, claim the Ocean Soul point, giving them a win condition when that spawns.

With TES pushing in the base they clam a big kill onto FNC as the FNC base opened up and TES moved 5k ahead. TES are just too strong as more members of FNC drop and their Nexus goes with it as TES take us to a fifth and final game. 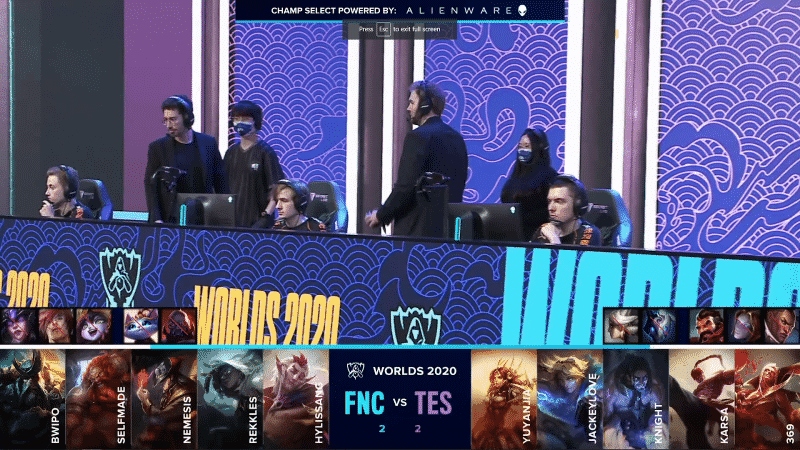 And with that, we moved to Game Five- our decider for the entire series. FNC started with two wins but dropped the following two games. With both sides showing weakness across the series, it would all come down to one final game to decide the fate of both sides at Worlds 2020.

First Blood goes over again to TES, as they gank the FNC mid lane while Nemesis was too deep in the lane to react. It went from bad to worse for FNC as TES began to take an early game lead after picking up the first Rift Herald. Despite FNC trying to make plays on the top side of the map, with Bwipo picking up a solo kill onto 369 for example, FNC continued to lose people across the map. Because of this, TES’s gold lead moved to 2k.

TES dominate as they secure the Semifinals spot

Finally, FNC does find a play. They picked up two kills in a lower river engage right as the third drake spawned on the map. Winning this fight meant delaying a Soul point drake and keeping themselves in the game. But later on, TES managed to claim an easy Soul point and take down two members of FNC for good measure. Afterward, they moved up to the Baron to try and end the game at around the 22nd-minute mark. FNC managed to find an engagement on JackeyLove but they just didn’t have the damage to take him down in time. Both teams limped away from that play but TES destroyed two more turrets around that time. FNC do it again but this time TES turn it around, so they lose four members of their team. From here, it looked all but over with just Selfmade defending the FNC base.

TES pushed into the base and overturned the 2-0 start to reverse sweep FNC as they locked in a spot in the Semifinals. They set up an all-LPL Semifinal as all of the LEC hopes are put onto the shoulders of G2 Esports on Sunday.

How To Quickly Max Out Your Character In Scott Pilgrim vs. The World: The Game – Complete Edition

How To Quickly Max Out Your Character In Scott Pilgrim vs. The World: The Game – Complete Edition