In the final Worlds 2020 Quarterfinal series, it was the last attempt for the LEC to get a team to the later stages. With Fnatic falling 2-3 to TOP Esports, despite a 2-0 lead, G2 Esports had all of EU’s hopes on them. Gen.G was the team that snatched the top spot in Group C away from Fnatic after coming third in the LCK. G2 Esports were the favorites coming into the series as they looked to set up a matchup against the LCK first seed Damwon Gaming.

With how the drafts went in Game One, we were certainly in for a spicy one. G2 drafted for an aggro, all-in style, especially in the bot lane. Meanwhile, Gen.G went safer, trying to mitigate the aggression. Gen.G were the ones that pick up First Blood as G2 tried to punish a dive in the top side. G2 are able to pick one up in return but Gen.G took two in total. But G2 did manage to close the early lead gold gap as the 10-minute mark sees both teams even up on 17.5k each.

G2 comes up big in the team fights

Gen.G had focused on taking dragons all game and is able to pick up an easy Soul point as G2 just can’t move into the pit to stop it. However, G2 does move to 2.2k gold ahead as they continued to get small picks across the map. G2 are yet again able to get a massive pick up on Gen.G as they quickly collapsed onto Gen.G in the top side jungle. They transferred that into a Baron Buff, before claiming yet another kill and crucially taking the fourth drake. G2 finds another massive engagement soon after and this time they get early kills onto Life and Bdd. In the ensuing fight, they chase down the remaining members of Gen.G and picked up a clean Ace as they moved to claim their second drake. However, they split their resources so are unable to claim the Baron.

Feeling desperate, Gen.G forced a Baron. Despite getting an early kill onto the G2, they were unable to make it stick as G2 Aced them and charged down the mid lane to take the game. It looked a little ropey at the start but G2 turned it on in the mid lane and it never really looked like any other result was likely after Caps was online. 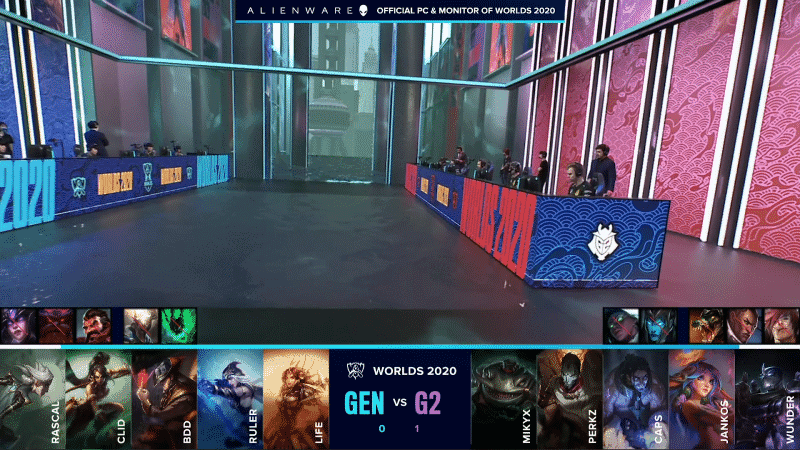 After seeing the winning draft in Game One, Gen.G decided to copy half of it and try it for themselves. G2, however, countered with the Sylas and Shen, giving them even more roaming potential. Regardless, G2 looked dominant in the first game, albeit once the lane phase was over, so Gen.G needed to snowball a lead much better in Game Two.

Gen.G managed to pick up a massive First Blood after G2 engaged in the bot side. G2 fumbled the play and lost three players across the fight, taking only two in return. With this, Gen.G moved to an early 1k gold lead. Even more action breaks out, but this time G2 came out on top picking up a two-for-one kill trade in an extended top side jungle fight involving both junglers and mid laners. The never-ending fighting continued as G2 picked up yet more kills after a one-for-one trade on the bot side. Here, Caps roamed down and G2 picked up two more kills, moving to 1k ahead too.

Caps carries his team with his 25-stack Mejai’s

Next, G2 forced a collapse in the mid lane as they claimed four kills for two in return. They showed the power of having two long-distance ultimates as they maintained their gold lead, though Gen.G picked up the Rift Herald to close the gap slightly. G2 once again countered a Gen.G engage as they tried to make a play onto the three members of G2 but G2 manages to turn it around and win the fight. With that play, G2 pushed their lead to 4k, as Gen.G didn’t seem to have an answer for their comp. Moving forward, G2 punished Rascal and took down the bot lane Inhibitor tower. Gen.G again tried to force an engagement in the mid lane but they’re unable to execute on the play as, once again, G2 are the ones to come out on top. As a result, G2 moved their lead to 7k.

But then it appeared like Gen.G finally managed to get the pick they needed. They took down two members of G2 at the start of a fight but Caps was able to steal a Leona ultimate and used it to absolutely destroy Gen.G yet again. Seeing their opportunity, G2 pushed down the mid lane to look for the end. Caps came up clutch and carried G2 in another team fight as he once more proves just why he’s so important to G2. 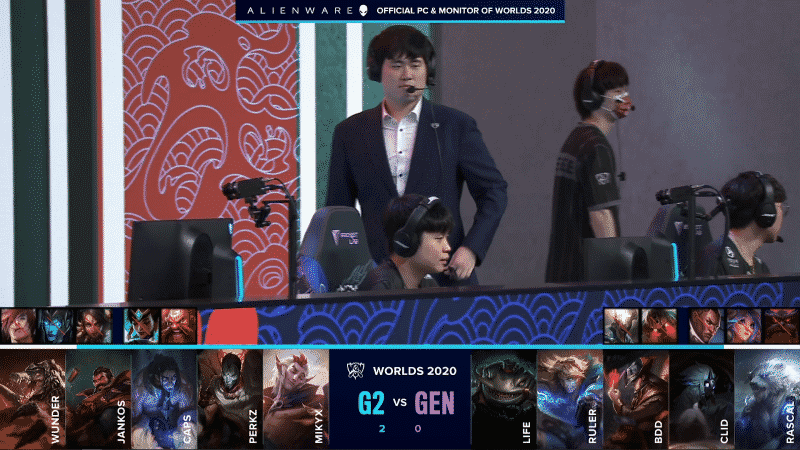 After two dominant games for G2, they needed just one more to take the 3-0 and do what Fnatic was unable to do. As for Gen.G, they had it all to do in Game three, needing to win three games in a row to keep their Worlds 2020 dream alive.

G2 is able to get the First Blood after they baited Life into stopping Perkz’ back, with Caps TP’ing into the lane to pick up the important kill. G2 also picked up a one-for-one trade on the top side. However, it costs Gen.G major Summoner Spells across their lanes. G2 then doubled down and made a five-man dive bot side as they claimed two more kills and moved to 2k gold ahead. Gen.G got themselves onto the map as they picked up three massive kills in the bottom river, halting the G2 snowball.

Gen.G puts up a fight but it’s not enough

Despite equalizing the gold lead, G2 was able to win a massive team fight as they took down three members of Gen.G and moved back to 2k ahead. Gen.G managed to catch out Perkz but they cannot take him down. G2 backs up their ADC and snags a kill onto Clid. With that pick, G2 moved to 4k ahead with Gen.G continuing to struggle to find a way to win. Gen.G again forced a play onto G2 and this time they did pick up three big kills at the start of the fight. Wunder and Caps tried to do something to stop them but they can’t knock them down. Gen.G moved to Baron and looked to finally come alive in this series.

The big fight goes down over the Infernal drake. Despite an early pick onto Caps, GEN can’t finish him off. Because of this, G2 is able to claim the Infernal soul and take down three members of Gen.G. As a result, Gen.G, unfortunately, goes negative in the Baron Power Play. With the Soul buff, G2 charged down the Gen.G base and took down three members in a massive engagement by Caps, utilizing a stolen the Volibear ultimate. G2 took down the inhibitor but Gen.G killed two members of G2 as they retreated. Finally, G2 found the game-winning fight. Here, they found huge picks onto Bdd and Rascal as they looked to end the game and take a fantastic 3-0 series win.