Day Two, what’s in store for us today?

After an exciting Day One of the 2020 League of Legends World Championship, Day Two delivered six more games for fans to enjoy. It’s time to dive right back into the action!

Team Liquid (“TL”) held back no punches with a quick First Blood onto Tactical’s Caitlyn with the Caitlyn Lux combo right before the three-minute mark. However, Gemini was not to be outdone, as he immediately flashes on to TL’s Jensen to get Mission a kill and Machi Esports (“MCX”) on the board. The game seemed to settle down after the initial action as both teams continued to farm.

MCX seemed to have some mixed feelings about what the correct call is as PK dies top against Impact while Gemini was on the Rift Herald at eight minutes. Gemini then shifts his focus and gets MCX the Earth Drag at 10 minutes. Gemini and Impact trade flash as MCX Rift Heralds the top tower at 14 minutes to secure First Tower. Team Liquid responds with their own tower bot side immediately after. MCX and TL continue to trade value across the map as they again trade top tower for bot tower.

Machi began to win mid-game exchanges with a pick on Jensen in TL’s blue side jungle and allowing them to get the Cloud Dragon at 21 minutes. TL’s Impact gets caught out bot side and Tactical gets caught out top side allowing MCX to secure the Cloud Drag and acquiring Soul Point. Machi secures the Baron and Cloud Soul giving them absolute control over the game. MCX secures their second Baron and closes out the game at 37 minutes, TL unable to find an answer all game. 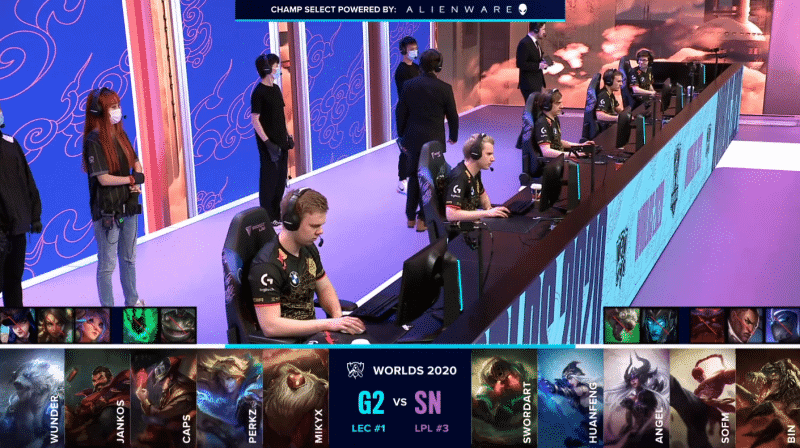 G2 Esports (“G2”) versus Suning (“SN”) is an exciting matchup between the two powerhouses of Group A. SN starts the game off strong with almost every lane having priority allowing for SoFM to secure a double crab start. Jankos then attempts a solo invade for Raptors at six minutes and dies to Angel. SN then gets the first drag at eight minutes, but G2 strikes back with an Ezreal TP from Perkz at 10 minutes to get a two-for-one. Angel then gets caught in G2’s bot side jungle making it an overall three-for-one trade.

The game continues to be a fierce battle between the two teams. The gold is relatively even, however, SN leads with the two dragon advantage. G2 and SN skirmish for the third drag, Perkz gets caught before the objective is taken, but before SN can secure it, Caps steals the Ocean Drag with a clutch Wild Cards. G2 gets a pick on Angel and starts Baron, but SN counter-picks Perkz and the match falls back to a stalemate. Both teams again decide to skirmish for drag, SN completely overwhelms G2 in the skirmish giving them an Ace and the Ocean Drag.

Buffs, base defenses and backdoors

Five minutes later both teams are again ready to fight for the dragon. In a nail-biting skirmish, SN comes out on top allowing them to secure the Ocean Soul. Things are looking grim, but G2 isn’t ready to give up yet. G2 steel themselves for the Elder Dragon fight knowing how crucial the buff is. Kiting along the outskirts G2 tactically plays for a slow skirmish utilizing the space Ezreal provides. Finally seeing an opening Caps Destiny’s onto Angel killing SN’s mid-laner. G2 wins the ensuing fight securing the Elder Dragon and Baron Nashor.

G2 then goes for the end looking to utilize both buffs, but overcommits on the fight and gets aced by SN in their attempt to end. SN then pushes down mid and looks for the counter end, but G2 is ready to hold sacrificing their Nexus Towers in the process. Amidst the fight, Perkz sees the opportunity to go for the backdoor teleport and wins the game at 42 minutes 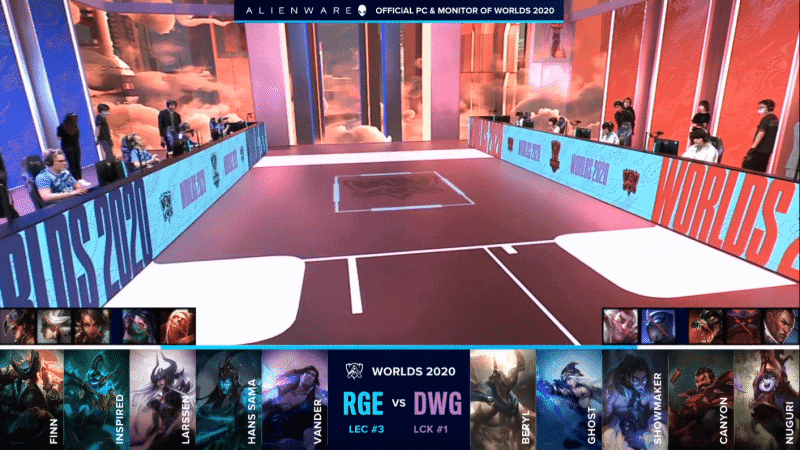 Rogue (“RGE”) versus Damwon Gaming (“DWG”); the European third seed against the Korean first seed. The game was a constant offense versus defense with RGE always looking to thwart DWG’s aggressive advances. DWG opened up the game with first blood onto Finn with a tower dive at three minutes. Canyon then continued to power farm with a lead with the help of his three winning lanes.

DWG looked to continue pressuring RGE by forcing a play onto Larssen, but BeryL overcommitted, and Larssen picks up a kill instead. The game continued with DWG pressuring and RGE containing the pressure from the Korean powerhouse. As the game approached 20 minutes RGE found themselves down 5k gold with the only positive thing being Inspired winning a 50-50 smite on the Earth Drag to keep them afloat.

However, eventually, RGE’s shield would crack and the game would finally burst open. Larssen aggressively looks to find a stun as Syndra which allows Ghost to find an Arrow onto RGE’s mid laner leading to a kill. DWG then immediately turns to Baron and Inspired goes for a desperate steal and is unable to find the smite. DWG then cleans up the map and wins the game in 33 minutes in a scrappy, but convincing win. 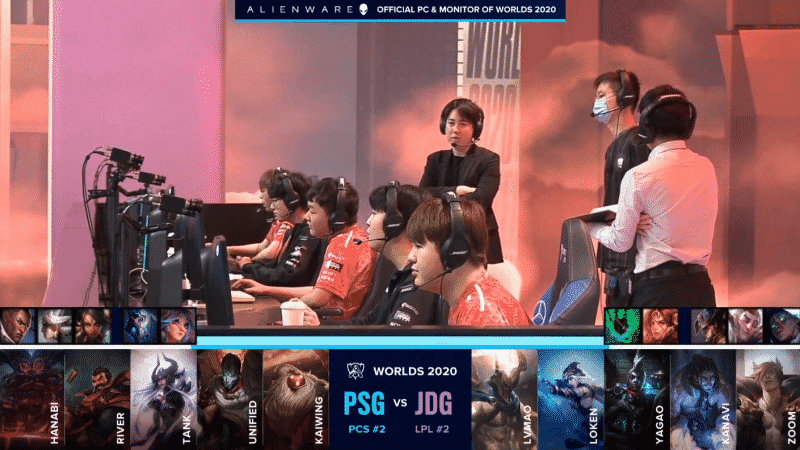 After a rough game against Damwon Gaming, JD Gaming (“JDG”) was looking to prove themselves. JDG was holding back no punches against PSG Talon (“PSG”) with cross-map early game pressure in typical LPL fashion. JDG got a dive on PSG’s bot lane at four minutes off the back of the strong early game pressure from LvMao Pantheon. They then translated that pressure from bot to topside to find a level four River against Zoom’s level six Sett. As if things couldn’t get any worse JDG then denied PSG’s dragon leaving them with nothing to hold onto.

PSG attempted to fight back against JDG to no avail. Zoom and LvMao massacre PSG’s bot lane having them begging for some kind of assistance in the bot lane. JDG’s onslaught of pressure leads them to an 8k gold lead at 16 minutes which then becomes a 10k gold lead at 19 minutes. JDG closed PSG out in 23 minutes making everyone forget about yesterday’s defeat. 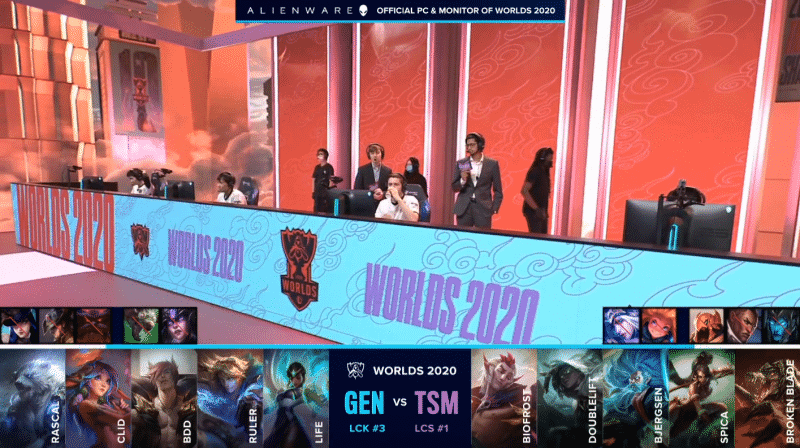 TSM was looking to make a statement by locking in signature picks such as Nidalee and Senna despite yesterday’s defeat. Gen.G (“GEN”) on the other hand was simply looking to clean up their game to avoid any close calls. TSM was able to strike first with a kill onto Rascal’s Volibear after a full top clear from Spica. However, while TSM was up on kills both the jungle and mid were down 20 CS a piece at five minutes in. Looking to pick up the slack for their team Doublelift is able to find a flash root on to Ruler at eight minutes securing a kill for TSM.

Although things looked close the experience differential across the board would continue to plague TSM throughout the game. The trend would continue as TSM would look to find kills to make up for their deficit while GEN would continue to build upon their already solidified lead. Rascal was at the receiving end of multiple TSM advances surviving most of them, but finally, TSM found the kill onto the Volibear at 19 minutes.

A skirmish would soon break out in bot lane as TSM and GEN locked into 5v5 where both teams fought, but none of the members died. TSM repositions to control the dragon and GEN responds but collapses on Doublelift breaking apart TSM’s hold and securing the third dragon. TSM would then get swept in GEN’s blue side jungle allowing GEN Baron Nashor and the win at 27 minutes. 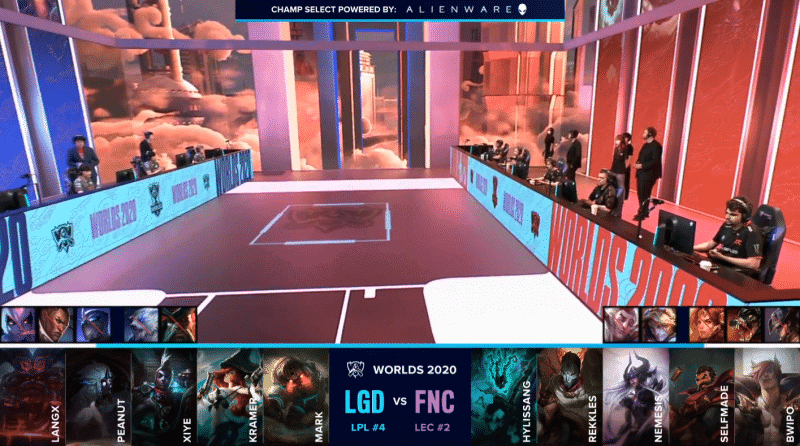 An interesting matchup that could shake up the group for the next few days. Fnatic (FNC) made the first move this game by pressuring LangX at four minutes forcing him to TP back to base, setting him behind in the early game. However, LGD Gaming (LGD) recognizes that they have more pressure in mid and bot lane and start the Ocean Dragon at six minutes. Continuing the pattern of shifting pressure Fnatic then responds with a kill on LangX, Xiye attempts to cover, but can only find Fnatic’s top and jungle running off with the kill.

FNC and LGD would continue to trade pressure throughout the game with close fights and constant objective trades across the map. However, at 22 minutes the tide would begin to sway in LGD’s favor. In a team fight in the mid lane Bwipo and Nemesis commit to killing Loken, but Peanut casts a clutch Lamb’s Respite saving his ADC and turning the fight in their favor. As the tide was turning for LGD, FNC made one final hold at 28 minutes winning the team fight and securing their second drag.

That would be FNC’s last hold on the game, however, because Selfmade would get caught at 31 minutes and Bwipo would be forced to teleport to save his jungler. Soon after LGD starts Baron, but decides not to finish it, recognizing that Infernal Soul should be the main objective they focus on. FNC and LGD once again fight over the dragon, but this time Xiye is prepared. He lands a massive flank on FNC’s backline, winning them the fight and leading to LGD’s Infernal Soul and Ace on FNC. LGD would then end the game at 34 minutes in a convincing fashion.