Day Three of Play-Ins decided who moved on and who went home.

Stakes were high on Day Three of the 2020 League of Legends World Championship Play-In Stage. Day One and Day Two delivered a ton of great games and set the stage for an epic conclusion. On Day Three, teams Group B had to fight hard to make sure they stayed in the competition, or better yet, secure a ticket straight to the main stage. Four games were scheduled, but ties ensued amongst the teams. As such, fans got two additional games for free! With all that said, here’s everything that happened on the day.

LGD (LGD Gaming) was looking to bounce back from yesterday’s defeat while V3 Esports (“V3”) was looking to find more stability in the group. LGD drafted a scaling comp around enabling Peanut on the Kindred. V3 drafted for early to mid-game play-making with a well-rounded comp that spikes earlier into the game. The game starts with no kills in the first 10 minutes with V3 controlling the first two objectives of Cloud Drag and Rift Herald.

However, Langx decides to take the game into his own hands at 11 minutes by solo-killing Paz, V3 attempts to respond with Lee-sin and Zoe, but are unable to find a return kill. At 13 minutes V3 and LGD fight over the Infernal Drag leading to Peanut winning the smite fight over the drag. LGD continues to pressure the map by taking the first tower mid lane at 15 minutes then rotating to V3’s blue buff and killing Bugi. At 18 minutes V3 and LGD once again fight over the drag with V3 out skirmishing LGD and getting the Ocean Drag with a kill on Xiye on the side.

Despite winning skirmishes V3 found themselves down 5k gold at 22 minutes. LGD recognizing this takes the dragon fight once again, this time finding the team fight win along with the Ocean Drag. 28 minutes in Mark over commits on a play and finds himself dead leading to V3 starting Baron. LGD fights back and routs V3 at baron with Kramer getting a triple kill. LGD continues to pressure the map, getting Ocean Soul and winning the game at 36:28.

Rainbow7 vs Unicorns of Love 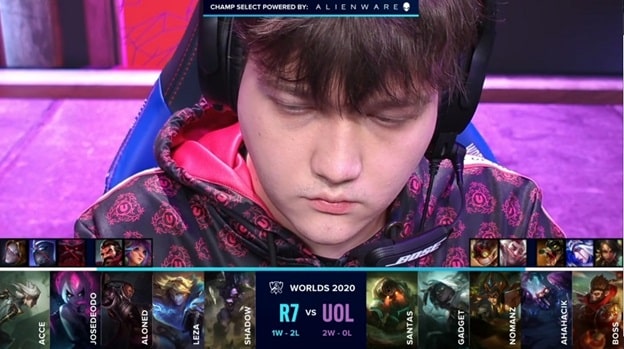 A clash of two styles, R7 (Rainbow7) with play-making champions versus, UOL (Unicorns of Love) a straight forward front to back team composition. The early game action begins with a 2v2 scrap in the mid lane around 5 minutes with AHaHaCiK burning flash but finding nothing. At 7 minutes R7 finds first blood onto SanTaS with an aggressive tower dive bot lane thanks to Acce teleporting in.

UOL gets Infernal Drag at 10 minutes despite being down 1k gold. They then attempt to transition from drag into bot lane, but R7 is prepared and turns the fight around and by getting three kills and the first tower. R7 continues to snowball the mid-game taking outer mid tower at 15 minutes and Rift Herald and Ocean Drag right after. A crazy team fight breaks out at 16 minutes in UOL’s blue-side jungle leading to R7 acing UOL with UOL only getting one return kill.

R7 secures the baron at 20 minutes and trades one for one in the following fight. UOL then sets up a bush kill on Leza outside the botside gate with minimal success trading their whole team just for a single kill onto Leza. R7 then wipes UOL at 27 minutes leading to breaking UOL’s nexus at 27:32 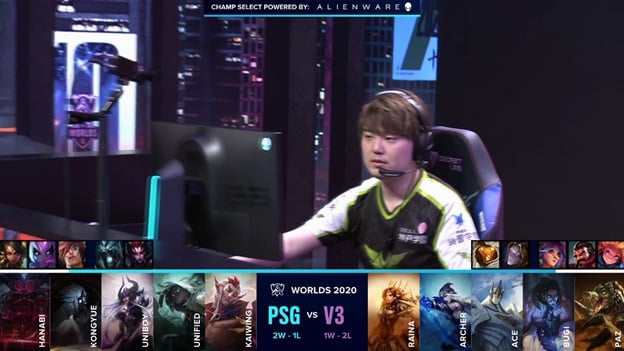 In the third game of the day, PSG (PSG Talon) “unified” with Unified looking to power up with an additional member, as V3 (V3 Esports) are looking to bounce back from an earlier loss. PSG struck first with early first blood onto Ace with Kongyue getting a successful gank on V3’s mid laner. Kongyue takes control of the early game bullying Bugi off of his red buff and top-side skuttle crab. Uniboy then continues the pressure solo-killing Ace with a quick Scatter the Weak into Unleashed Power.

V3 gets their first kill topside on Ornn trading Hanabi for Bugi desperately trying to get on the board. However, Kongyue and Uniboy have no plans of letting V3 back into the game. Kongyue brings Rift Herald to the mid lane and takes V3’s mid-tower at 10 minutes.

Kongyue over commits for Bugi at 12 minutes at top side golems, Bugi steals Kongyue’s Kindred ult and turns the fight around leading to a double kill for Paz’s Renekton. A crazy team fight breaks out in the bot lane with all five members showing up for both teams, PSG barely wins the fight leading to PSG getting their second drag of the game. V3 continues to look for plays with an Enchanted Crystal Arrow on Uniboy picking up Syndra’s bounty.

PSG finally found the fight they were looking for at 21 minutes with a clean ace onto V3 securing the third dragon and the Baron. V3 takes a desperate fight on to PSG at 23 minutes in the blue side jungle leading to four V3 members getting killed. PSG closed out the game with a clean team fight in the mid lane off the back off of flash engage from Kaiwing’s Rakan.

Unicorns of Love vs LGD Gaming 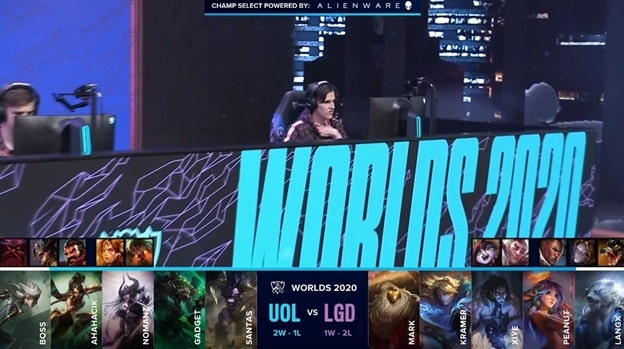 LGD (LGD Gaming) looked to close the day out with a solid 2-0 while UOL (Unicorns of Love) looked to find a victory. Xiye opens the game with a solo kill at 2:50 on Nomanz, they trade flash for flash and Nomanz teleports back to lane. Langx follows Xiye’s lead and gets his own solo kill in the top lane on BOSS with a flash q as Volibear. LGD goes for an aggressive play on Gadget at bot tower, but UOL is prepared and covered resulting in nothing. UOL then has a positional advantage and gets Mountain Drag at 10 minutes.

Xiye overcommits on a bot play and gives a kill over to Gadget at 12 minutes. Gadget finds two solo kills in a row, killing Xiye at 15 minutes and then Kramer at 15:30. Nomanz continues to misposition, giving up a kill to Xiye at 16:30 as the game continues to battle out. Mark engages a team fight with Bard ultimate at 21 minutes, but UOL wins the fight and secures their third dragon. LGD finds a pick on Gadget but loses the ensuing fight with AHaHaCiK finding a crucial pick onto Kramer’s Ezreal.

UOL secures the Infernal Soul at 27 minutes and aces LGD off the back of Gadget’s Twitch leading to UOL obtaining the Baron. LGD makes a pick onto Camille in bot lane and then transitions into a team fight victory topside. But BOSS responds right away with a teleport into LGD’s base, taking two nexus towers and bot inhibitor tower. UOL gets the Elder Dragon at 34 minutes and takes the nexus at 34:37 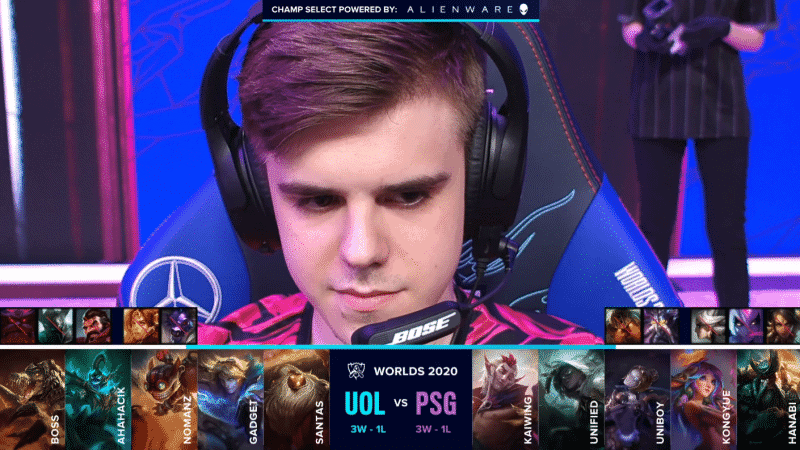 The first tiebreaker was an insane one. It started off with UOL in the driver’s seat, as Nomanz secured First Blood onto Kongyue in a mid lane skirmish. Kongyue did find some bit of revenge on UOL by ganking and kill Boss top though. However, UOL gained a decent gold lead by taking the Rift Herald, then dropping that top with their Ziggs to claim the First Tower bonus.

UOL continued to grow their lead and PSG didn’t appear to be able to do much. First, UOL dove and killed Unified under his bot tower, then cleaned up some objectives. They didn’t get many kills but were accumulating a steady lead. It grew larger when, at 23 minutes, the squad dove and killed Hanabi under his bot lane tier two. But then came a shocker. UOL tried to repeat the play on Hanabi, but were overzealous. PSG collapsed on the play and ended up killing four from UOL. UOL did take the top lane Inhibitor during this time, but at the cost of that team fight and a Baron.

This momentum shift was enormous. It was obvious that PSG now had full control over the game, but it didn’t appear as though UOL was totally out of it. That was until 32 minutes. At this point, Kaiwing made an incredibly fast, effective engage onto UOL. The team fight ended as quickly as it began as PSG slaughtered all five UOL champions. Seizing their opportunity, PSG wasted no time in running down mid, smashing UOL’s Nexus, and securing their spot in the main event. 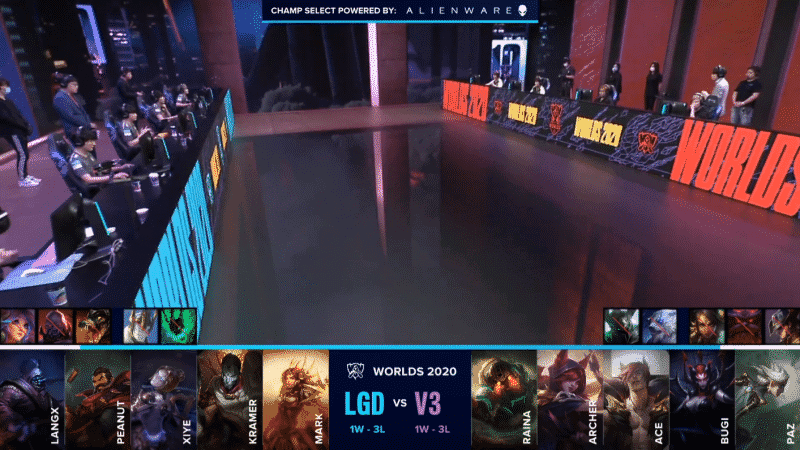 This second tiebreaker of the day was fought for one of the teams to keep their tournaments hopes alive and not go home early. Unfortunately for V3, LGD put on a clinic and sent them packing. LGD began their snowball by meeting V3 at the Herald. Here, they repelled a V3 engage then picked off Paz to kill him for First Blood. What was more important was the 14-minute team fight bot. This fight was horrible for C3, as LGD cut down four of their champions, taking a dragon and plates afterward to boot.

Even though it was only the second fight, V3 already looked doomed. The Chinese squad secured the First Tower bonus in the middle lane, knocked down the top tower a minute later and then a second Herald. To their credit, V3 did pull off a three-for-two fight, showing they were still trying to make plays. But, due to their composition’s restrictions, it was too late. At 24 minutes, another large fight erupted at dragon. Unsurprisingly, LGD won again, this time killing four and procuring the Baron buff soon after.

Equipped with the buff, LGD made short work of both the bottom and middle Inhibitors. They attempted to push further, but V3 ended up repelling them temporarily. Fortunately for LGD, all they had to do was wait for the second Baron. So they did, and almost as soon as it spawned, LGD slew it. V3 tried desperately to get to the pit but couldn’t get there in time, instead they walked straight into their dooms. LGD fully engaged on them and killed four before sweeping into their base, destroying their Nexus and sending the LJL representatives back home.