Rating: Everyone
Reviewed on: Xbox Series X/S
Also on:
PlayStation 5

Any athlete will attest that you can do all the right things in the off-season and still come up short. Visual Concepts clearly worked to up its game with NBA 2K21 and deliver better results. However, this wasn’t a typical off-season for Visual Concepts; the team wasn’t just trying to take NBA 2K to the next level, it was trying to take it to the next generation, being the first sports game to go all-in on the new console power of the PS5 and Xbox Series X. The result is a valiant effort, full of great new features and impressive visual leaps, but it’s clear there’s still some seasoning and adjustments to the playbook that need to be done.

Visual Concepts released a version of NBA 2K21 back in early September (for PS4, Xbox One, PC, and Stadia), but this next-gen edition was built from the ground up to harness the power of the new hardware. Some things from the earlier release carry over, like the bulk of Junior’s MyCareer story, but it also has new modes, as well as important tweaks such as smoother movement and more realistic contact. Most importantly, the long load times that have plagued the series are a thing of the past. Games load in seconds, getting you right into the action. The only hiccups I noticed were when my player went to the bench for a substitution and between periods; sometimes your player just stands stoically for a few moments during this transition. It breaks the immersion since everything else functions just like you’re at an actual arena, including a lively crowd and staff performing various tasks.

Minor issues aside, Visual Concepts continues to deliver stellar gameplay that looks and feels straight out of the NBA. The new-gen tech has only added more authenticity and variety to the on-court action. Being able to change up the speed of your dribble and size-up moves makes ball-handling feel great and gives you tons of options. I loved being able to use hesitations, escapes, stepbacks, and crosses to throw off defenders, and this new dribbling quickly became my favorite upgrade. Passes also look more realistic, especially alley-oops off the glass to teammates. A new lead-pass mechanic, alongside the addition of bounce-touch passes, makes it so you always have varied ways situations can play out.

As with past entries, certain players have signature moves, and Visual Concepts has only added to the realism with new skills like LeBron James’ suspended dribble. It’s cool that players move or play differently depending on who they are, their position, and how they’re built. I was constantly wowed by the level of detail in every player model, from their likeness to their real-world counterparts right down to their facial expressions and dripping sweat in intense moments. NBA 2K21 is easily one of the best-looking games on the new consoles.

Another high point is the addition of The W, which allows you to can create your own WNBA MyPlayer for the first time and build your own path to stardom by playing for one of the league’s 12 teams. The level of detail in this mode is great, as I loved learning more about the league and its players from the announcers and games feel different from the NBA with a more technical and team-centric style. The W doesn’t have a cinematic experience like the main MyPlayer mode, but you do get to build up your popularity, wealth, team chemistry, and progression by choosing between different things to do on your day off, like volunteering for a youth program or streaming NBA 2K21.

You have to fill in the blanks to your own story through these small choices, interacting with other players via text messages, and your social-media feed, but the crux is focused on being a visible role model and bringing other young girls into the sport, which I think is fantastic. I just wish it had its own self-contained storyline, and I’m disappointed that your female MyPlayer cannot be brought into the main multiplayer space: The City. You can play with other players in The W Online, but playing in a small gym isn’t the same experience as having tons of shops and courts at your disposal.

The City is an evolution from The Neighborhood, where players come together in a multiplayer space with their created MyPlayers to play pick-up games and shop. The City is a big attraction, and exclusive for this next-gen version of the game. It’s clear Visual Concepts has some big ideas for it, as you get assigned an alliance and help build up its reputation by participating in events. I enjoy walking through this massive metropolis, stumbling upon special vendors selling unique apparel, and unlocking special challenges like teaming up with cover star Damian Lillard to take on legends Clyde Drexler and Terry Porter. You even get to spin a wheel for a daily log-in bonus that gives you cool freebies. Most recently, I scored a free tattoo, which made me happy because spending VC (which you can earn in-game or spend real money to acquire) isn’t my thing, especially for cosmetic items. Unfortunately, if you’re like me, you’re most likely going to be grinding to get anything cool or hoping your luck serves you well when you spin the wheel – though I have yet to get a high-tier item that way. Good items are very expensive, and grinding for them requires an unreasonable amount of patience; it feels like a blatant effort to drive players toward microtransactions, which feels gross.

The City is a cool idea, but it is also where the biggest problems surface. To enter The City, you must first get your rank up by grinding out wins in Rookieville. This is miserable, as you’re in a sequestered area where you can’t access any part of The City and must just wait for games and play with others. Losses don’t do much for your rank, so every game feels like you’re fighting for entry to the show. I encountered many players who had clearly bought VC to boost their character’s stats and put themselves at the best advantage – which makes it even harder to win if you don’t pay real money yourself.

As I walked around Rookieville, I rarely came across a player who wasn’t rated 86 or higher. Badges only further complicate this, because badges can let you make unrealistic shots or avoid easy steals. This has made me hate online play, because the games don’t unfold fairly or realistically. They’re just not fun. Visual Concepts needs to figure out a better way to reward teamwork, because players don’t want to pass the ball and just shoot all day long with these modifiers. It’s becoming more of a problem, especially as online play continues to be a focus.

Outside of these frustrations, you can still expect the other basic modes and some tweaks. My NBA is now an all-encompassing franchise mode, combining MyGM, MyLeague, and MyLeague Online. It gives you more customization options than ever before, from toggling certain league rules to bypassing some of the annoying role-playing elements. MyGM is still in need of a complete overhaul, even if I do appreciate the revamped boom/bust system and more variation in player potentials. I also enjoyed that there are some little variations from the old-gen version, such as a new path in Junior’s MyPlayer story, where you can join the G-League and brush shoulders with some familiar players from the series’ fiction.

NBA 2K21’s full-team on-court action plays the best it ever has, and the graphical leap is impressive to boot, but it still comes up short in some key areas. Visual Concepts still hasn’t figured out a great way to elevate its online play, and microtransactions continue to destroy what should be a fun part of the experience. I love creating specular plays and the thrill of sinking a buzzer-beating three, but the moment I walk into the online space, that feeling evaporates. It becomes about the money, not about the love of the game. 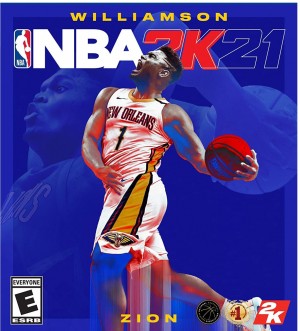 Summary: The full-team on-court action plays the best it ever has, and the graphical leap is impressive to boot, but it still comes up short in some key areas.

Concept: Built from the ground up to leverage the new consoles’ power, this edition brings faster load times, better physics, and new features alongside gameplay improvements

Graphics: This is the best the series has ever looked, from the ultra-realistic player models and their on-court moves to the expanded crowd and their reactions to plays. Even with occasional graphical hiccups, the overall tech is at a new, impressive level

Sound: Excellent commentary not only responds appropriately to the play at hand but also educates you on the league and its history. New songs join the already-stellar soundtrack to give you great background beats

Playability: The mechanics are easy to learn, but putting it all together on the court takes time, patience, and high basketball IQ. Online features, like The City, are not newcomer-friendly

Entertainment: NBA 2K21 takes some great steps to bring the series into a new generation and impress on the court, but some parts of its game still need work