Returning to the world of Samurai Jack

It has been an amazing road for Samurai Jack since it originally aired on Cartoon Network back in 2001. Genndy Tartakovsky’s epic vision of noble samurai’s heroic quest to undo evil immediately struck a chord with people around the world and would go on to spawn a legacy that still inspires legions of fans to this day.

Now, Samurai Jack returns once more this Friday for an all new video game, Samurai Jack: Battle Through Time. As the game readies for release, Samurai Jack creator Genndy Tartakovsky and series writer Darrick Bachman reflect on what it was like returning to the franchise after Jack’s dramatic series finale.

Did you think you were coming back to Samurai Jack after the show ended?

Genndy:  I thought I was finished with Samurai Jack. So when the proposal for the game came up, initially I wasn’t excited because of my past experience. But then as things started to come together, I realized it was going to be quite different and of a more unique quality. Then I got excited for Jack to live on past the show.

Darrick:  Returning to the world of Samurai Jack didn’t seem like much of a possibility after the season five finale. The series culminated with the completion of Jack’s quest, returning to the past to undo the future that is Aku, so that didn’t leave room for much else to be explored. In addition, Genndy had been on a near ten-year journey to finish Jack’s story, so the team’s thought was that we’ve finally done what we set out to do. However, the game gave us some new beats we hadn’t considered.

What was it like returning to the world and characters?

Genndy:  It’s always a warm experience, like seeing your kid return from college.

Darrick:  As work got underway on the game’s narrative, we found that sliding back into the world and characters wasn’t as difficult as imagined. We had finished the fifth season only a few years prior, so characters like Ashi, the Daughters of Aku, and Scaramouche were still rattling around in our heads. The real challenge came from revisiting the characters and locations from the first four seasons. You suddenly find yourself having to rediscover Jack’s relationships with amazing characters like the Scotsman or Da Samurai, be immersed in the action of facing off against foes like the Imakandi or travel to places like the graveyard from episode 30. It was such a thrill to play in that world again. 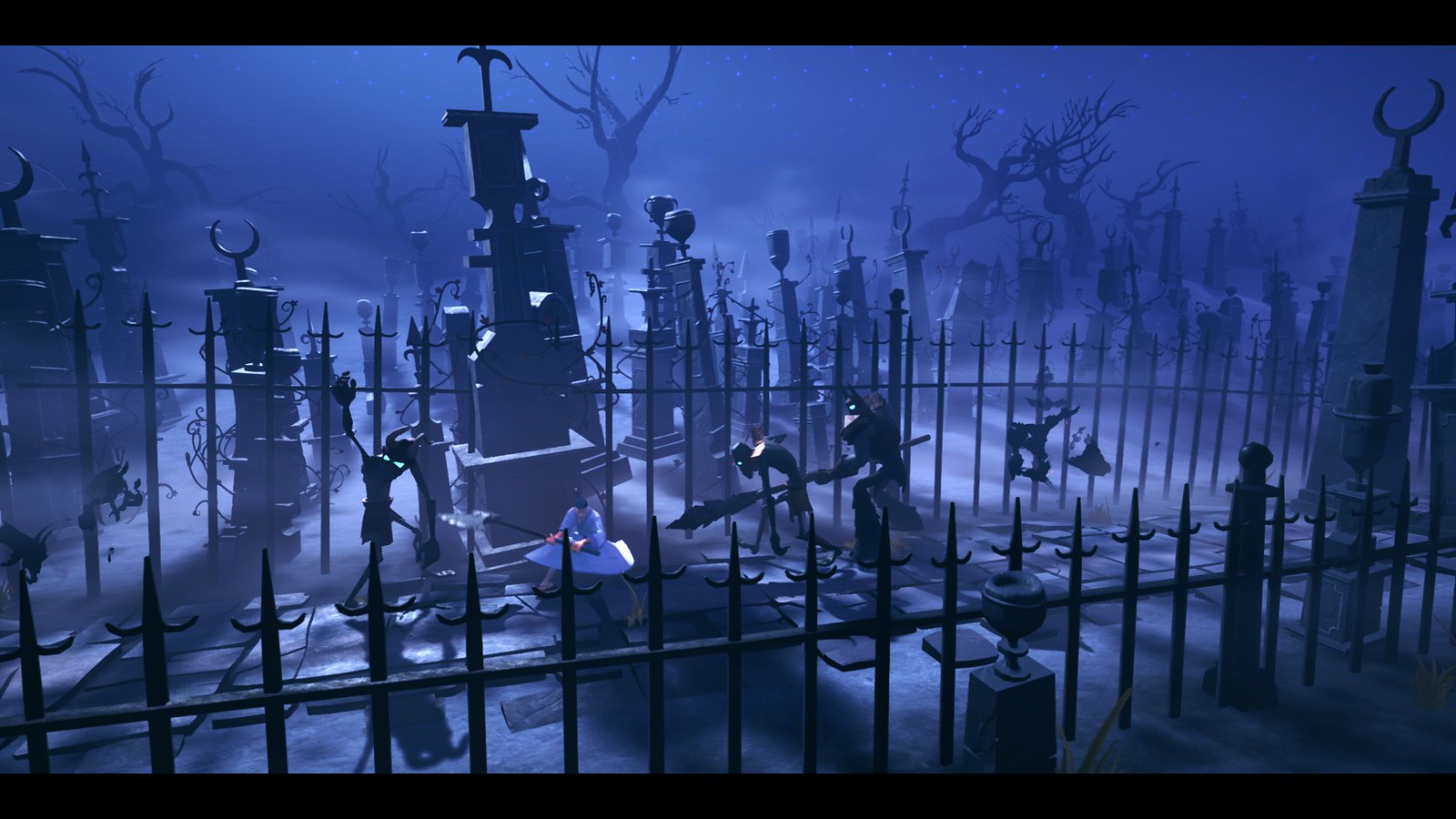 What’s it like being able to not only see, but fight with or against the characters you were writing for?

Genndy:  It was super fun! I didn’t realize how many different characters were put into the game. Making the TV episodes was really the same thing as each episode I get to fight whatever I’m drawing, but this was a much more fun experience in a way because it was immediate action.

Darrick:  I really didn’t know what to expect when we first got the chance to demo the game at Soleil Game Studios in Japan. There had been some attempts to do Samurai Jack games in the past, but none had quite lived up to the level of the series. Needless to say, this game was amazing right from the start! The Soleil team are truly phenomenal and have worked tirelessly to bring Jack’s world to life. They are also huge fans of the series, so it was a real labor of love to capture the look and feel of the series in a 3D environment.

What was it like picking up the controller and playing the game?

Genndy:  It was strange, but fun! I usually am used to doing all my Jack battles with pen and paper, but now it was easily accessible to me with a press of a button.

Darrick:  It literally gave me goosebumps. Seeing Aku City realized in a 3D space and making Jack run, jump, and battle his way across was just incredible. And to fight the Scotsman?! It was all so much fun! 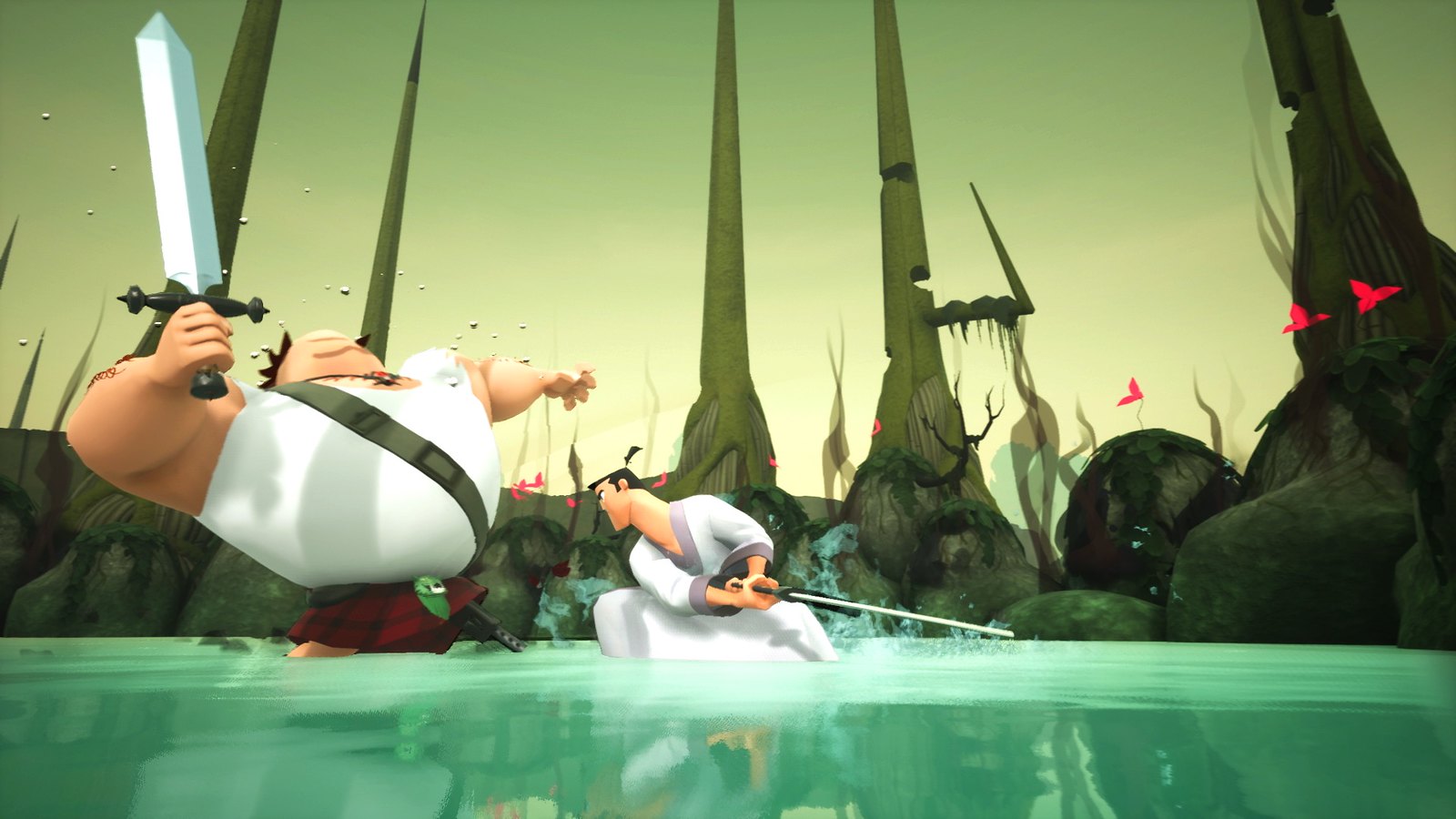 Who is your favorite character?

Genndy:  Aku was always my favorite. As what usually happens is the villains have the most interesting personalities.

Darrick:  Without a doubt, Aku is also my favorite character in the Samurai Jack universe. Not only is he the ultimate villain, but there are so many layers to his personality which makes him irresistible. He can be sad, jealous, giddy, dramatic, pathetic, or all of these at the same time. His relationship with Samurai Jack is also incredible because they are such polar opposites. Jack is so stoic and heroic and Aku is just a big hot mess. Even watching him order a pizza can be both sinister and the funniest thing you’ve ever seen. It’s a writer’s dream to have characters like Aku because his personality can go in any direction and the end result is always surprising. 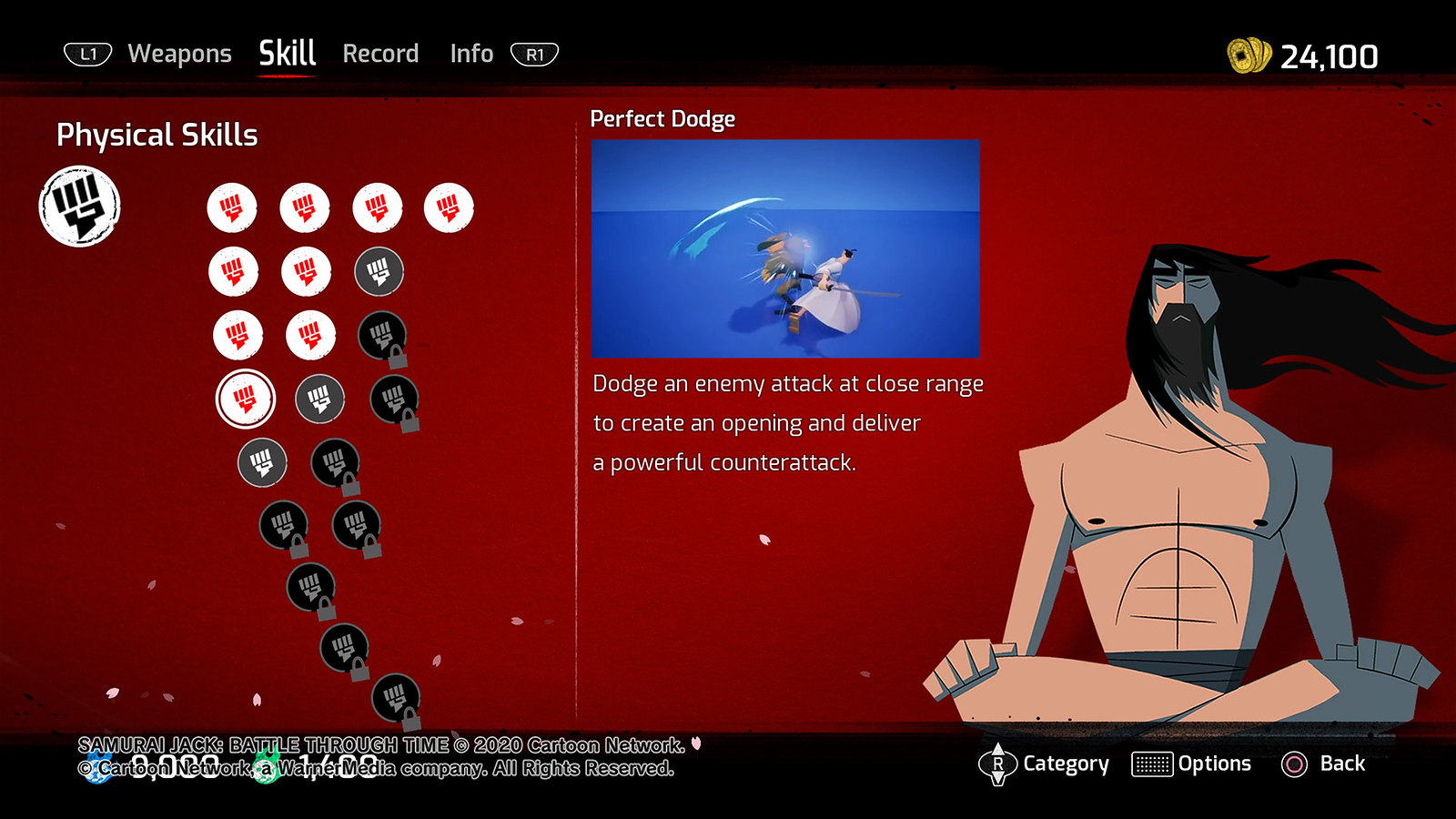 Did the game give you any opportunities to flesh things out or make changes you didn’t have time to while working on the show?

Genndy:  No, through five seasons of doing the show we really did everything we wanted to do, so this was more of a way to go back in time and enjoy Samurai Jack on a nostalgic level and get an opportunity to be Jack yourself.

Darrick:  By the end of the fifth season, we felt as if Jack’s story had been put to bed and there wasn’t much left to do. Then as Genndy and I began to discuss the game, and how the studio really wanted this to feel like an all new episode of the series, we did start to explore if there were any possible ideas or story points that didn’t get fleshed out during that last season?

As we re-watched the series finale, there was a moment near the climax – a fifty second window where Jack and Ashi travel through the time portal while offscreen. I found myself suddenly obsessing over what happened during that period of time. Did they just travel through time and space without incident? What if Aku made one last desperate attempt to stop Jack inside that portal? Time is infinite, so Jack and Ashi could get trapped in that portal for years, decades, and it would only appear to be seconds in our world. Genndy and I became increasingly intrigued by that fifty second window and that became the basis for the video game narrative. 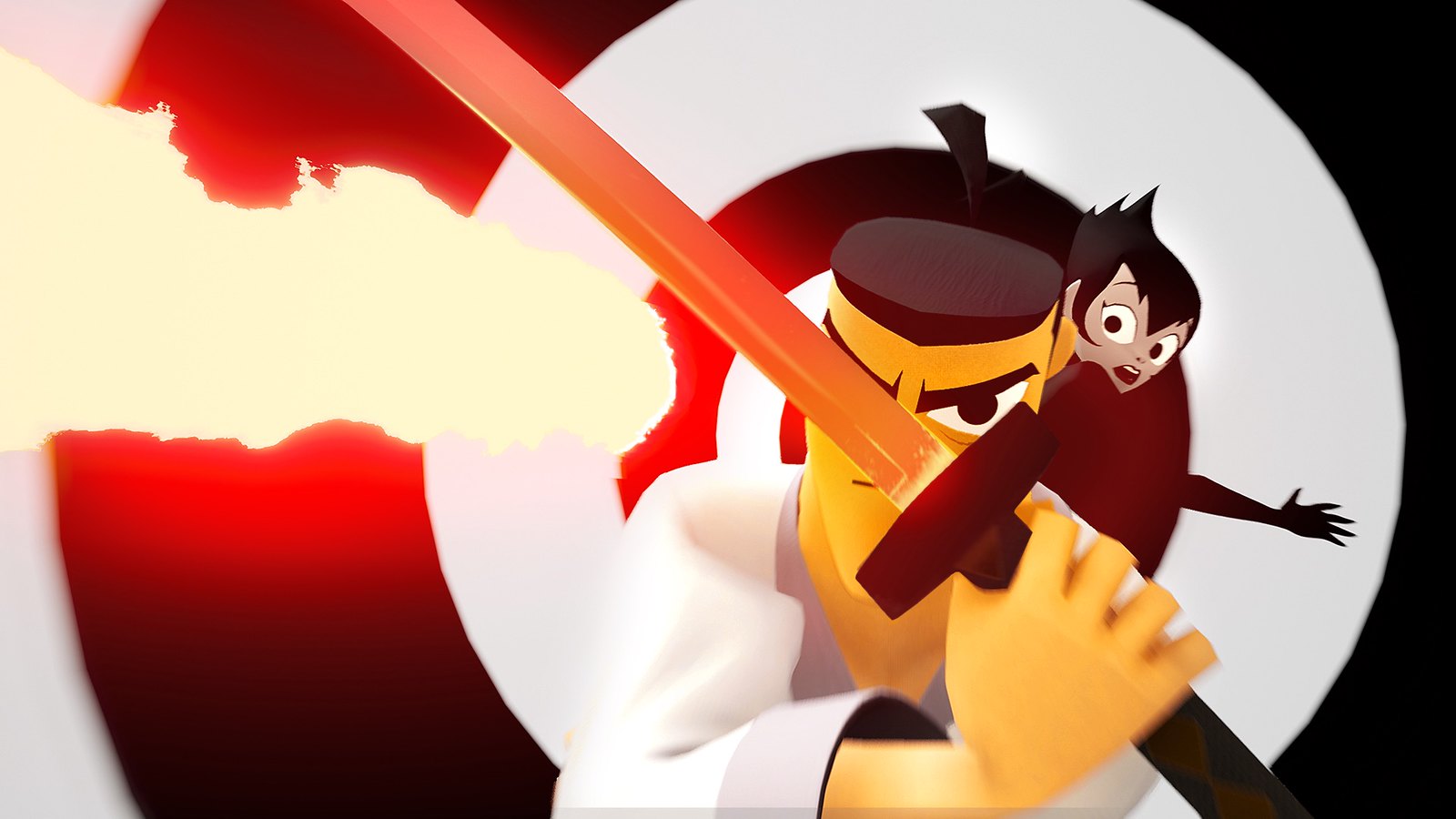 For Darrick, what was it like working again with the Samurai Jack creative team, including the voice actors?

Darrick:  Samurai Jack was my first job in animation so, for me, being able to return to the project and reunite with the creative team has been really special. Just the recording sessions alone felt like a big family reunion. So many of the original, amazing voice actors like Phil LaMarr, John DiMaggio, Tara Strong, and Tom Kenny returned to breathe new life into their characters, and it takes the game to a whole new dimension. In addition, it was an amazing experience to watch the voice actors just slot right back into the characters, some of which they haven’t voiced in 17 years.

For Genndy, as a creator of so many beloved worlds, are there any other characters you have created that you would like to see in a video game?

Genndy:  Sure! Really all of them!! They all could work in a fun way. Dexter chasing Dee Dee around a vast lab sounds promising!!

Genndy:  Well it is complete but having said that I’ve learned that there is really truly nothing ever final. So who knows in the future where and what might happen…

Darrick:  Jack’s story concluded so definitively that it would be hard to return for more adventures. You don’t want to risk undoing or lessening what the series achieved, even if a tiny part of your heart hopes that Jack’s story isn’t quite over yet. Fortunately, we were approached about doing the video game and that has given us this opportunity to play in the world of Samurai Jack once more.

We truly hope that fans will enjoy this all-new Samurai Jack story and get caught up in the excitement of getting to be Jack as he battles the evil that is Aku once more. Samurai Jack: Battle Through Time comes out on August 21 on PlayStation 4. 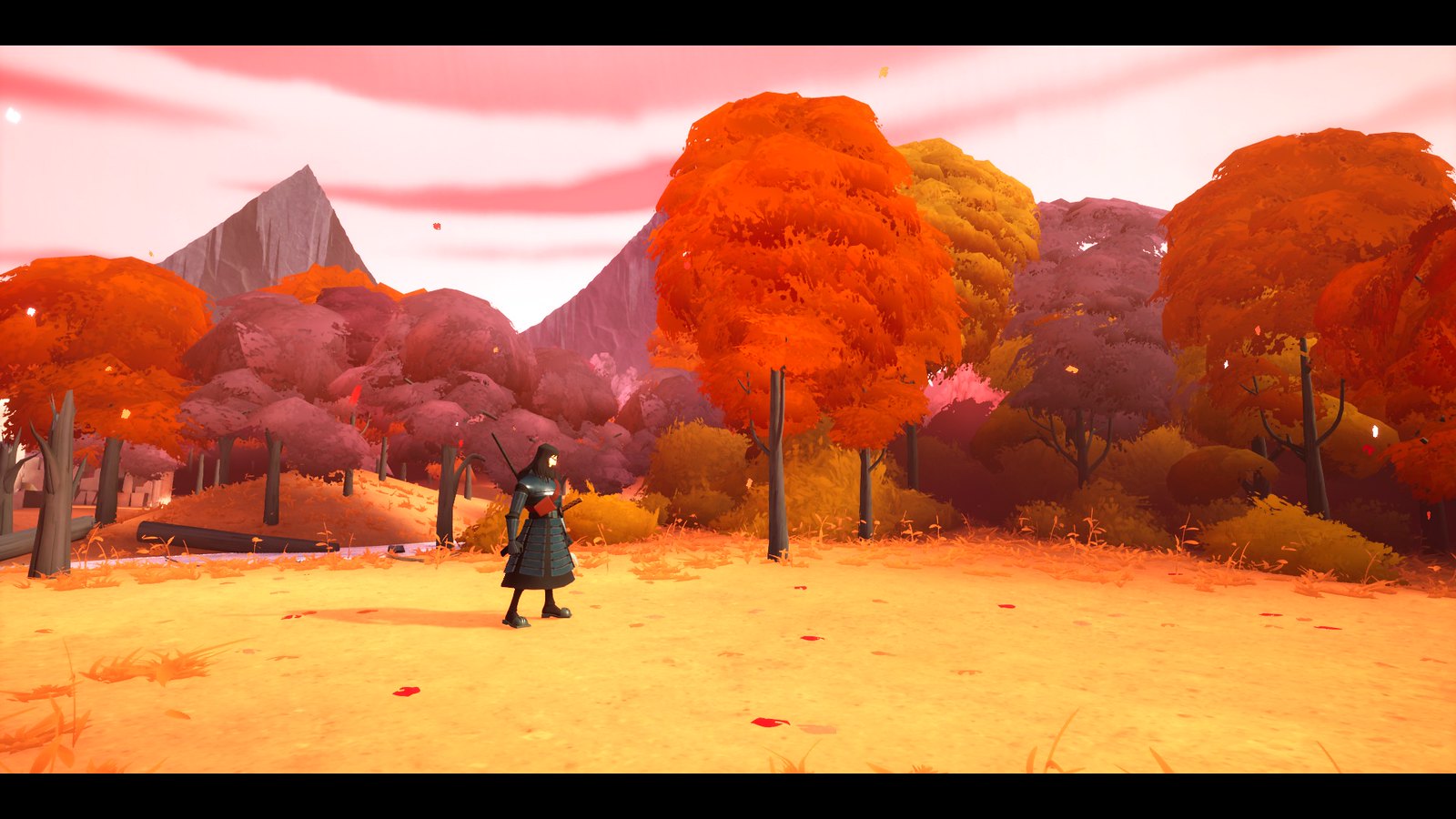