Hello, friends! We have a lot to celebrate today. Not only are we observing Puyo Day (because in Japanese, 2-4 sounds like “Pu-Yo!”), and a brand-new update to Puyo Puyo Tetris 2, which we’ll get to in just a moment, but we are also celebrating the 30th anniversary of the entire Puyo Puyo series!

That’s right, fellow old-timers like myself, Puyo Puyo was first released way back in the ancient era of 1991. Since then, the series has had a rich history of appearing on a wide variety of platforms, including every single PlayStation console. Fans may have spotted the series in our other titles, like Yakuza and Judgment, as one of the playable arcade machines.

It’s been a long journey to this point, and we’re not slowing down. As part of our Puyo Day celebrations, we’re proud to announce that the second in our series of free post-launch updates for Puyo Puyo Tetris 2 is now available!

Today’s update ushers in a variety of fresh content for players, including four new playable characters – Serilly, Rafisol, Possessed Klug, and Yu & Rei; 3 new background music tracks for players to enjoy as they play, (revisiting some of Puyo Puyo’s past hits); 20 new avatars for players to customize their in-game profiles with; and Color vision accessibility settings that include adjustments for color saturation that can be toggled on or off at any time. Additionally, all six Challenge modes that were previously only available offline in single-player mode can now also be enjoyed online with up to three of your friends/foes! 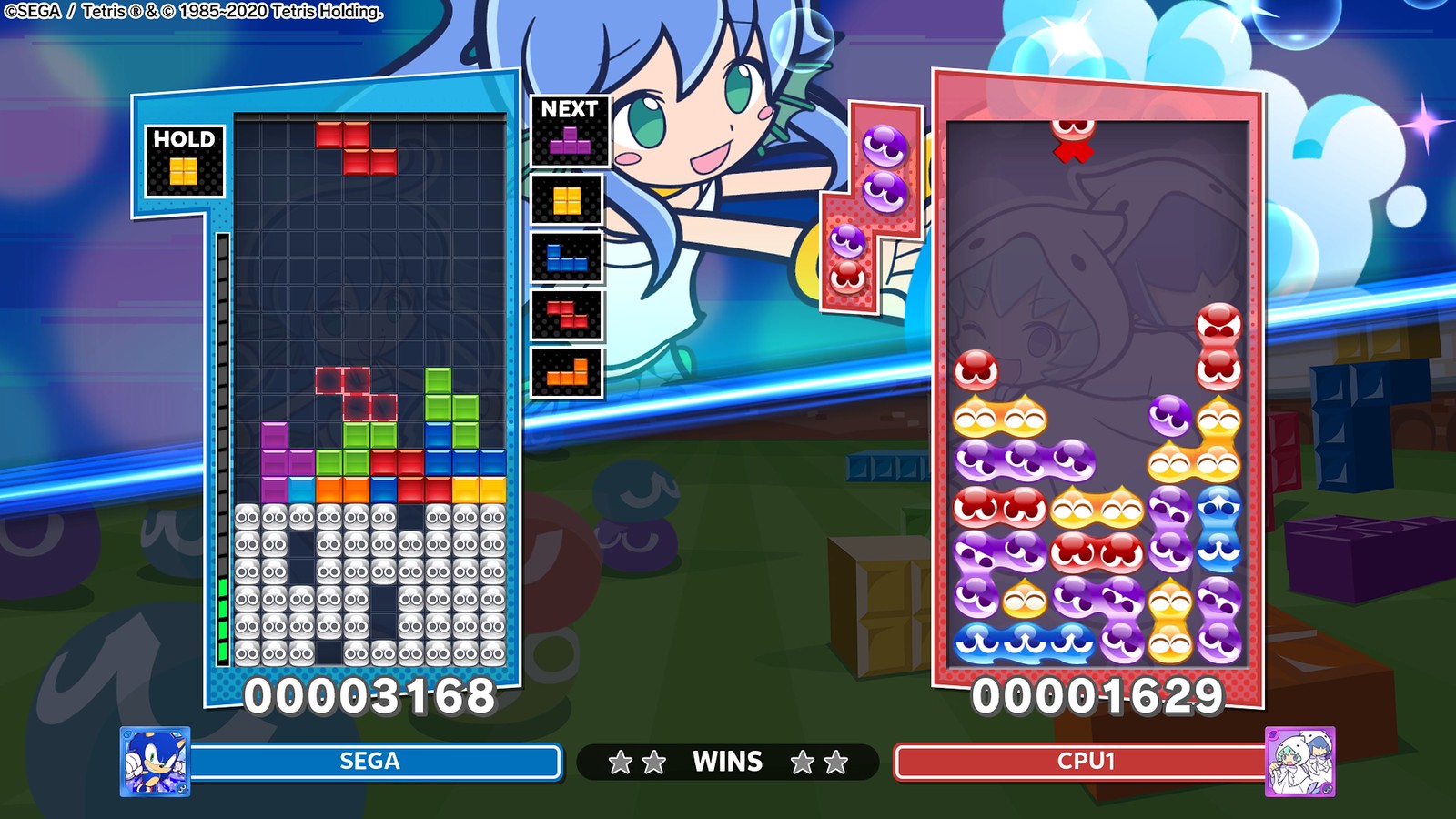 As we did last month, we’d like to provide a short introduction to each of those new characters I mentioned, along with what they bring to the table for the game’s Skill Battle mode where you’ll use unique character skills and special Item Cards to defeat your opponents.

Serilly is a timid mermaid who is kind of a crybaby. She has highly effective buff and debuff skills in her arsenal. While she did appear as a playable character in Puyo Puyo Champions, this update marks her debut in the Puyo Puyo Tetris series! 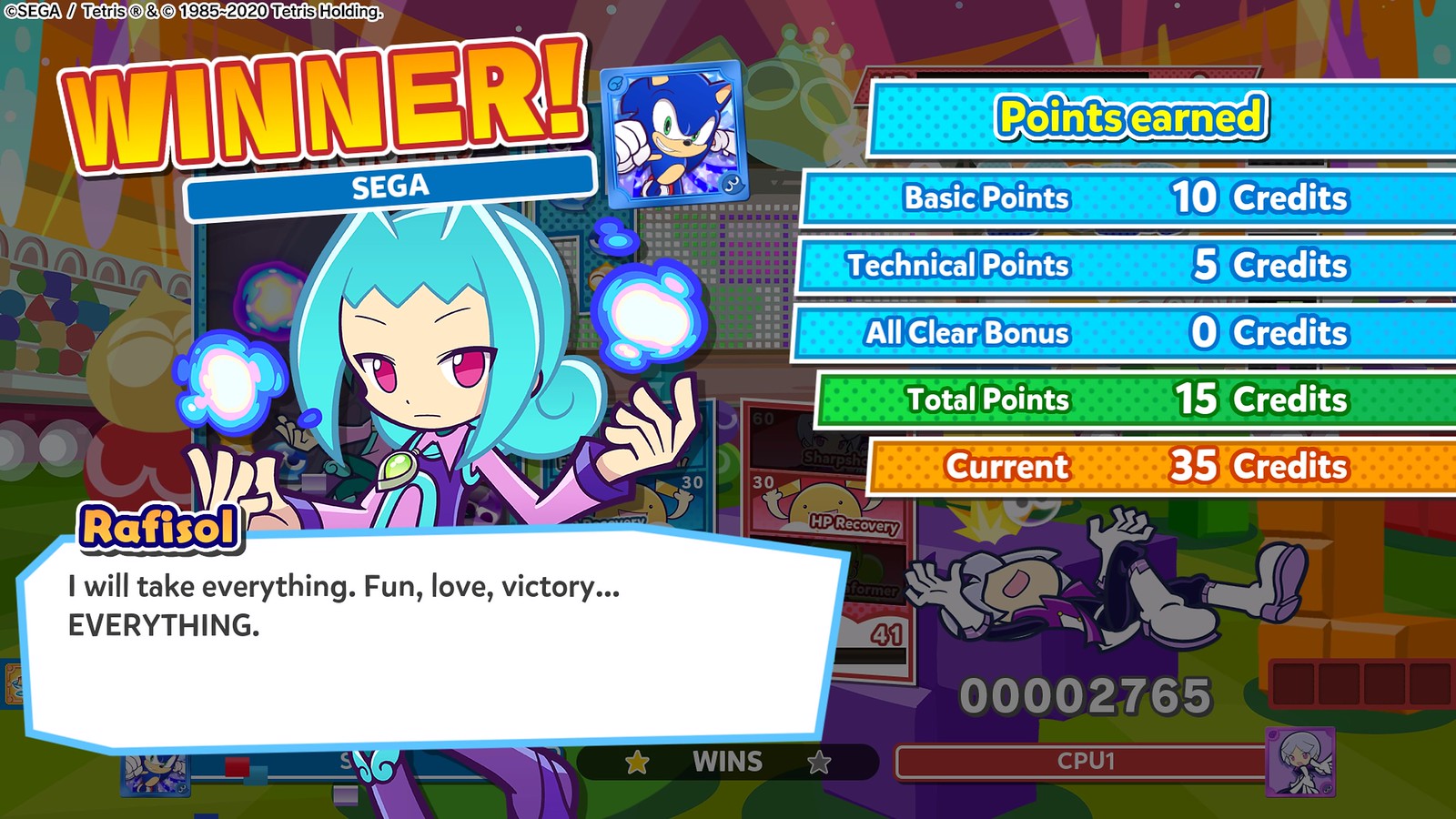 Next is Rafisol, a mysterious being from an unknown world hiding a hideous power with the ability to, among others, change the shape of the Tetrimino in your possession. Those who may have been following along last year would know that Rafisol was added as a secret unlockable character in Puyo Puyo Champions just two days before we announced Puyo Puyo Tetris 2, so this feels particularly special.

Yu & Rei are ghostly twins with a chilling degree of pun and trivia knowledge who have a skill that removes up to 32 pieces of incoming Garbage Puyos, which can prove critical in a pinch. Although Yu appeared in Puyo Pop Fever as a playable character, her twin brother, Rei, makes his first appearance in the West. 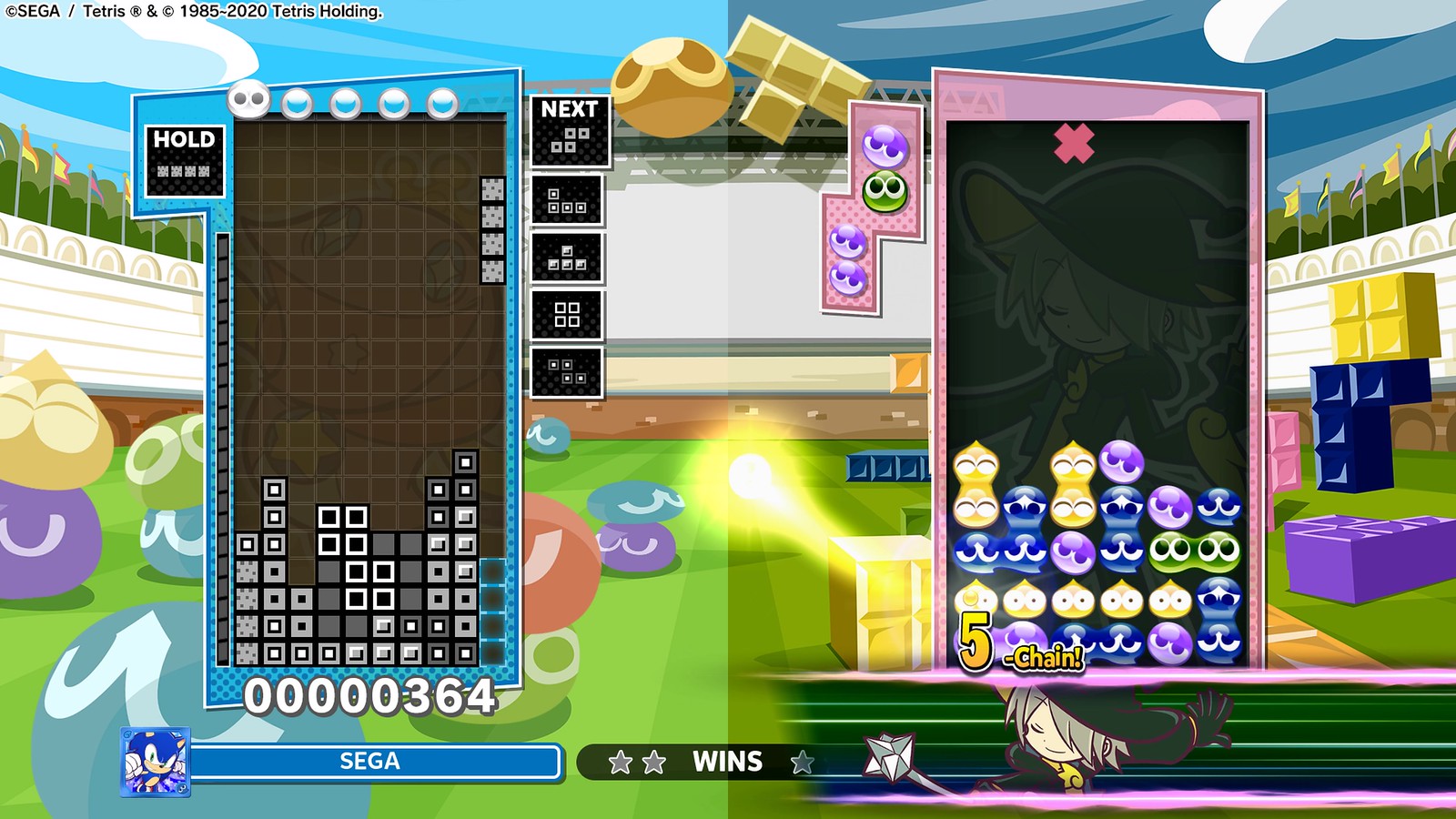 Finally, we have Possessed Klug, an evil crimson spirit that has taken over Klug’s body, with a powerful skill that can set up a powerful T-Spin attack. In my opinion, this is an especially notable addition to the character roster because this marks the first time that Possessed Klug has been made playable in a Puyo Puyo game outside of Japan. Moreover, he hasn’t been playable since the Japan-only Puyo Puyo 20th Anniversary game, so something tells me Puyo Puyo fans will be excited about this one!

Puyo Puyo Tetris 2 is available right now on PlayStation 5 and PlayStation 4 both physically and at PlayStation Store. Be sure to download this latest free update to enjoy all the amazing content we’ve added to the game. In case you missed it, we also added Sonic the Hedgehog as a playable guest character and a new online Boss Raid mode, which you can read about in our previous blog post. Lastly, make sure to follow the official Puyo Puyo accounts on Twitter, Facebook, and Instagram for all the latest!