We’ve found the legend in Kyiv – PSG.LGD are our AniMajor champions!

It all came down to two. After 11 action-packed days, PSG.LGD and Evil Geniuses were our last teams standing at the AniMajor.

The stage was set for a battle between two of the world’s top Dota 2 teams, and only one would come out victorious on the other side of the Bo5.

We break down all the biggest and best moments from our thrilling Grand Final series.

Our first map of the series saw PSG.LGD deliver a crushing defeat to Evil Geniuses.

Things started off slowly, with first blood finally drawn just past 6-minutes. But then a skirmish around the 12-minute mark in the mid lane gave Ame a double kill and helped LGD cement their lead coming out of the lanes.

Once they picked up momentum, there was nothing LGD could do to stop them as the Chinese team snowballed toward a fast win.

Ame and NothingToSay were absolutely indomitable over the 33-minutes of Game 1. Ame’s decision to pick up a Blink dagger ahead of his BKB gave the team plenty of opportunities to force skirmishes out on the side of EG. And NothingToSay managed to pick up his BKB by the 19-minute mark.

But the supports weren’t sloppy either, Zhang “y`” Yiping scored 22-assists this game, while also netting 3-kills of his own.

LGD closed the game with a 24-kill lead, with the final score 30-6 when GG was called.

It had been a disappointing start to the series for EG. But they still had four games to make the most of it. This is exactly what they did coming into Game 2.

It was a Nature’s Prophet pick again for Artour “Arteezy” Babaev, and he managed a better performance on the hero this map. He picked up his BKB by the 17-minute mark, giving himself plenty of escape options. (Something which has been necessary for poor Arteezy thanks to the rash of clifteezys inflicted upon him at this event.) Andreas “Cr1t-” Nielsen also had a better time in Game 2 on his Earth Spirit. He managed to set up more than a few kills for his team in the early game.

EG had 12-kills on the board by 10-minutes and a 3.5k lead in the gold. It looked like they were going to give LGD a taste of their own medicine.

But the Chinese team showed discipline, holding out admirably until the late game. But their draft had a lot of holdouts, with y` on Enchantress and Zhao “XinQ” Zixing running Shadow Shaman. By the time the game passed the 30-minute mark, Ame was looking fat on his Terrorblade and NothingToSay’s Death Prophet was about to become a big problem for EG too.

At 41-minutes EG managed a successful Roshan attempt, taking the aegis for Abed’s Storm Spirit. But a freshly spawned double damage rune for DP spelled trouble for EG’s defensive line. Heedless of the danger that an aegis could spell, LGD pushed up the mid, taking the T2 and T3 towers and the barracks out.

LGD snatched the second map back from Evil Geniuses with a spectacular turnaround. With two games under the Chinese team’s belt, everything was on the line for EG as we moved on to Game 3. 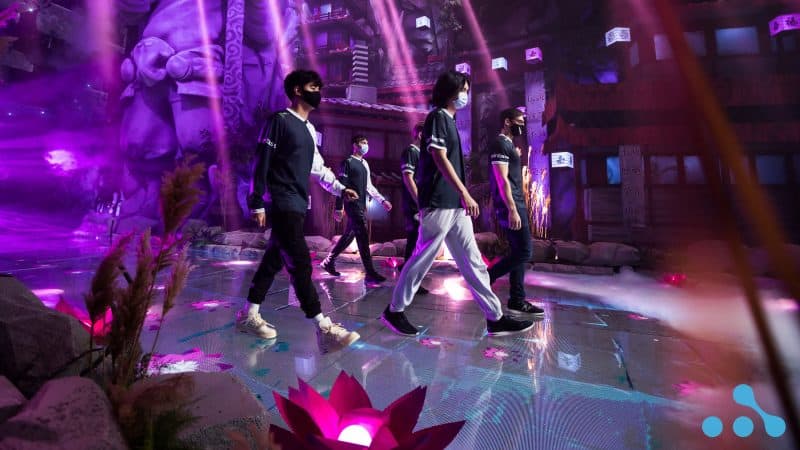 LGD took out first blood just before 4-minutes on our third map, with Zhang “Faith_bian” Ruida’s Axe bringing down EG’s Captain, Tal “Fly” Aizik. Still, EG managed to get some value out of the lanes. Even building themselves a 3k lead in the gold.

Arteezy had taken the Terrorblade on this map, while Ame was running Naga Siren. (A bit of an amusing switch considering Arteezy’s prescience on Naga in the past and Ame’s penchant for TB.)

But it was really the support choices that pushed LGD over the line in this game. XinQ was spectacular on Mirana, scoring 23-assists.

But LGD were playing to win, taking a full team wipe on EG at the 20-minute mark which put a big dent in that small lead. The Chinese team took the map over from there. Building swiftly to a 10k net worth lead by the 30-minute mark.

EG didn’t get a chance for a comeback, as LGD cut them down, relentlessly, ending the game at 36-minutes to take the AniMajor trophy. 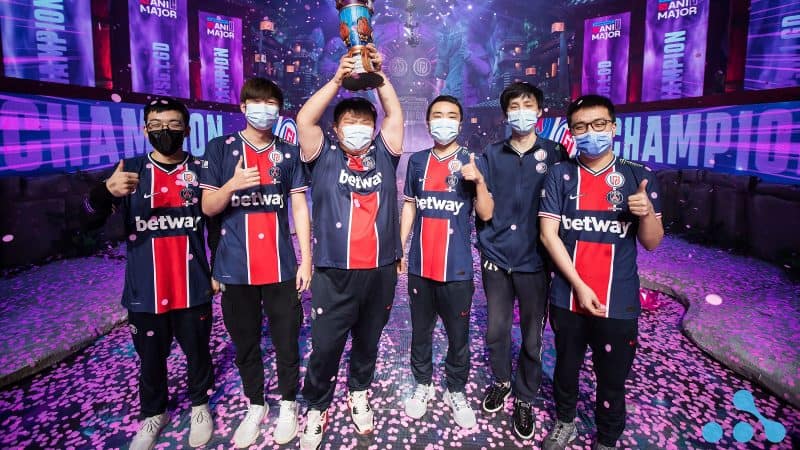 Here’s the distribution for the prize pool and DPC points at the end of the tournament:

After eleven days of top-notch Dota, the second Major for the year has come to an end. While this was a closed LAN event without an audience, WePlay Esports still managed to create the hype and atmosphere that we’ve grown accustomed to seeing at DPC events. With performances from artists like TOKYO MACHINE and one of the most elaborate and engaging sets we’ve ever seen at an esports event. Over 640,000 viewers tuned in across the 137-hours of airtime. Making the AniMajor the second most-watched Dota 2 Major of all time. 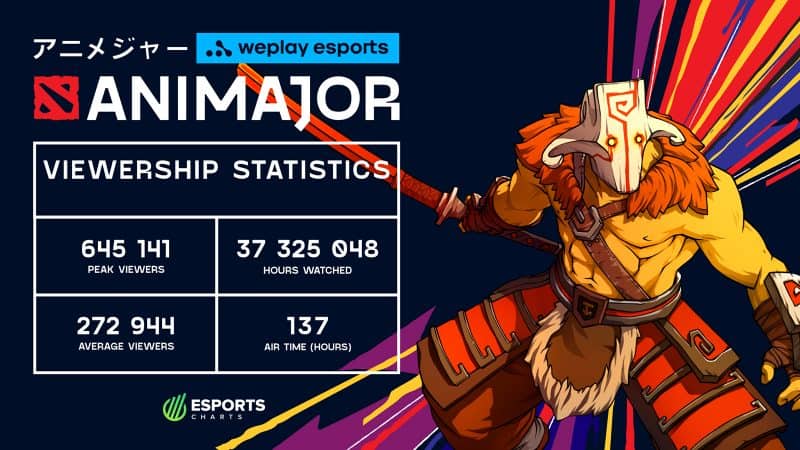 Be sure to stay tuned to ESTNN for all the latest Dota 2 news and highlights as we gear up for TI 10 in August!