G2 on the rise again, Misfits went 0-2, and one of their losses was against Astralis – whose mid laner pulled an xPeke.

We are back with the weekly power rankings of the League of Legends European Championship! Much has changed since Week Two, like G2’s fall and rise, the arrival of the Avatar to the LEC, Fnatic’s journey to the top again, Excel’s roster changes and Astralis’ fight to survive. Let’s get right into it!

It’s now certain that this season will be FC Schalke 04’s last one, as they sold their spot to help out the struggling football team. Team BDS will be taking their place from 2022, so Schalke still has some weeks left to add to their legacy. Sadly, they aren’t looking too good, losing five of their six matches since Week Three.

Even though they dominated Fnatic in the second match of Week Four, they struggled to beat last-place team SK Gaming and also lost against Astralis. Without these wins, FC Schalke 04 has little chance to make the playoffs. Miracle runs can happen, and Schalke had one of the greatest comebacks last season, but they would have to win virtually every match – which seems to be impossible.

SK Gaming got a new support before Week Three began, and they found success with Philipp “Lilipp” Englert. The german Support helped SK Gaming achieve their first victory this split in Week Three against Excel Esports. SK also beat Schalke 04 on the first day of Week Five, so Lilipp was certainly an improvement.

But with the plethora of problems SK Gaming faced at the beginning of summer, they have no chance of playoffs after they went 0-6 after the first few weeks. They are currently standing at the last place with 2-9, and hopefully, they are looking for things to change and improve for 2022.

Excel Esports is 8th in the LEC and also in our rankings. They were supposed to be the team to look out for after Erlend “nukeduck” Holm joined before the start of summer, but they failed to find major success. While Nukeduck was certainly an improvement, the team struggled in other areas and went 2-5 in the first three weeks.

Excel looked to step their game up by bringing in Academy players Mark “Markoon” van Woensel and Henk “Advienne” Reijenga to the jungle and support positions. After the new players joined, they went 2-0 in Week Four and looked like the team they were meant to be. Beating G2 and Vitality is no small feat, but they quickly fell back to their usual form in Week Five, going 0-2 against MAD Lions and Fnatic. They might need time to adjust to the new roster, but time is the one thing they don’t have a lot of.

Team Vitality was really difficult to rank after Weeks Three through Five. On one hand, they beat G2 Esports and MAD Lions, who were struggling, but are still two of the strongest teams in the league. On the other hand, they got beat by Astralis and Excel Esports, who are considered to be weaker teams than the star-studded Team Vitality.

The team still struggles with the same problems they struggled with since Week One: Vitality is the definition of feast or famine. When they win, they seem to smurf on every team they face, but when they lose, they look like the weakest squad of the LEC. One positive thing is that they try to improve things they can, like bringing in Mathias “Szygenda” Jensen from the Academy roster to replace Enzo “SLT” Gonzalez, who had a hard time in the previous weeks.

Astralis, or rather Felix “MagiFelix” Boström, really showed up in Week Five. After getting beat by all the top teams, Astralis faced new kids on the block Misfits Gaming. They were behind in gold for the whole match, lost the first turret and first blood to the Rabid Rabbits. But Astralis’ mid laner came to the rescue, backdooring Misfits’ Nexus at 43 minutes, making Enrique “xPeke” Martínez, the team’s shareholder proud. 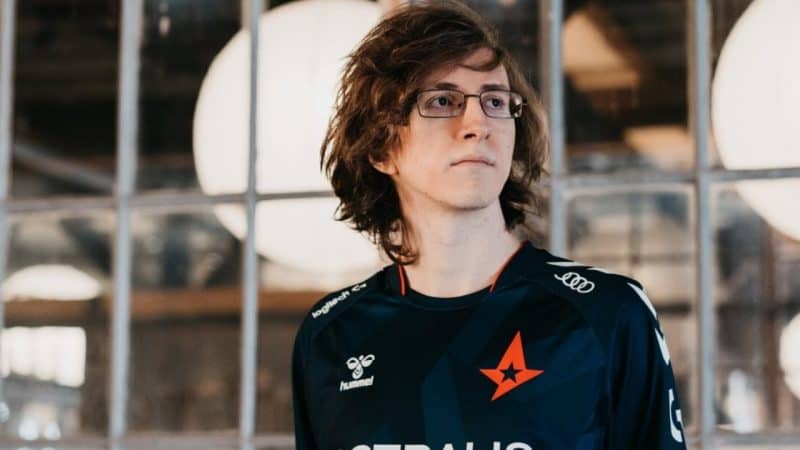 Even though the win against Misfits was crazy, Astralis still can’t win against teams like G2, Rogue and MAD Lions. They might make playoffs but it’s uncertain how far they’ll get.

This split, the LEC has a clear-cut top five, which is constantly changing within itself. Misfits is still a very strong team, but they had a fairly weak showing in Week Five. We talked about the blunder against Astralis, but they also lost to Rogue by a lot, being down 10 kills and almost 10k gold at the end of the match.

While they beat G2 on the second day of Week Four, they were behind the whole match and needed some luck to snatch an Elder Drake right from the hands of the Kings of Europe, which helped them win the match. They will definitely make playoffs but they need to find consistency, and their bot side needs to step up in order to make Worlds.

G2 Esports had the biggest slump of the 2021 season in Week Three and Four, going 0-4, losing the first round of the LEC El Clásico (Fnatic vs G2), and even losing to Excel Esports. Every team has rough patches sooner or later, but G2 looked really bad. Rasmus “Caps” Winther and Martin “Wunder” Hansen were at the bottom of the league in multiple stats, and the whole team looked out of place on the Rift.

Only the Avatar, master of all mid lane champions could save G2. And when the League scene needed him the most, he delivered. Bald Caps has been the topic of many memes before and after Week Five, but the change worked: G2 looked dominant again, going 2-0 in last week, beating Rogue and Astralis. But the thing is that they had an easier time against Rogue than against Astralis, with Stephen “Hans sama” Liv and Adrian “Trymbi” Trybus inting a little bit at the start of the match. Perhaps they were blinded by the glorious head of Caps? 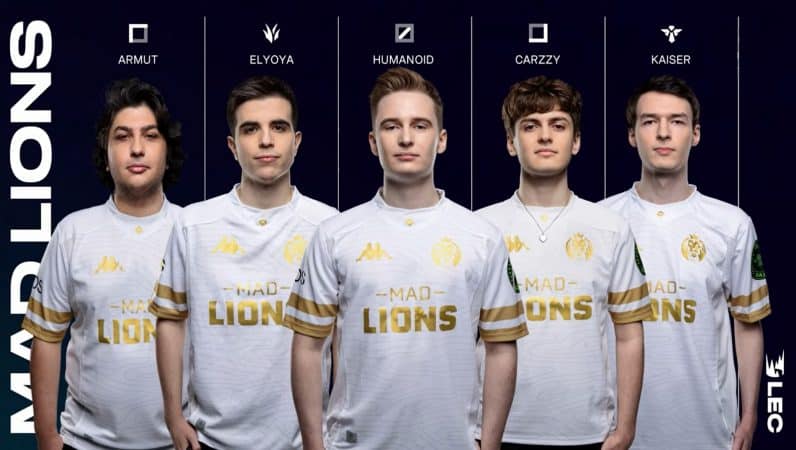 Spring Champions MAD Lions are starting to look like their old selves. Javier “Elyoya” Batalla told the audience that they were a bit burnt out after competing in MSI and having to deal with a double quarantine after two of MAD Lions’ employees tested positive. They are also the only team to still play remotely while other squads have returned to the Berlin LEC studio. The burnout hurt Irfan “Armut” Tükek the worst, who had outright terrible games, even though he dominated Spring Split.

But after a rough start, they are back in form, going 2-0 in Week Five, also beating Misfits Gaming in Week Four. MAD Lions will definitely make playoffs and are likely to make Worlds as well. Hopefully, they’ll have enough off-time to bring their best.

Rogue is back, currently tied with Fnatic for the number one spot of the LEC with an 8-3 score. They won five of their six games since Week Three by being the calm, collected and controlled squad that can beat virtually any team.

However, they are not untouchable, as G2 has shown in their last match. Rogue tried very hard in that match, but nothing seemed to work out for them. They had to be proactive because of their draft, Kalista and Dr. Mundo demand early leads, but G2 defended and counterattacked perfectly. Rogue’s curse of not being able to beat G2 in regular seasons seems to live on. 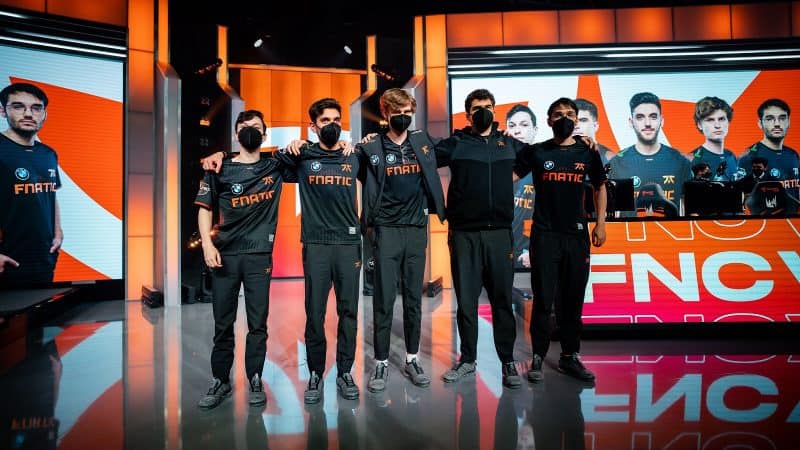 The biggest winner of the past few weeks is definitely Fnatic. The black and orange squad finally reclaimed their place at the top of the standings, as they are currently tied with Rogue in first place. They won five of their six matches, and even though they got beat by Schalke 04, they won the last chapter of the G2 – FNC rivalry.

Fnatic is looking great after Week Five, with rookie Adam “Adam” Maanane challenging the best top laners in the league. Gabriel “Bwipo” Rau is indeed a great jungler, just as Jakob “YamatoCannon” Mebdi said before the split started. The players are good individually and they have great chemistry on stage and on the Rift. Glad to see Fnatic back.

The LEC will continue with week six this Friday, kicking off with Misfits Gaming versus Excel Esports at 6 PM CEST!