As a big rhythm game fan from the Guitar Hero and Rock Band heyday, I feel like it’s a pretty underserved genre on mobile. There’s definitely a handful of great mobile rhythm games, but nothing that really scratched that Guitar Hero itch or filled that role of making you feel like a bad ass rockstar. Well the late great Freddie Mercury and Queen are here to answer the call with their official mobile game Queen: Rock Tour. Being a licensed mobile game in 2021 you’d be forgiven for thinking that Queen: Rock Tour is the worst of what mainstream mobile gaming is all about nowadays, but I’m here to tell you that this couldn’t be further from the truth.

First of all, Queen: Rock Tour is a premium game. Technically it’s free to download and play the first two songs, but unlocking the rest of the game is a single one-time $2.99 IAP. Incredible. On paper this type of game screams free to play, but that’s not the case at all. Secondly it is very apparent that Queen: Rock Tour was a labor of love from actual Queen fans. The game’s campaign recounts the band’s career during their peak from the mid-70s through the mid-80s. All the major hit songs you’d expect are here, and each leg of this “tour” through their history features these masterfully crafted cutscenes showcasing band photos, album covers, and other memorabilia from each particular era. This is a fan service game through and through. 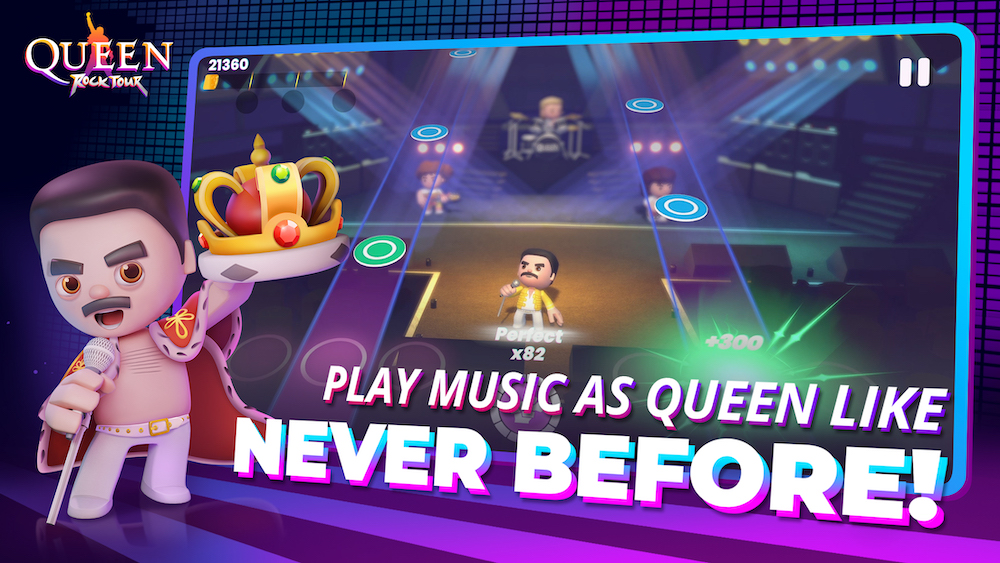 The gameplay is just as if not more important as the decoration in a game like this, and Queen: Rock Tour nails it here too. There are up to 3 lanes on each side of the screen where notes fall down and must be tapped in time with the song using either of your thumbs. You’ll play a mixture of every band member’s role: Guitar, drums, bass, and vocals, and if you mess up on a note that particular instrument will cut out from the song until you hit one of its notes successfully again, giving you that audible negative feedback that is so important in Guitar Hero and Rock Band but for some reason is always missing from mobile rhythm games. Queen: Rock Tour also utilizes haptic feedback in a really great way, meaning you can feel every note you hit.

There are 3 difficulty levels per song, and as the difficulty goes up so does the complexity of the notes and as a result so does the accuracy in which the notes relate to the song itself. I can’t tell you how many rhythm games I’ve played where it felt like I was just tapping colored dots that felt totally unrelated to the songs playing in the background. That’s not the case with Queen: Rock Tour. At the highest difficulty the songs get fast and complex enough that you reach that “in the zone” moment where your fingers feel like they’re reacting quicker than your brain is, and you’re sort of just amazed at the crazy finger stylings you’re pulling off right in front of your own eyes. It’s great.

There’s even more here, too, like unlockable costumes for all the band members and unlockable bonuses from the Queen archives filled with photos and little factoids. Of course this should all go without saying that if you’re somehow not a fan of Queen in any way, well, this game probably isn’t for you. Thankfully they have enough top hits that even if you’re not a devout fan you’ll definitely be familiar with a lot of the songs here, and the strong rhythm gameplay is a big draw even if Queen ain’t your jam. But it’s free to try anyway, so rhythm game fans, Queen fans, and combinations of those two should all give Queen: Rock Tour a download for themselves. For my money this is the best rhythm game I’ve ever played on mobile and in a perfect world more versions based on even more bands will arrive in the future.